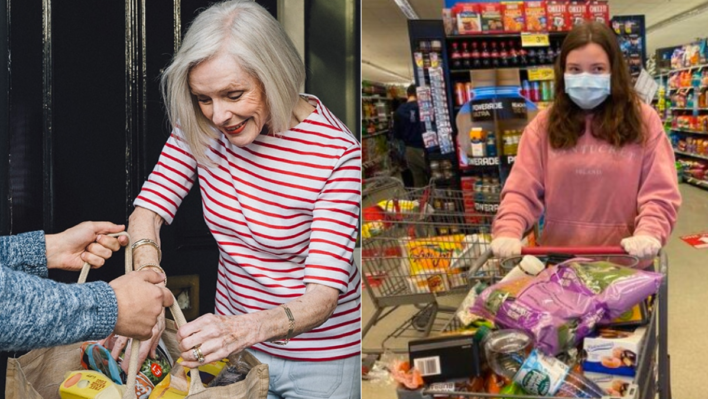 2020 was the year that the world changed for everyone. With the spread of the Covid-19 pandemic, everything that we thought that we knew about life was tested. Contracting coronavirus was something that many people feared, as little was truly known about the virus. As more information was gathered, it was clear that there were many individuals who were at risk.

One class of individuals who were at high risk was elderly. Scientists and reporters relayed that those who were 65 or older should refrain from going out in public and especially in crowded places during the height of the pandemic.

However, these individuals, of course, needed a way to get their basic necessities. It’s impossible to expect the elderly to survive without any help during a global shutdown.

Goldberg, whose father is an emergency room physician, was quarantined at home in Santa Barbara during the start of the coronavirus pandemic. Seeing his father go to work every day showed him just how serious the health crisis was. He told Forbes he wanted to find. away to do his part and help others during this time.

Goldberg said he realized that there were a lot of uncertainties happening in early 2020 when things shut down. One of the things he noticed was that there were many people in his neighborhood who were older, sheltering in place, but did not have a way to get the things they need—like groceries.

RELATED: Indiana Man Shares a McDonald’s Table with a Stranger — Hopes to Have More Breakfasts Like This

Goldberg thought it would be an excellent idea to create a service that would match high-risk elderly individuals with people who can shop for them and deliver their groceries for them. The teen created a website for the company and the next day, began his idea. He decided to name the company “Zoomers to Boomers.” This stems from the Generation Z “employees” delivering food to the Baby Boomers.

He posted the website to his neighborhood NextDoor app to spread the word. Shortly, word spread like wildfire. Originally, Goldberg and his friends were doing 10-12 orders a day. Then, an article was published in the local paper and things changed forever.

Zoomers to Boomers Started Receiving Over 100 Order Requests per Day

After the press began to pick up their story, Goldberg realized he needed to really create a solid team for the business. He teamed up with many of his close friends who helped him from the beginning. There, the company later became a non-profit organization that has several bases and locations.

Currently, Zoomers to Boomers has over 20+ branches globally.

“Malibu was started because I was contacted directly by the mayor of Malibu, Karen Farrer. I received an email from her at about 10 P.M. one night early on, that she was concerned about her elderly citizens, as there was no system in place for them to get groceries, and asked for my help,” Goldberg told Forbes.

Goldberg’s Plans Stretch Beyond the Pandemic

The non-profit was running during a time of high need when things were shut down and many restrictions were. in place. However, Goldberg was not going to stop his business when things began to open up again.

Goldberg said that seeing the success of Zoomers to Boomers gave him a ton of ideas to bring the organization into the future, despite coronavirus becoming less of a major threat in many people’s lives.

The founder said he wanted Zoomers to Boomers to not only be a company that supports individuals with their basic needs, but also one that can help support their overall emotional well-being.

It’s safe to say that this is a game-changer!