Home Stories I Am The Greatest: Lessons From Muhammad Ali’s Success 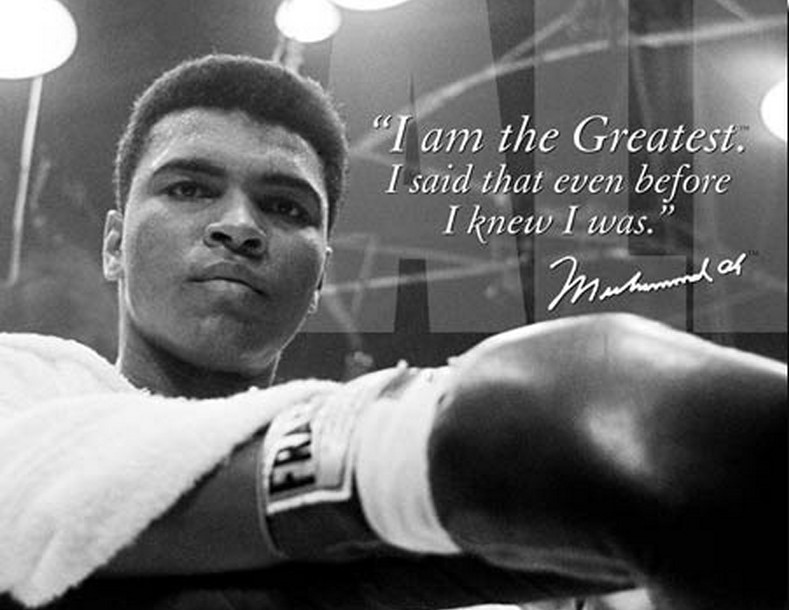 Usain Bolt’s speed, Michael Jordan’s jump or Muhammad Ali’s dominance. What makes these athletes rise above the fold and push the limits of human capacity to climb above others?

Most people would equate this success to the countless hours of training or an innate talent that these athletes were born with.

In studying the success of these legendary athletes, one characteristic came back for each one and according to them was the most important factor in their success. They all believed that they were the greatest even before reaching success. These athletes were able to make themselves and others think that they were already champions.

No athlete embodies this better than Ali. Generally considered the greatest boxer of all time. He won the gold medal at the 1960 Rome Olympics and later went on to win the world heavyweight championship three times. He kept repeating to himself and anybody that would listen: “I Am The Greatest.”

Ali was not the tallest boxer, nor was he as bulky as most other boxers of his time, his punches were not the strongest, but he was still the best fighter of his time. His agility was impressive, but what was most impressive was his confidence in himself.

In The Greatest: My Own Story, Ali says, “It’s the repetition of affirmations that leads to belief. And once that belief becomes a deep conviction, things begin to happen.” He believed without a doubt that he was the best fighter of all time, and he even pushed this belief upon his opponents. He kept repeating to himself and anybody that would listen that he was the greatest of all time.

This mentality allowed to take the punches and keep moving forward. In his earlier fights, his opponents were heavily favored, but he still managed to pull off the impossible.

To be a great champion you must believe you are the best. If you’re not, pretend you are. – Muhammad Ali

The power of his mind can be demonstrated in how he was able to beat the undefeated George Foreman in one of the biggest upsets in the history of boxing. He had previously lost against Ken Norton and Joe Frazier, and many thought that his career was coming to an end, but Ali knew that this was not the case. He believed he was destined to be the greatest boxer of all time. Ali trained even harder, and most importantly he created a mentality that would allow him to face any challenge.

During the fight, he took all the punches that Foreman threw at him. The match dragged to the 8th round where a tired Foreman fell to the ground and was not able to get back up on time. Muhammad Ali was then crowned world heavyweight champion for the third and final time. Looking back, Foreman said: “I’ll admit it. Muhammad outthought me and outfought me.”

In his excellent autobiography, the champ reveals a good deal about himself. He goes into detail about the strategy he devised to totally “psych out” champion Sonny Liston before their first fight. This book does a great job of going inside Ali’s mind. Reading the book feels like sitting with Ali alone and hearing him answer all the questions you ever wanted to ask him.

This example of perseverance in the face of impossible odds is a beautiful analogy to what happens in our lives. The way we perceive things is crucial. Life is often a mirror that reflects what we are and what we believe. The more we believe that we can do something the more we can push to achieve our goals. There are difficult and painful moments in everything we undertake, but if we remain relentless, our challenges become more acceptable. Leading us to push our limits and eventually reach our wildest dreams.