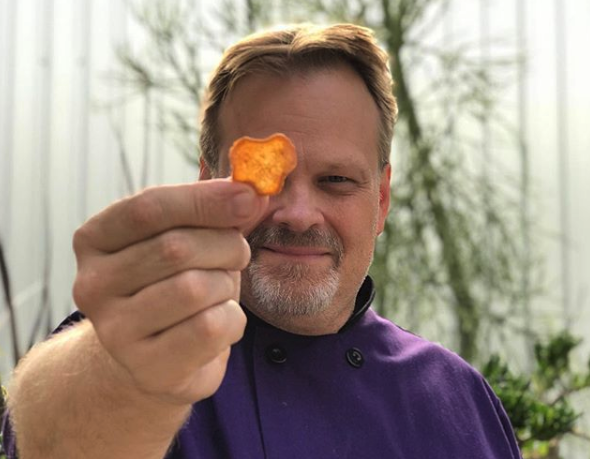 But after he and his children’s life was marred by tragedy, Chef Dave turned an unimaginable crisis into motivation.

He and his wife, Molly Benvenuti Anderson, had three beautiful kids and co-owned Madeleine Bistro together, the popular vegan restaurant in Los Angeles until 2011.

She was only 43-years-old. And now, Anderson was a single, grieving father to three kids.

“No matter what I was feeling, I knew it was way worse for them,” said Anderson. “It was my sole purpose in that moment to be there for them.”

Molly loved the holidays and always made sure to make them extra special for the kids. But now, the responsibility fell on Anderson and he just knew that no matter how much pain he was in, he had no other choice but to keep up the fun, celebratory traditions.

“I think it almost killed me, but I did it, and I really pushed myself to make each one of those holidays what they were because they had already lost enough.”

RELATED: Successful Kids Have Parents Who Do This One Thing

By putting his children’s needs before his own, Anderson was not only helping them in their healing process, but he was unknowingly jump starting his own.

Everyday was a struggle but he pushed through, and began questioning his life and purpose.

“If life is going to be this fragile, what do I want do I want my life to look like, and what can I do to get there,” he thought.

After some introspection, he knew he had to make a career change and that’s where ‘Outstanding Foods’ was born.

“For the first time in my life, I was actually directing my life.”

Anderson spent many years letting fear control his life, but now that he’s taken charge, there isn’t much that stands in his way.

With a new understanding of just how fragile life is, Anderson doesn’t take the old “don’t get to the end and have regrets” saying lightly. Today, he’s determined to live fully and without remorse.

“A few years ago, I knew that when I got to the end, there was going to be a boat load of regrets, and now the regrets are falling away.”