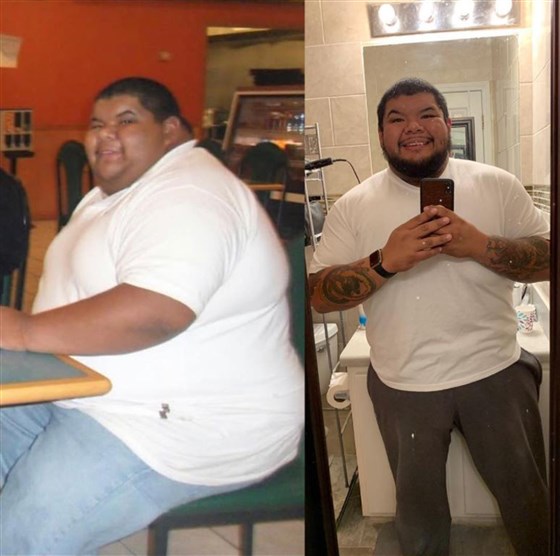 After his doctor told him he might not live to see his 21st birthday, Jose Rodriquez knew something had to change.

A football player in high school, weighing 240 pounds gave Rodriquez a clear advantage on the field. and while he was always heavier than his friends, he wasn’t too concerned and assumed he’d grow out of it.

Soon after graduation though, Rodriguez was involved in a motorcycle accident and his mental health took a hit.

At a low point emotionally, he turned to food for comfort and his eating habits spiralled out of control.

During a doctor’s appointment in 2014, Rodriquez, who was 20 years old at the time, was warned that his weight could have fatal consequences.

“He basically told me if I continued down this path I wouldn’t make it to 21 or 22,” said Rodriquez. “That was eye opening for me.”

While the news was frightening, it was the motivation he needed to transform his life.

Rodriquez knew that he had to set himself manageable goals, so he started small. He began walking more. First, he walked around his couch and then started walking around his house.

“At 505 pounds, I got so winded from doing simple things,” he remembered.

His consistency started to pay off after just one month of extra physical activity: he’d already lost 15 pounds.

A few months later, he began making small changes to his diet. “I was drinking four or five sodas a day … but it was diet,” Rodriguez said. “Also, I switched from whole milk to two percent milk.”

When his cousin suggested he join a gym, his brother and sister joined with him for extra support.

“They knew if I didn’t make a change I wouldn’t live long,” he said.

Making small adjustments to his lifestyle and seeing the positive results of his sustained efforts inspired him to keep going.

By slowly cutting out more unhealthy foods from his diet and becoming more active, Rodriquez lost 100 pounds in one year.

In 2017, his focus was to become stronger, so he started powerlifting.

“My weight loss, I would say, has been slow due to different goals that I set each year,” Rodriguez explained.

He’s lost a total of 200 pounds since the beginning of his transformation journey and his goal is to lose another 100 pounds this year.

“I re-analyzed everything I am doing,” he said. “When you have a goal like I do at the moment, any little change can make a difference.”

Rodriquez has now completely eliminated soda from his diet and focuses on eating lean proteins, vegetables and whole grains. He goes to the gym five days a week and enjoys taking daily walks.

His weight-loss journey has taught him a lot about himself.

“I have grown a lot. Back then, my mental willpower was on the low side and now it is at a whole different level,” said Rodriquez.

“I am a lot tougher than I thought.”