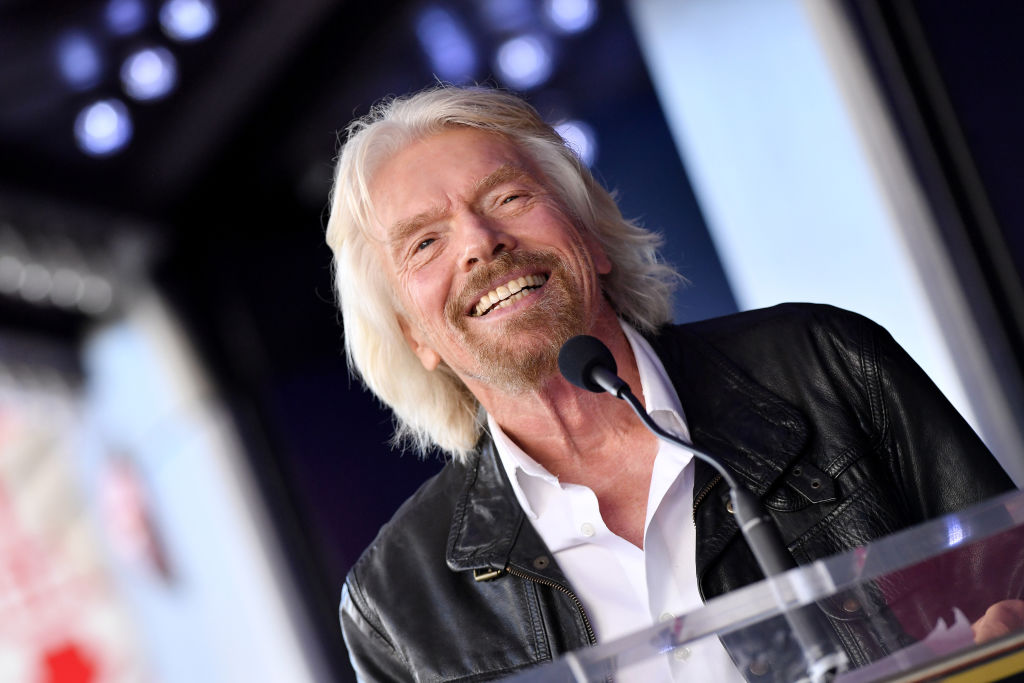 You know him as Richard Branson, the iconic leader behind Virgin Airlines but his technical title? Well, it’s a mouthful: Sir Richard Charles Nicholas Branson. Nope, he’s not a royal —  but pretty much as close as it gets.

As one of the most well-known business powerhouses who takes a revolutionary approach to everything he touches, he’s earned his recognition. Believe it or not, his conglomerate — The Virgin Group — owns more than 400 companies, with his latest venture attempting to bring space travel to the masses.

Branson’s been an entrepreneur all of his life, initially launching a magazine at the age of 16, and then a mail-order record business post-college. His career took off when he opened a chain of record stores called Virgin Records in the ’70s. By the ’80s, he developed his airline and eventually, his music label.

Buckingham Palace knighted the English-born Branson in the year 2000 for his “services to entrepreneurship,” and in 2007, he was named one of Time’s most influential people in the world. With a net worth of $4.1 billion — he’s among the richest self-made billionaires on the planet.

Here, a few of Richard Branson’s habits, rituals, and values he abides by, day-in and day-out:

In a blog for Virgin Airlines, Branson got nitty-gritty about his day. Though he definitely subscribes to some of the same regimes that the top leaders adopt, like getting up early and a structured day, he also lets his creativity flow freely.

When he’s not responding to emails or taking calls, he catches up on the news, which inevitably inspires him to write blogs: “I find myself speaking out more and more about the things I cannot accept — like the failed war on drugs, mistreatment of refugees, prejudice against the LGBT community, or the fact that the death penalty still exists despite being proven to not deter crime. But my blog is not always filled with calls to action. No two days are the same: one day I’ll be writing about conservation, the next I’ll sharing family photos from Necker Island, and then the following day I’ll be offering business tips to help young entrepreneurs find their stride.”

Even if you’re not leading a mega company — or a tiny one — getting your thoughts out helps you to understand your own mind. And it will lower your stress levels, improve your focus and give you power over worries or anxieties.

He takes notes for everything — on paper!

If you ever showed up to a meeting early in your career without a pen-and-paper in hand, you may have been sent back to your desk by a manager. Sure, most work has gone digital these days, but there is still something effective — and satisfying — about physically writing notes.

In fact, many leaders (including Sheryl Sandberg) are known for this ritual. Branson is one of ‘em.

“Regardless of where I am or what I’m doing – perhaps with the exception of kitesurfing or swimming – I always have a notebook on hand. My secret ‘life hack’ has also been to write it down! I can’t tell you where I’d be if I hadn’t had a pen on hand to write down my ideas as soon as they came to me,” he wrote.

He listens to everyone about everything.

In an interview Branson’s daughter Holly did with CNBC, she shared how her father is an expert listener. In fact, it’s something he taught her to value in her own career. He doesn’t just take notes from the wealthiest or the most successful — but literally anyone and everyone, even strangers.

“Listen as much as you speak, or listen more than you speak. There are a lot of great things my dad has found by listening to everyone,” she continued. “If he is sitting on Virgin Atlantic he will sit and chat with the customers and ask, ‘Do you have any advice for me? Do you have any tips? Is there anything you don’t like today? What can I change?’”

Branson’s desire to reap feedback is tied to his ultimate goal: make the planet — and its people — better, happier, and healthier.

As he wrote on Virgin’s blog: “I feel that fulfilment and purpose are very closely linked. Most people feel the most fulfilled and happiest when they are having a positive impact on those around them. Business should be a driving force in creating a better world, so if you can combine your entrepreneurial skills with a social purpose, you can have a great effect on the world.”

He focuses on living.

To build an empire, create products and tools that make life easier for millions, and to always be photographed with a big ‘ole smile on your face, you have to love life. And that’s exactly what Branson tries to focus on: living each day.

When you’re a billionaire, it definitely seems a bit easier to enjoy the ride, but more responsibilities add more pressure, and learning the fine juggling act of it all has proved instrumental for Branson’s psyche.

“I don’t really separate work and play — it’s all living. This doesn’t mean I’m always working, it means I’ve learned the art of balance,” he wrote. “It’s so important to carve a little time for yourself to breathe. I find the best way to do this is to make a cup of tea and take ten minutes to reflect. Often this time sparks new ideas as your mind wanders, or helps you find solutions to problems that have been bugging you. I find that taking a break helps me rest rather than give up. If you burn yourself out, you’re no good to anyone.”

He believes mistakes are a part of the game.

You may or may not remember 1994, but here’s a refresher on one of Virgin’s biggest failures: Virgin Cola. Doesn’t ring a bell? That’s because it was a major flop.

As Branson wrote on Virgin’s blog, they drove a tank through the streets of New York, smashing through a wall of Coca-Cola cans, making for some headlines. They thought they could drive sales far past Pepsi and Coke — but they bombed. In fact, he said it was one of the biggest mistakes in the company’s history.

Does Branson let it get him down? Nope, he takes it as a learning opportunity — and smashes forward. And he hopes to pave the way for others to do the same.

“Perhaps the biggest positive to come from Virgin Cola, however indirectly, was the launch of Innocent Drinks. Co-founder Richard Reed, a former employee at Virgin Cola, was inspired by his experience, and later started selling his own smoothies with a couple of friends. He now heads one of the biggest, most purposeful drinks brands in Britain. And it’s very satisfying to know that he got his start at one of our Virgin businesses,” he wrote.

When Shaq Overheard A Man Struggling To Purchase An Engagement Ring, He Did This