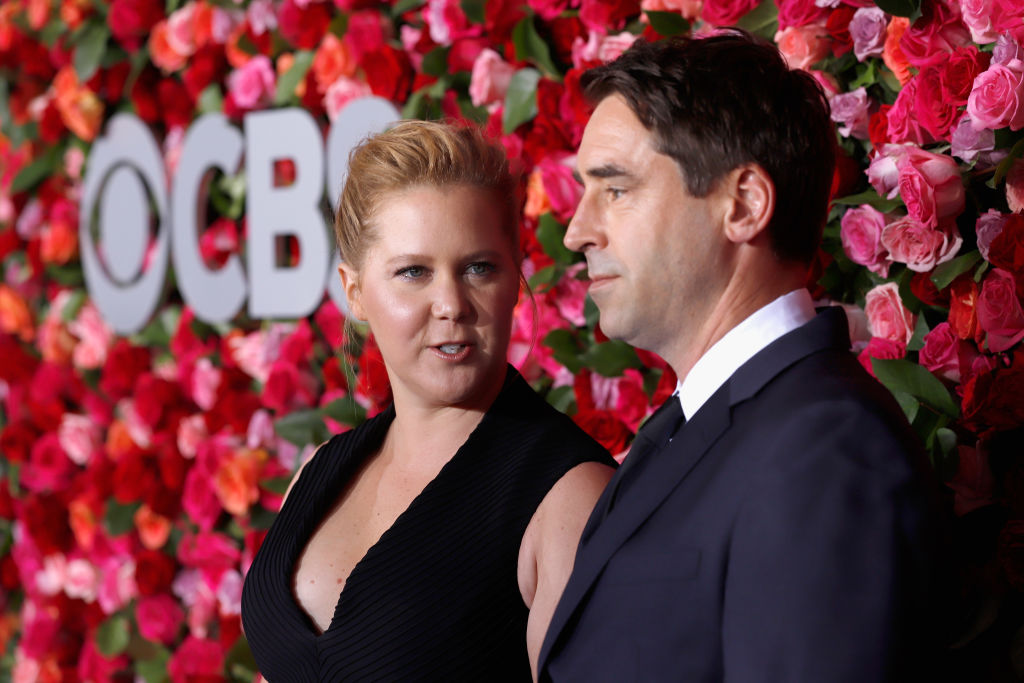 Whirlwind romances are nothing new in Hollywood, but Amy Schumer and Chris Fischer’s fast-paced love story was quite a shocker, even by A-list standards. The pair went from never having met to a chance encounter to walking down the aisle and starting a family in the blink of an eye.

It was 2017 and the actress was at her vacation home in Martha’s Vineyard where Fischer, an award-winning chef who grew up in the area and now works at the Beach Plum Inn, lives. Molly had the idea to invite her brother over to cook for Schumer, which he did. And so they met, but it wasn’t exactly love at first sight.

As the comedian revealed on the Howard Stern Show in April 2018, she did find her future husband good-looking, but she didn’t feel a spark right then and there. Instead, it took a couple more meetings for her feelings to bubble up to the surface.

It wasn’t until she enlisted Fischer’s help with planning a birthday bash for her friend and fellow comic Rachel Feinstein that she “got that feeling where all the blood goes to all the places. It just changed,” she told Stern.

Here what we can learn from Amy Schumer and Chris Fischer:

They didn’t seek outside validation

She may not have been drawn to Fischer immediately, but once Schumer did realize she was attracted to the celebrity chef, their romance took off at record speed.

Recalling the exact moment when Fischer made the first move, she told Howard Stern, “He came up behind me and he put his arms around me and he kissed my neck. And it was on and then we were just so open with each other.”

Going against social norms, the couple allowed their love to bloom at breakneck speed, never worrying about whether or not they might be moving too fast. Instead, they followed their hearts and, other than asking Molly if she was cool with them dating, didn’t seek out any outside validation.

In fact, they kept their romance totally under wraps until two days before their wedding.

When it came time to pop the question, just a few short months after they started dating, Fischer did so in a way that mirrored the rest of their fuss-free relationship: he just asked.

Schumer was sleeping, earplugs, and eye mask on, when her boyfriend woke her up, held out a ring and asked if she wanted him to get down on one knee. She didn’t — she was ready to say yes.

Not surprisingly, the wedding planning was equally quick and easy. In less than a week, the nuptials were planned and Schumer sent out a text on Sunday night that read, “I’m getting married on Tuesday. I hope you can come.”

On the same day, she made their relationship Instagram official, posting a snap of her kissing her beau at Ellen DeGeneres’ 60th birthday party. Then, on Tuesday, February 13, 2019, they said “I do” in a top secret ceremony in a rented house overlooking the ocean in Malibu.

She supports him unconditionally

Schumer took a detour from her usual comedy style in her 2019 Netflix special, titled Growing, when, rather than her standard X-rated jokes, she opened up about her husband’s autism spectrum disorder.

Aiming to educate and eradicate stigma, she revealed how, rather than raising concerns or making her uncertain, his autism just made her love him more.

She embraced his inability to lie (even if that means he openly hates on her outfits), was okay with his unique reactions to certain events (one time she fell and he “kind of froze and became a lighthouse, opening and closing his mouth”), and made sure to always lift him up.

“One of the signs of autism is you don’t make the appropriate facial expressions for the occasion you’re at,” she explained. So when it was time for their red carpet debut, she encouraged him to think of the ocean while posing for photos — it worked.

She echoed her sweet sentiments during an interview with Seth Meyers, explaining, “I don’t want to make it sound like, ‘I’m so nice that I married someone with autism.’ I fell in love with him, and I wouldn’t trade him in for anybody.”

They let each other be themselves

There’s no pretence here! If there’s one thing that’s clear about Schumer and Fischer’s successful relationship it’s that they let each other be themselves 100% of the time.

Schumer loves and embraces everything about her husband, including his autism spectrum disorder, and he’s okay with her openly teasing him in her signature style.

Schumer and Fischer’s idiosyncratic romance shows us that whatever makes us different is exactly what the right person will love about us. Embrace your partner’s whole self and they’ll do the same for you.