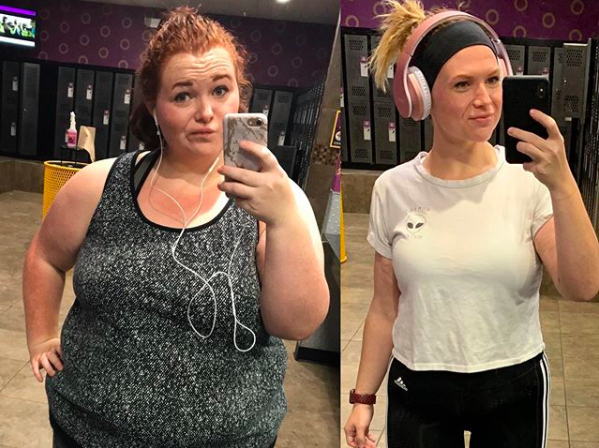 Starting in childhood, Kara Beck understood she was “different” from her peers.

“It was obvious I was bigger and it made me look older,” Beck told TODAY.

She was 8 years old when doctors diagnosed her with pre-diabetes, and 12 when she started getting bullied by schoolmates because of her weight.

Still today, Beck remembers hearing the whispers behind her back

Boys called her “fat” underneath their breath as they walked past her, and even one of her friends called her a “red cow” when she wasn’t around.

“I was very careful. I was always so sensitive and tried to stay out of situations that would provoke bullying,” said Beck. “There were more things said behind my back… than to my face.”

As she grew older, she developed unhealthy eating habits as a way to cope with the emotional scars left behind from all the bullying.

“The bullying was just damaging my psyche, at this point, and creating this really unhealthy self-image and relationship to my body,” she said. “That turned into my bad relationship with food.”

In high school, Beck lost 70 pounds, but started self-harming. Worried for their daughter, her parents helped her get treatment for anxiety and depression, and that included antidepressants.

Soon after, she regained the weight she’d lost.

“Bingeing habits really started when I got into my later teenage years,” Beck said. “Those bullying instances were fuel for that.”

She and her husband Nathan got married when she was 19 and they planned to have children, but only after she’d lost weight.

Things didn’t go according to plan — just as Beck started to lose some weight in 2016, she found out she was pregnant.

At the time, she weighed nearly 330 pounds

“Before my pregnancy, mentally, I had gotten very good at avoiding my weight,” she said.

“When I was pregnant I was visiting the doctor every month and then every week and I had to see it and address what was happening.”

That was when I thought ‘Oh my gosh I need help.’

After a doctor told her about gastric bypass surgery, she started following people on Instagram who’d gotten the procedure and eventually found the inspiration to take the leap herself.

She finally got the surgery in January 2018.

“Your body has changed and you have to adjust to that,” she said.

She’s had to learn about proper nutrition and build a new relationship with food. Her body no longer enjoys the same amounts of sugary and fatty foods it had gotten used to.

Her key to success

For Beck, more than anything, increasing her self-awareness has been key to her success.

“You have to analyze your thought patterns and feelings,” she explained.

Am I actually hungry?

Since getting the surgery, the 25-year-old admits that losing weight and staying healthy takes work and that it hasn’t always been easy.

But by making small, incremental changes to her eating and exercise habits, Beck has gone from 368 pounds down to 160.

When she first started exercising, she could only do 15 minutes at a time before she felt exhausted. Now, she goes to the gym for an hour, six days a week.

Kara’s lesson to us all

For Beck, being healthy means more than just physical wellbeing, it means dealing with her anxiety and depression too.

“I am working on the mental aspect and that will help me keep going further,” she said.

If you don’t deal with the mentality and the habits that got you there you won’t see results.

After having lost 200 pounds, she decided to have excess skin removal surgery on her stomach.

“The skin was a double-edged sword,” Beck said. “I saw it as a badge of honor but it also reminds me of who I used to be, which holds me back.”