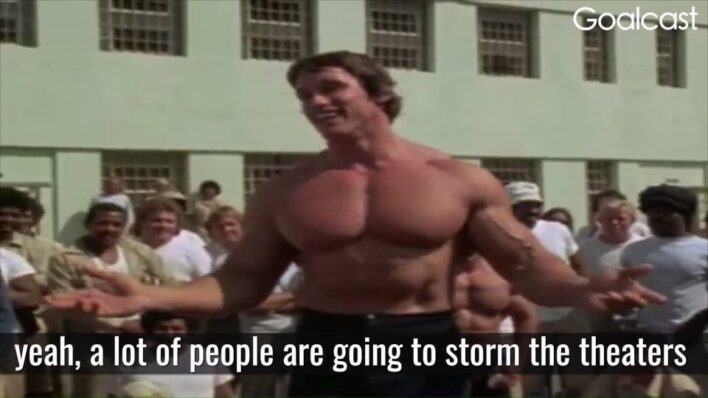 Arnold Schwarzenegger​ – Ignore The Naysayers Arnold Schwarzengger delivers a powerful acceptance speech about the importance of hard work and
By Goalcast    October 2, 2017

Arnold Schwarzengger delivers a powerful acceptance speech about the importance of hard work and to ignore the naysayers.

What is the secret to success? And I always say there’s two things, right off the top. One is, work your ass off, and number two, never listen to the nay-sayers, because I can tell you, there’s a lot of people out there that want to get into the movie business, or people that have been rejected in the movie business, but never take no for an answer. I’ve never listened to the nay-sayers. I remember when I was getting into body-building in Austin, that’s the only bodybuilding they said it would never happen, you would never make it, you would never be a champion, you can maybe be a soccer champion, or a ski champion, but not a bodybuilding champion, this is a British-American thing, you will never win.

Well, I didn’t listen to the nay-sayers, and I won the world championships 13 times in a row. So this is … and never listen to the nay-sayers. The same thing happened when I went into the movie business. I said I wanted to get into the movie business, I want to be a leading man. The first thing they immediately said was, “It would never happen. I mean look at your body, you’re over-developed, you way 250 pounds. This is the 70s, Arnold, you have to understand the little guys are in now, Dustin Hoffman, Al Pacino, Woody Allen, those are the sex symbols, not you as a monster, it would never happen. And plus, I mean let’s be honest, you with an accent, there’s never been anyone in America that has become a leading man with an accent, it would never happen.”

Well I didn’t listen to them, and I went on, and on and on. They also complained about my name, they said, “I can see, already, you with the name Schwartzen Schnitzel, whatever, up there on the billboard, yeah, a lot of people are going to storm the theaters that would be interesting in seeing you.” Well I didn’t listen to them, I went on and I was successful, and I made my way all the ways through, and I did the movies that I wanted to do. Had the career that I wanted to have, and everything, so this is just a lesson for all of you, never take no for an answer, that is the bottom line.