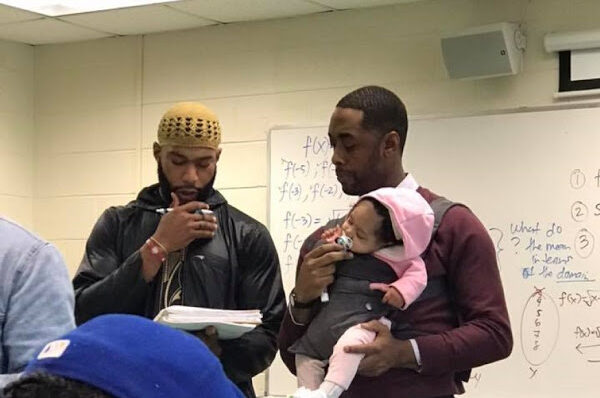 It’s often hard to juggle it all, from being a parent to working to also studying and staying on top
By Aly Walansky    March 12, 2019

It’s often hard to juggle it all, from being a parent to working to also studying and staying on top of other obligations and sometimes, one will get in the way of the other and everything seems to fall apart around you.

Take for example Morehouse College senior Wayne Hayer, who didn’t have childcare available to care for his baby and could have missed class because of it but instead decided to take the baby to class and mathematics professor Nathan Alexander was there to step in.

When Hayer was texting his wife about the childcare issue, the professor had an idea.  “Our goal is to instill leadership in our students,” he said in an interview with The Washington Post on Sunday. “I want to be a model of that, and I think Wayne is a model of that. He was focused on his academics in spite of everything else he had going on.”

The professor told his student without hesitation: “If that’s the issue, bring her to class.”

And one day, he took his professor up on the offer. Unable to find child care, Hayer thought, “Dr. Alexander did say: ‘Bring your kid to class, if need be,’ and I had to get to the lecture because we were taking a test soon.”

Hayer dressed Assata in a onesie, a pink sweater and a hat, and took her to college.

“I was apprehensive about it,” Hayer said during an interview with The Post. His mother told stories about bringing him as a baby to her own community college classes, but Morehouse is a historically black men’s college.

“I had a book bag on and a baby strapped to my chest. I looked crazy,” he said. As he approached the classroom door, Hayer felt intimidated. “Then Dr. Alexander saw me and welcomed me with open arms.”

Alexander  even offered to hold Assata so Hayer could take notes.

“There’s a negative stereotype about African American men not being fathers to their children and a myth that most black people come from single-parent households,” Hayer said.