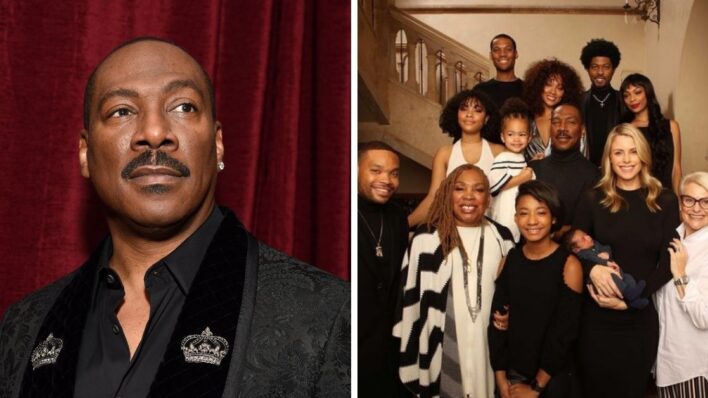 Eddie Murphy has 10 children from 5 different women. Yet, the reality of his family is different than expected.
By Maya Khamala    January 25, 2021

Eddie Murphy has 10 children from 5 different women. Yet, the reality of his family is different than expected.

Since Eddie Murphy burst onto the comedy scene in the 1980s, he’s been connected to numerous women and built a very large and loving family. Today, the comedy legend is in his 60s and has 10 children from 5 different baby mamas. Now that’s fodder for a quality stand-up routine.

While haters might assume that with stats like that, Eddie must be a less-than-stellar father and partner, his actions have consistently shown the opposite to be true. Whether it’s maintaining a positive relationship with the mothers of his children, or sharing his time as equally as possible with all 10 of his kids, Eddie Murphy sets the bar high for fatherhood.

Who Are Eddie Murphy’s Children?

Eddie Murphy’s children range in age from 2 to 31. In 2018, he made headlines — and created new standards in fatherhood — when he got all 10 of his children together in one place for their very first public photo together, just weeks after the birth of his youngest son with his fiancée Paige Butcher.

Just to help you keep it all straight, here’s a run-down: In 1989, Eddie and his then girlfriend Paulette McNeely welcomed his eldest child, Eric Murphy, into the world. He fathered his second son Christian Murphy with his then girlfriend, Tamara Hood, in 1990.

In 2016, Eddie had a daughter, Izzy, now 4, with his fiancée, model Paige Butcher, whom he has been dating since 2012. The pair also welcomed a son, Max Charles Murphy in 2018 who was named after Eddie’s late brother, Charlie Murphy. And that, my friends, makes 10. In addition to this beautiful blended family, Eddie is also a grandfather, as his son Miles Murphy recently became a father himself.

Eddie Murphy, Kids and the Spotlight

Eddie has made headlines in recent years on numerous occasions for his family-focused life. Most of his children have decided to stay away from the limelight and lead a relatively normal existence, and Eddie’s there for that—contrary to popular belief, he’s a pretty private person himself.

His daughter Bria, however, is an actress and the co-founder of an online gallery based in Los Angeles. Eddie attended her art show in 2016, saying, “I’m glad that people get to see how talented she is. We’ve known for years how talented she is. It’s exciting to see her stuff up on the walls… I’m having all of those proud parent feelings.” Although Eddie was initially less involved in Angel’s life (his daughter with Mel B), in 2010 it was reported that he was making a genuine effort to spend more time with her and welcome her into the fold.

Is Eddie Murphy a Neglectful Father?

While some people take one look at Eddie’s family situation and assume that since his children have multiple different mothers, he must have a complex and harrowing relationship with each one. But the truth is, Eddie Murphy loves each and every one of his children profoundly. He has made clear what his priorities are.

The misconceptions that many people have about Eddie Murphy based on his personal family life is understandable considering the irresponsible, absentee attitude that some fathers are so known for.

But Eddie Murphy takes pride in his role as a father, larger than average though his family may be. When Rolling Stone mentioned Eddie’s reclusive nature in 2011, the relatively discreet actor was open and honest about how he feels—about both his career and his children.“My whole sh-t revolves around having this peace of mind,” he said.

Everybody’s really cool with each other and it’s all love all the way around everybody gets along that’s a good thing. It’s a love fest at the house.

“It’s peaceful, quiet, that’s my day-to-day. I play my guitar, hang out with my girl. My kids went to their mom’s this week. I’m chilling, no stress. After all these years, I’ve done well and I’m cool. I feel comfortable in my skin, I’ve saved some paper, everybody’s healthy, my kids are beautiful and smart, doing different things, it’s all good. I’m trying to maintain my sh-t like this, and do a fun project every now and then.”

What Eddie Murphy Thinks of His Extra Large Family

While on The Ellen Degeneres Show in 2019, Eddie joked about the split reactions he gets when fans find out he has 10 children. “Men kind of look at me like, ‘He’s crazy. How much did that s— cost?’” he laughed. “And women, it’s kind of like, something sexy about it I think. ‘Eddie Murphy must be doing this thing. Eddie Murphy be getting it in.’” Jokes aside, he truly does love having a full house. “I like it, I’m happy with it,” he says.

More than once, Murphy has mentioned just how genuinely happy he is with his family situation. He had also mentioned to The Mirror, “I am so blessed with my kids. I don’t have one bad seed… My kids are so great, normal people – and nobody is like the Hollywood jerk kid. My kids are smart and are trying to do stuff.”

RELATED: How John Krasinski Channeled His Parenting Fears Into His Craft

In 2020, Eddie said that one of the things he liked most about his family was how much comedy material they provided. “The last time I did stand-up, I had no kids, I had never been married and I was 27 years old,” he said.

In 2016, Murphy jokingly told Entertainment Tonight, “My world revolves around [my children] — even the old, gray bald ones.”

Eddie Murphy Has a Positive Relationship With His Exes

While some might assume that with a track record like his, Eddie must have endless drama going on with his ex-girlfriends and ex-wives, and that is simply not the case. Instead, he maintains that everyone gets along incredibly well—even his baby mamas!

Even though Eddie, his fiancée, and all his exes have hardly opted into your traditional family scenario, they make it work. All the adults in question are mature adults, and together they maintain the integrity of a growing family with nothing but love and good intentions at its core.

While Eddie’s first baby mama Paulette McNeely has remained very private, there is no animosity between the pair. As for Nicole Mitchell, they called it quits after their brood of 5, but they still have a good relationship as friends.

Perhaps the most notable instance of drama between Eddie and one of his exes occurred with Mel B. While the pair had a passionate love affair spanning 6 months, when she got pregnant, Eddie questioned the child’s paternity and demanded a test (it was positive). The pair ended up in court, and all sorts of ugly things were said. Since then, however, he has made amends with mother and daughter alike, welcoming them into his great big fam jam.

Yet, if there is one thing that he is really proud of, it’s how his children turned out. You would think having 10 of them may have compromised their upbringing, but that is far from being the case.

“I really got lucky with my kids,” he says. “There really isn’t a bad one in the bunch, everyone turned out to be really good people.”

Maybe—just maybe—having a strong father figure helped with that a whole lot.