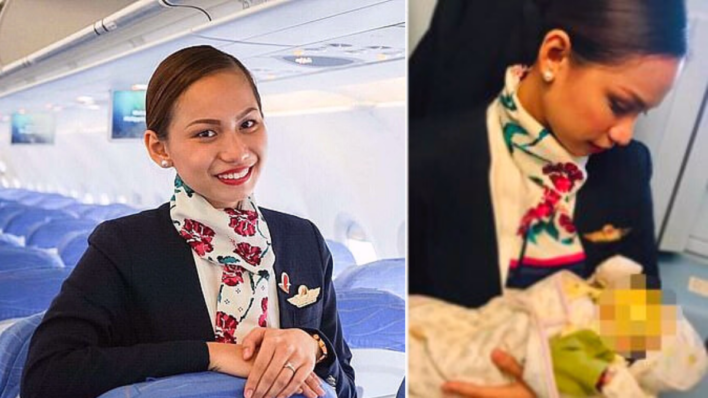 One woman instinctively knew that something very special would happen that day, but not in the way she expected.
By Lindsey Staub    December 6, 2021

One woman instinctively knew that something very special would happen that day, but not in the way she expected.

When Patrisha Organo boarded the Philippines Airlines flight, she had a strong feeling it would be one she remembered. Organo, a flight attendant, had the opportunity to qualify as a Cabin Crew Evaluator and get a promotion that morning. Though the flight did turn out to be a special one, it was not because of a promotion.

The flight was an early one, and not far into the journey, Organo heard a baby crying.

“Everything went smoothly until, after takeoff, I heard an infant’s cry, a cry that will make you want to do anything to help,” said Organo. “I approached the mother and asked if everything’s okay.”

The noise elicited some stares from fellow exhausted passengers. The cry was coming from a six-month-old girl, the daughter of one of the travelers.

“I tried to tell her to feed her hungry child. Teary-eyed, she told me that she ran out of formula milk. Passengers started looking and staring at the tiny, fragile crying infant.”

Organo knew what the child needed, but the plane did not carry any formula milk. There was only one way to feed the infant, so Organo stepped up.

I felt a pinch in my heart. I thought to myself, there’s only one thing I could offer and that’s my own milk. And so I offered.

Organo had her own nine-month-old daughter, meaning she was still able to breastfeed. Sheryl Villafor, the flight’s line administrator, led Organo and the baby’s mother to the plane’s galley so Organo could begin feeding the baby.

“I saw the relief in her mother’s eyes,” said Organo. “I continued to feed the baby until she fell asleep. I escorted her back to her seat and just before I left, the mother sincerely thanked me.”

I was right, the flight’s gonna be special, so special not only because I got qualified as an Evaluator but I got to help.

A picture snapped of Organo as she breastfed the baby went viral after Organo posted it on Facebook.

Stepping up to the plate

When seeing a child in need, Organo gave the only thing she could- her own breastmilk. By giving, she also received, in this case, the gratitude of a stranger and the gift of aiding a baby in need. We can always help someone who needs it, even if all we have to give is a piece of ourselves.