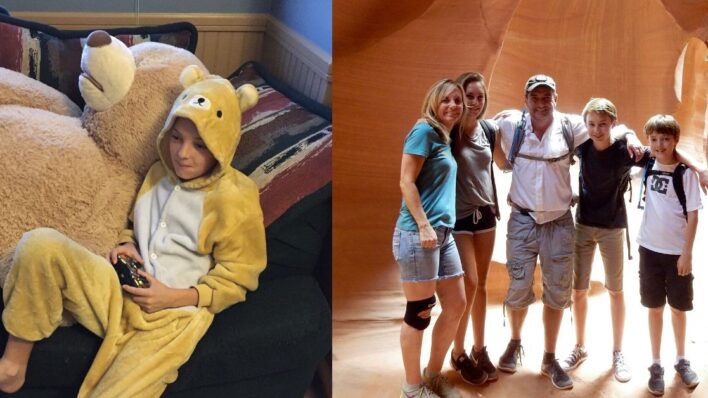 Jason Reid lost his son Ryan to suicide when the latter was only 14 years old. Ever since then, he has been leading the fight to end teen suicide.
By Aly Walansky    March 6, 2020

Jason Reid lost his son Ryan to suicide when the latter was only 14 years old. Ever since then, he has been leading the fight to end teen suicide.

Recent data released by the CDC has shared the sad reality that suicide is on the rise for young people in between the ages of 15 and 24.

But Jason Reid knows that all too well. His own son died by suicide in 2019, and he dealt with that tragedy in the only way he could imagine: by starting the foundation ChooseLife.org with a goal of ending teen suicide by 2030.

Jason is trying to make sure that no other family go through what he went through, and he is determined to reach every parent and every family about the conversation they need to be having with their kids.

The tragic story that fueled the movement

In March 2018, while he and his wife were away on vacation, his son died by suicide. Not only was it a devastating news for any parent to receive, it was also a moment of realization for Jason.

Up until then, Jason had thought he had done everything to make his kids happy. The realization that he had failed to see the signs of his son’s depression was a huge wake-up call.

As he reflected, Jason recalls a decision he regrets making, and that was getting his son a phone when he was only 12 years old.

“The reality of our story is that one of the things I deeply regret in life is getting Ryan a phone at the age of 12. We live an hour and a half from San Diego and the Mexican border, and I would never have said to Ryan, ‘Why don’t you go down to Tijuana, wander the streets on a Saturday night, and come back and tell me what you think.’ No parent would ever do that.”

As Jason explains, giving a child access to the Internet at such a young age was the equivalent of allowing them to roam a dangerous city alone.

But what I did do and say was, ‘Here is a phone with unfettered access to the internet — go anywhere you want, research whatever you want, and I won’t even ask you about it.’ And he used that phone to research how to kill himself.

Consequently, he created Kids Safe Mobile, a new app for kids’ mobile phones. “The app allows a parent to lock down the kid’s phone so they can only make a phone call, send a text, take a picture. And there’s an app that’s on the parent’s phone, so if [the kid ever tries] to shut down or delete the app, the parent gets an immediate notification.”

In the aftermath of Ryan’s death, as the family attempted to come to grips with the loss, Reid discovered two Post-it Notes his son had left where he knew they would be found: One read, “Here’s my username and passwords”; the other read, “Tell my story.”

So Jason decided that he will honor his son’s last words.

ChooseLife’s mission is a documentary Jason has been working on to bring awareness to the issue of teen suicide. The documentary takes a deeper look into the problem by featuring interviews with families, doctors, counsellors, experts and leaders.

The main aim is to help parents in taking ownership for their kids mental health the same way they do for their physical health as well as the importance of having conversations about depression and suicide with their children.

“We grew up with the idea that you can shake off depression if you try — we revert to how we were raised, and it takes a long time to change that kind of thought process. We’re starting to,” said Reid who said his original intention when creating ChooseLife was not this huge effort to end teen suicide.

I had no intention of doing any of this. I had intentions of doing a movie, and I knew a TED Talk would help me get some publicity for the movie. And that would be my contribution to this. I tell Ryan’s story, I’m done.

But as he started doing the movie, he  started having all these different conversations with everybody who is in the space, and he realized, “We’re not doing this the right way. We’re not tackling this like a problem that can be solved. We’re just saying, ‘Everybody should be aware.’

[Teen suicide] gets worse every year. Awareness is not helping. It’s simply not enough.

Awareness is not enough

Instead of simply making sure people know about teen suicide, Jason decided to take his mission further, into prevention. As a parent himself, he feels like he had failed by not recognizing the signs of his son’s depression. For him, that is the starting points and communication is primordial; it is the starting point.

“We need to ask the right questions, as parents. We need to have more vulnerable conversations with our kids. And we need to take ownership and responsibility,” Jason insists.

And it is just as easy

When your child is physically unwell, we all take ownership of that and make sure they get the help and support the need. So why don’t we have the same attitude when it comes to their mental health?

Parents have to have difficult conversations

Reid believes he is disrupting a space that doesn’t necessarily want to be disrupted. That is because he believes that raising awareness is simply not enough. That’s what people “are comfortable doing.”

His intention is to combat teen suicide, to bring it to an end and in the nonprofit world, things are moving too slow for his liking. That’s why he made sure his mission went beyond awareness.

I’m out there as a business guy saying, ‘Nope, we’re going to end it.’ We’ve created it, we can end it. But not unless we try. Raising awareness doesn’t end teen suicide — it doesn’t do anything. If you go into a group of parents and say, ‘How many of you are aware of teen suicide?” they all put up their hands.’

There is no lack of awareness. Rather, it is a lack of action on the parents’ part. That’s why Choose Life is targeting communication.

What Jason wants everyone to know

While Jason regrets getting his son a phone, he also regrets not having asked him the important questions.

Sometimes, the signs are not obvious but there is no denying that communication with your children would help you figure out whether something is wrong or not. Simply taking that step to sit down with them and ask about their day can do a great deal of good.

It’s all about learning to communicate and making sure those children are heard – and know they are heard, and that they have you to hear them, and talk to. There’s no telling how much difference that can make.