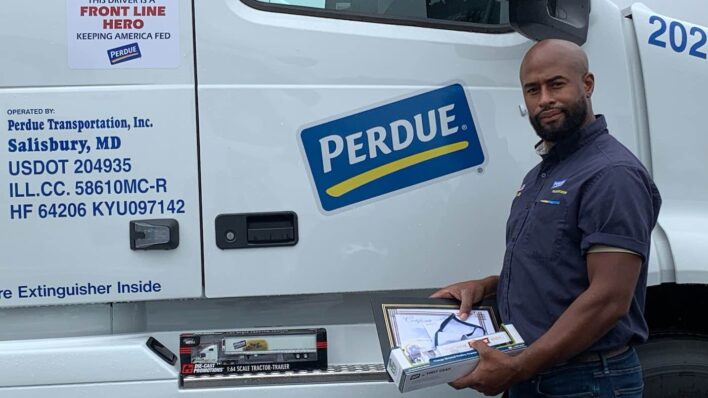 While most drive by the scene of an accident thankful they weren’t the ones at the wheel, one man threw
By Bryan Liquor    January 19, 2021

While most drive by the scene of an accident thankful they weren’t the ones at the wheel, one man threw himself onto the scene to save a life.

Joe Hylton was driving his big rig for Perdue farms when he noticed a horrible accident on Delaware’s route 1. Both cars involved were nearly totalled, while a man frantically ran down the highway in search of something.

Hylton immediately got out of his truck to direct traffic away from the wreckage. Closing in, he quickly understood that the frenzied man’s daughter had been flung from her carseat and he was racing to find her.

“When I saw the look on his face, I said, ‘Man, I have to do something.’ To look at the empty car seat, your heart just drops.”

Hylton — himself a father of three — took his flashlight and started searching the fields alongside the road.

Finally, he came across a small bundle, and braced himself for the worst. Unbelievably, the little girl was without a scratch. She “stuck her hands up for me to pick her up”, Hylton recalls.

The girl’s father was overcome with relief and emotion.

“I grabbed her and called for the dad, the dad came running over, and we had a hug. We didn’t know each other, I never met him before in my life. But I’ll tell you we knew each other in that moment.”

Father and daughter reunited, a humble Hylton returned to his truck and got back onto the open road.

Despite his humility, the heroic deed still caught the eye of Delaware State Police, who awarded Joe their Good Samaritan honor.

Not only does Hylton see his actions as simply the right thing to do, he saw it as the only thing to do.

“There is so much craziness going on in the world, I don’t believe in receiving accolades for helping someone out,” Hylton said. “That’s what we’re all supposed to do.”

If, like Joe, we see helping others less as a heroic task and more as a basic human instinct, we would all be closer and have more compassion for one another.

“Everyone is so angry and upset, it seems like the world is on a level ten right now. A little bit of good will go a long way. It gives me hope that things are on the mend, that things are changing.”