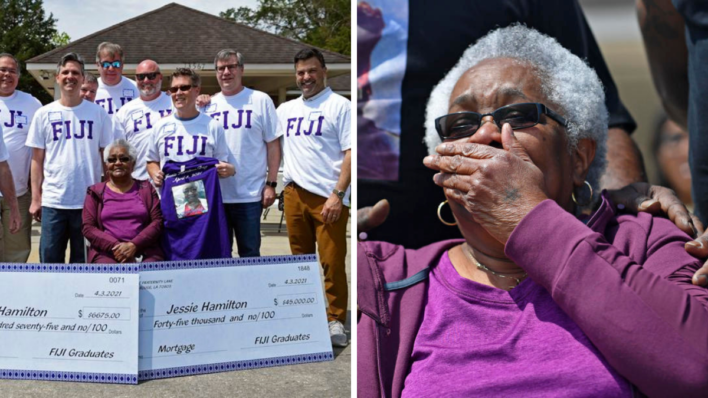 A frat house cook put her heart and soul into her job. Now three decades later, the frat gave her
By Joel Balsam    July 23, 2021

A frat house cook put her heart and soul into her job. Now three decades later, the frat gave her

A frat house cook put her heart and soul into her job. Now three decades later, the frat gave her an incredible gift as a thank you for all her efforts.

To the frat brothers at Phi Gamma Delta at Louisiana State University, Jessie Hamilton wasn’t just an amazing cook. She was also a listening ear for all their problems.

“Jessie is one of these people that shows up to work and always has a smile on her face, eager to please and never complains,” Andrew Fusaiotti, now 52, told The Advocate.

So, after learning that Hamilton had $45,000 left on her 30-year mortgage to pay, Fusaiotti and his fellow frat brothers thought they’d do something special for her 74th birthday.

Cleverly dubbed Jessie Hamilton Day, 91 frat brothers teamed up to pay off Hamilton’s mortgage, giving an average of $560 each for a total of $51,000. Aside from the $45,000 mortgage, they also handed her a check of nearly $7,000 to do whatever she likes.

“They were my kids. They still are,” Hamilton told The Washington Post. “They used to tell me they loved me, and now, they’ve proved it.”

The most giving person they’d ever met

During her time at the FIJI house from 1982 to 1996, Hamilton would start work at 4 am and serve the students breakfast, lunch and dinner. She’d also take them to doctor’s appointments, grocery stores and give them free therapy.

“I enjoyed doing it. They loved my cooking,” she told The Post. “I was always there to talk things through with them. They’d come in the kitchen and sit on top of the counter and tell me their problems.”

Three decades later, the frat decided to come together to pay her back for all her hard work.

“She is the type of person that inspires me, people that don’t have a lot, but give a lot. She’s the most giving person you’ve ever met.”

“This has been a blessing to me,” Hamilton told The Advocate. “I have been worrying about how I was going to pay my house off. I am grateful for what God has done and has led them to do for me.”

Hamilton now plans to retire in the comfort of her own home. She’s also planning a trip to Hawaii.

“My mom has always been a person who cares about other people. She would give you the shirt off her back and the socks and shoes off her feet,” Hamilton’s daughter, Yonetta Tircuit, told The Post. “Now she can actually slow down and take care of herself.“

Thanking those who cared for us

As we grow up, it’s easy to take for granted the people who cared for us, cooked for us and helped us on our way. Whether that’s our parents, a frat house cook or someone else, it’s never too late to show our appreciation.

We can’t give everyone we care about tens of thousands of dollars, but we can give them thanks, and that can be just as special.