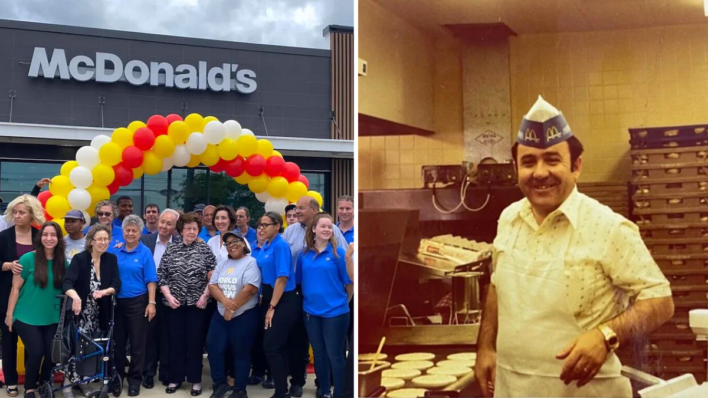 McDonald’s Employees Told to Stay at Home During Store Renovation – Then, Their Boss Does Something Surprising

Tony Philiou is the kind of boss everyone deserves.
By Amber Dowling    September 28, 2022

Tony Philiou is the kind of boss everyone deserves.

They say most people don’t quit a job, they quit their boss. Maybe that’s why McDonald’s owner Tony Philiou has such a low employee turnover rate: how he treats his employees is downright magical.

Why a McDonald’s Closed for Three Months

Philiou is well aware of the many challenges of being a service industry worker, especially post-pandemic. That’s why, when his restaurant closed for renovations last March, he decided to continue paying all 90 of his employees their regular wages for more than three months.

“How are these people going to make it without paychecks?” Philiou told The Washington Post about his conversation with himself at the time.

“There was nobody in the world who could change my mind on what I thought was the right thing to do,” he continued. “Whatever they were already earning, that’s what they got.”

The owner conceded it was a big investment, but one that was worth it. “They did not lose a penny,” he added. “If I had to do it again, I would definitely do the same thing.”

The History One Man Has With McDonald’s

According to the store’s general manager, Ed Kocsis, everyone was surprised by their boss’ decision to continue paying them for three months — time that would essentially be a vacation for them.

“Employees were floored, and they were extremely appreciative,” Kocsis told the publication. He admits he wasn’t shocked, though. He has been working at that McDonald’s since he was 15 and saving for college.

He continued working there all through summers and vacations, and when he graduated, Philiou hired him on as a supervisor. He’s been there ever since.

“Our turnover is very low compared with other quick-service restaurants,” Kocsis added. “I think it’s because they enjoy working here, and they’re treated with respect. They feel good working here, so they want to stay.”

Philiou wants to see his employees succeed because he was once a line worker. The man began working in McDonald’s in 1962 when he was paid 90 cents an hour to slice cheese.

The Ohio man slowly rose through the ranks, learning all the skills required to become a supervisor, manager, and franchise owner. “I had pride in what I was doing,” Philiou said.

Not that Philiou thought he would initially be at the burger joint for long, mind you. He was 30 years old when he started and already had a full-time job at an auto parts factory. He was also married with two young children, and his family needed extra income, so he took on a second job.

Sixty years later and Philiou has no intention of retiring anytime soon. Instead, he credits those who helped him climb the ladder all those years ago and hopes to do the same for the employees in his store.

“They saw something in me that I didn’t know I had,” Philiou said. “I saw an opportunity and that I belong in the service industry.”

How One Man Proved the Importance of Being a Good Boss

Seventy-eight-year-old Mary Conti is another lifelong employee who wasn’t shocked by Philiou’s generosity. The manager revealed to The Post that she was able to put some of her kids into college working for the owner and that over the years, he’s given her special perks — like a cruise — to reward her for her service.

“Tony has been very, very good to me and my family, and the whole crew,” she said. “Those bills were still coming in. He took care of us. He did everything that he could do to make our three months at home a personal vacation.”

When the McDonald’s reopened earlier this summer, it was with a ribbon-cutting ceremony and a big party. According to The Post, no one wanted to leave when it was over.

“Each one of my employees has a talent. They motivate me, and I motivate them.” Philiou said. “I come here every day, and I work side by side with them. I am beyond proud of my employees and the people in the community.”

At the end of the day, not everyone is lucky enough to have a job they love. But finding a boss that would go that extra mile for you? Well, that’s even rarer. Philiou just goes to show you that no matter what kind of job you have in life, if you give your workers the respect they deserve, then they will ultimately reciprocate.

If you’re a boss, Philiou is a great reminder to cut employees some slack when they need it, tell them when they’ve done a good job, and show them how you see them each and every day. And if you do have a golden boss like this one, maybe it’s time to finally invest in that “World’s Best Boss” mug. After all, not everyone is so lucky when it comes to who they work for.