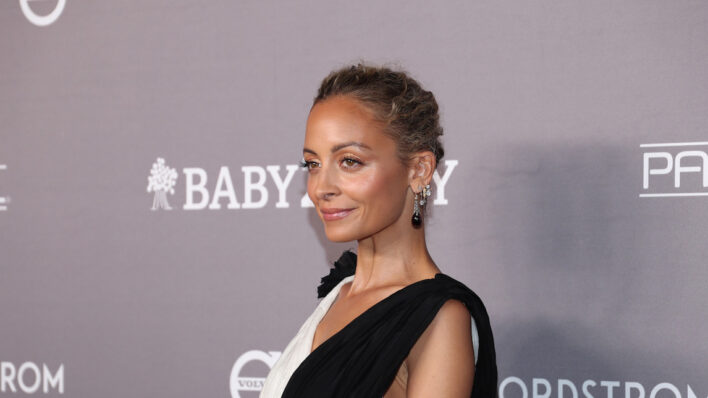 How Nicole Richie Overcame Her Resentment Towards Her Biological Parents

As anyone who’s been adopted knows, processing all the emotions around one set of parents—let alone two—is never simple. There’s
By Maya Khamala    December 9, 2020

As anyone who’s been adopted knows, processing all the emotions around one set of parents—let alone two—is never simple. There’s learning to trust the couple that adopts you, which is hard enough, but then there’s also that sinking feeling of having been abandoned or unwanted by one’s original set of parents. Not an easy feeling to shake.

Take Nicole Richie—everybody knows that her father is legendary singer Lionel Richie, but many people skip the small print and miss the fact that she was actually adopted. And it’s a unique story at that—in part because when the adoption was finalized, she was nine years old—old enough to make sense of the world.

For years, Richie, now 39, understandably felt heartbroken that her biological parents had left her and she wanted nothing to do with them. One might even surmise that her past drug problems and arrests have stemmed in part from this first relationship, which left much to be desired. But those of us who are open to evolving do, and so did Nicole Richie.

When she became pregnant with her first child in 2008, she circled back around to thinking about her biological parents (the circle of life, if you will) and decided she could make room for them in her life after all.

Nicole was born Nicole Camille Escovedo on September 21, 1981 to her biological mother, Karen Moss, and her father, Peter Michael Escovedo. Both of them worked in the music industry at the time and ran in the same circles as Lionel Richie. By the time Nicole was 2, her parents were reportedly having major relationship and money issues. Lionel saw Nicole for the first time at a Prince concert.

“There on the stage in the middle of the concert was this 2-year-old kid playing the tambourine,” he said. “So I went backstage and I knew the mother and I knew the father and, of course, they were having difficulties with their relationship. I said, ‘While you are having the difficulty, the kid is sitting out here in limbo so I’ll tell you what I’ll do, just put the kid in my house until the tour is over with and then we will sort this out later.’”

Who are Peter Michael Escovedo and Karen Moss?

Born on July 7, 1961, Peter Michael Escovedo comes from a musical family: he is the son of Latin percussionist Pete Escovedo and the brother of singer, drummer and Prince collaborator Sheila E.

A musician himself, Peter Michael Escovedo was a member of Lionel Richie’s band and they briefly toured together. It was around that time Escovedo met Karen Moss, Nicole’s biological mother, when she worked as a backstage assistant for Sheila E. Not long after, Nicole was born.

“The situation with you wasn’t getting any better,” Lionel Richie said to Nicole for Huffington Post. “It was actually getting worse, the family situation was falling apart.”

Knowing they couldn’t properly look after Nicole for financial reasons, Escovedo and Moss took up Lionel Richie’s generous offer and agreed to let her move in with him and his then-wife, Brenda Harvey when Nicole was three years old. After living with Richie and his wife for a few years, it became clear that Nicole’s birth parents couldn’t provide for her.

“It took about maybe a year for me to just fall in love and she was a little button, and of course by that time I was Dad and so I said, ‘OK, here is what we are going to do: you’re going to make everyone wish that they had adopted you,’” Lionel Richie said in an interview.

You are going to make everyone in your family wish they actually had a chance to get you back,’ and that’s when I said, ‘Let’s adopt her.’

So, Lionel and his wife at the time, Brenda Harvey, who were legal guardians up until that point, made the adoption official when Nicole was 9, and she’s been Nicole Richie ever since.

About being adopted, Nicole has said, “My parents were friends with Lionel. They trusted that they would be better able to provide for me.” The rest was history.

Although Lionel and Brenda got divorced in 1993, and Lionel remarried, Nicole remains close with both of her adopted parents. It was Nicole Richie’s birth parents, the ones she started out with (the ones who put her on stage at a Prince concert when she was a toddler) who never quite made it into her family picture.

Growing up without her biological parents wasn’t easy

In the beginning, it was a challenge for Lionel Richie to earn Nicole’s trust but he promised to never abandon her. Despite being at the peak of his solo career, the legendary singer was determined to create stability for Nicole, who inspired him to write his hit song “Ballerina Girl”.

“I remember you had abandonment issues for obvious reasons,” Lionel said about Nicole. “You’ve been handed around to every relative in the family. And remember what I said to you. I said, ‘I’m never, ever going to leave you.’”

Little Nicole doubted him but when she realized over time that Lionel would always return back home to her, after being gone for weeks and sometimes months at a time, she began to let her guard down.

In her 2014 memoir, Sheila E. wrote about the adoption from Karen Moss’ perspective. “As a single working mom, Karen was extremely grateful, but very torn. If Nikki stayed where she was, living rent-free, then Karen could earn enough for their future without disrupting her child’s life.”

Nicole Richie’s struggles with addiction and her Inspiring transformation

Karen Moss and Nicole weren’t on bad terms during Nicole’s adoption, and she remained in her daughter’s life in some capacity afterwards. She was also there (along with Richie’s adopted parents) when her daughter was arrested for heroin possession in 2003.

“I kind of took matters into my own hands and was creating drama in a very dangerous way. I think I was just bored, I had seen everything—especially when you’re young, you just want more,” Nicole said in a 2007 interview with Diane Sawyer.

After receiving treatment for substance abuse, meeting her future husband and finding out they were expecting their first child, Nicole Richie found it within her to take responsibility not only for herself and her actions, but for her unborn child.

Change is all about making a decision to change, and you have to start somewhere. So for me to say I’m a completely different person, I don’t know right now. But I’ve made the decision to not let myself go and I’m working toward that.

Although Nicole Richie has struggled very publicly in the past with substance abuse and eating disorders, today, she’s happy, healthy, and focused on her kids. While she might not have been born into the most stable of family situations, her now 13-year-old daughter, Harlow, her 11-year-old son, Sparrow, and husband, Good Charlotte frontman Joel Madden, keep her grounded and honest with herself.

When Nicole got pregnant for the first time in 2008, she has said that her pregnancy helped her bond with Karen Moss, her biological mother, while also bringing her closer to her adopted father, Lionel Richie.

Even though she hadn’t been at all close to her birth parents (especially her father), she realized during this period that she didn’t want to keep resenting them, and that, in fact, she wanted them in her life.

WHEN I FOUND OUT THAT I WAS PREGNANT, THERE WAS JUST SOMETHING INSIDE OF ME THAT FELT A RESPONSIBILITY TO MEND ANY ISSUES THAT I’VE HAD WITH MY PARENTS IN THE PAST, BECAUSE, LISTEN, I’VE PUT THEM THROUGH A LOT.

Nicole has also described how being pregnant helped her bond with her now husband Joel Madden’s mother. There was something about the prospect of bringing new life into the world that made Nicole Richie want to reach out to the previous generation—her birth parents included. By forging real, authentic bonds and making peace in this way, she was preparing herself to be the best mother she could be. That’s my take.

When she was pregnant with her daughter, Richie said, “I would really want to be someone my child would look up to.”

Nearly two decades ago, fans and haters alike might never have predicted that she would be a great mom, but today, she is just that: stable, loving, honest with her kids about her past, and welcoming of her birth parents into their lives. Sounds like positive progress to me. Knowing what it’s like to grow up in a celebrity family, as the daughter of Lionel Richie, Nicole made the conscious decision to keep her two children out of the spotlight. And today, she cherishes parenthood, proving that it’s never too late to turn your life around.