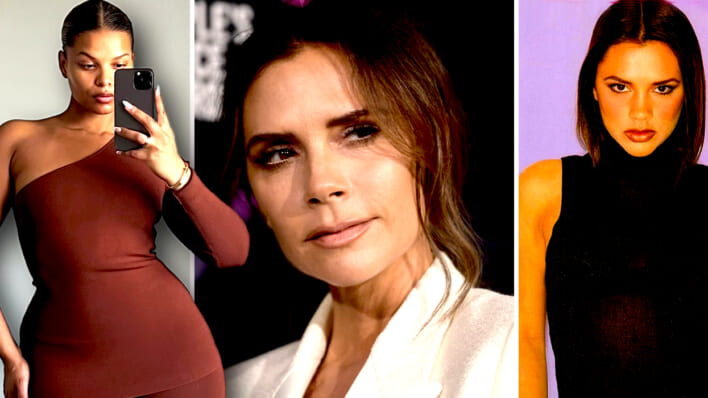 Victoria Beckham has traditionally been associated with a very particular body type. But fashion and the perception of personal health have changed, and Posh has changed with them.
By Jenna Pearl    June 14, 2022

Victoria Beckham has traditionally been associated with a very particular body type. But fashion and the perception of personal health have changed, and Posh has changed with them.

Victoria Beckham has been a trendsetter for decades. Since her career as Posh Spice in The Spice Girls, women around the world have looked to her as a bastion of style and good taste. Now, her brand is expanding to include women of all shapes and sizes.

Being herself petite, Beckham’s designs were made with thin women in mind, and the fashion designer received criticism for upholding a dangerous beauty ideal. As such, critics worried that she was upholding an antiquated — and often unrealistic — beauty standard. And now, Beckham herself seems to agree.

“I think women today want to look healthy, and curvy,” Beckham told Grazia in London. “They want to have some boobs – and a bum.”

In the past few years, Beckham, her husband David, and their four children have been spending more time in Miami. David is one of the owners of the Inter Miami football team, and Covid-19 restrictions have been looser in Florida than in the U.K. While in Miami, Beckham was inspired by the confidence with which the local women show off their curves.

“There are a lot of really curvy women in Miami, and they really own it, you know?’ Beckham said. “They walk along Miami beach with not a lot of clothes on, and they look fantastic. They show their bodies off with such confidence. I found both their attitude and their style really liberating. And as a mother, I loved that Harper was around women who were really celebrating their curves and enjoying how they look.”

Harper is Beckham’s ten-year-old daughter, and Beckham’s youngest child. No doubt the time the family spends in Miami will instill in her a sense of body positivity. As for her mother, the city has already inspired her designs.

Beckham is returning to her designing roots with a permanent capsule collection full of figure-hugging dresses and skirts. Unlike previous collections, this new line is designed with a curvy silhouette in mind. “Every woman wants a nice, round, curvy bottom, right?” Beckham said. “For that, you need a really tight knit that nips you in at the waist and holds you in all the right places.”

“It’s an old-fashioned attitude, wanting to be really thin,” Beckham said. When she rose to fame in the 1990’s, “Heroin Chic” was de rigueur — supermodels like Kate Moss epitomized this look, with lean limbs and sharp cheekbones. Girls and women in the Western world skipped meals and counted calories, while celebrities with any curve in their stomachs were called “fat.”

Then came the Kardashian era, during which the “slim thick” look became trendy: a nature-defying, endlessly Instagrammable combination of toned limbs, a tiny waist, and large breasts and bum. It’s no surprise that the Kardashians, who mainly inspired this trend, are known for their strict diets, rigorous workout routines, and use of cosmetic surgery to achieve their looks.

While there’s nothing wrong with being slim or having an hourglass figure, or even being full-figured, the pressure women have been under in the last hundred years to fit into strict bodily ideals has only increased with the rise of social media and the proliferation of plastic surgery.

RELATED: Victoria Beckham Reveals The Moment She Knew She Had To Leave The Spice Girls

Luckily, many celebrities and social media influencers are pushing back against the expectations placed on women to look any certain way — and the expectation to change their looks to suit the latest trends. And well-established public figures like Beckham are following suit.

“It’s not about being a certain size,” she said. “It’s about knowing who you are and being happy with who you are. I have found my own balance between wanting to have fun and being disciplined about eating healthily and working out. When you’re younger you fight against that balance, but through being older I’ve reached a place where I know what that balance looks like. I just know what works for me.”

Beckham’s new permanent capsule collection has been designed with inclusivity in mind. Sizes range from a UK 6 to an 18, and the colors in the collection’s palette are meant to flatter as many skin tones as possible. The most affordable pieces will retail at £90, putting them on the expensive side of accessible.

Beckham isn’t the first musician-turned-mogul to try and make an inclusive collection in the last few years. Arguably the most ambitious attempt at inclusivity came in 2017 when Rihanna launched Fenty. A high-end cosmetics label, Fenty now boasts over 50 foundation shades, with the express purpose of providing women of color (often overlooked groups in the cosmetics industry) with products that flatter their skin.