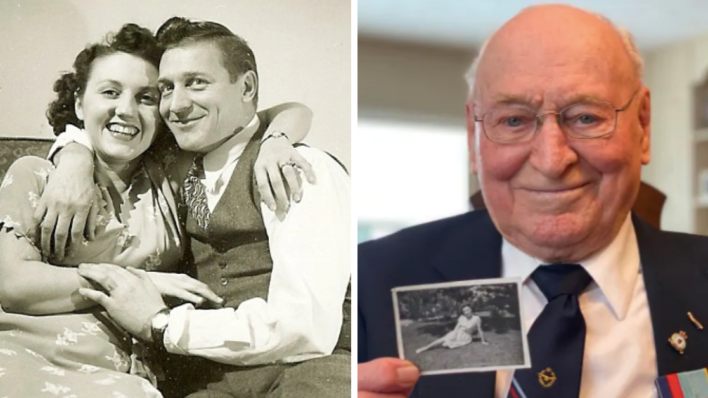 A 98-year-old World War II veteran shares his beautiful story of love and survival against all odds. Going to war
By Joel Balsam    February 19, 2021

A 98-year-old World War II veteran shares his beautiful story of love and survival against all odds.

Going to war and meeting his Buddy

Born in Saskatchewan, Canada, Reg “Crash” Harrison joined the war effort in 1941 and quickly made friends with Donaldson Rendal Holloway, known as “Buddy.” They were on the same boat together from Halifax to Europe and both became pilots.

“He really stood out. I always felt a little bit inferior to him. He was taller than me, a lot more good looking, but we got along really well,” Harrison told CBC.

Buddy would often send letters to his fiancée, Jean Woods, back home in Ottawa, and he invited Harrison to add a note at the end.

“You never know. Someday, you might meet her,” Buddy would say when showing Harrison a photo of Jean.

“All I remember is she was a good-looking gal.”

Harrison was completing his pilot training when he was in his first plane crash.

Shockingly, the crew he was with didn’t know there was a 500-pound bomb stuck in the plane’s bomb bay when they landed and it exploded.

“I was sort of temporarily knocked out, and when I came to, there would soon be a wall of fire and I picked myself up off the ground and started to run,” Harrison told CBC.

When he got back to the base he was told his friend Buddy died in a similar crash. Devastated, he wrote a letter to Jean expressing his condolences and promised to meet her in Ottawa if he survived the war.

They called him ‘Crash’ for a reason

On his 13th bombing mission, Harrison’s plane engine failed and he veered off the runway, crashing into a stone wall with bombs on board. He was ejected from the plane and managed to survive with a broken nose and needed 30 to 40 stitches in his face.

At that point, Harrisson got the nickname Crash, but he wasn’t finished crashing.

Harrison’s plane was caught in stormy weather and had to make a crash landing into a peat bog. Then, three months later, his plane received friendly fire and had to land with only one working wheel.

“My squadron commander said to me, ‘Well, Crash, you’ve cheated the Grim Reaper four times.… I’ve got a feeling that you’re not going to be lucky a fifth time.'”

“I never looked on myself as a hero; I just looked at myself as being darn lucky that my number wasn’t up.”

When Harrison arrived back in Canada, he called Jean and arranged to meet her in Ottawa. When they met, he loved her at first sight.

“I liked her as soon as I saw her,” Harrison said, beaming. “She was a beautiful, caring person.”

Harrison was hesitant to ask Jean to marry him because he “didn’t think that I could be the same type of a husband that Buddy would have been had he lived.”

But he eventually worked up the courage to ask Jean to marry him.

On Christmas 1946 she said yes, and the two stayed married for 43 years until Jean died of a heart attack in 1990. Throughout their marriage, Jean always kept two rings on her finger — one for Buddy, the other for Crash.

Harrison, who’s now 98 and living alone in Saskatoon, said he misses Jean and her “good cooking.”

“The best thing that happened to me in my life was to survive the war and marry Jean.”

Whether he was lucky or heroic, Harrison lived an incredible life and his experiences put in perspective how difficult life was mere decades ago. If he can survive four plane crashes to come home and meet the love of his life, surely we can make it through this pandemic together.