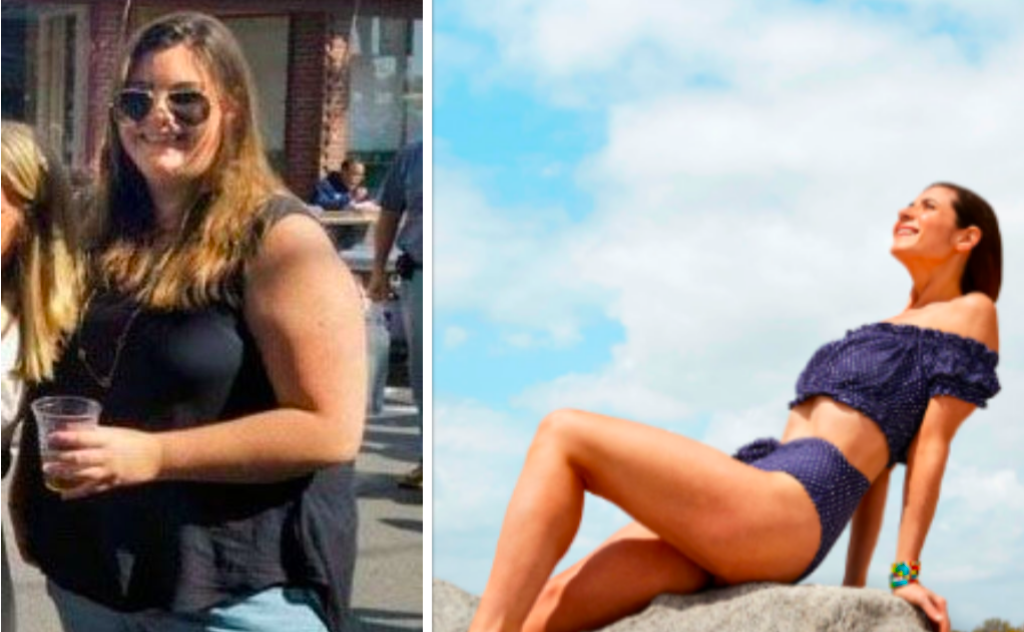 Kristen McLaughlin lost 133 pounds when the end of her 5-year-relationship gave her the “clean slate” she needed to jumpstart her weight loss journey.

She’d always been active as a kid and played sports throughout high school, but that all came to a halt when she met her college boyfriend and settled into a sedentary lifestyle.

“I wasn’t mindful at all about what I was eating,” McLaughlin, 31, told PEOPLE.“If I wanted to eat something, I didn’t really think twice about it. And when I got into my relationship, he was a larger guy, and I was eating whatever he’s eating — which does not make logical sense.”

The couple often ordered giant pizzas, cheeseburgers, and fries for dinner, whether it was to reward themselves or because they needed a pick-me-up.

“I would fall asleep with probably 12,000 calories in me, and then wake up and wonder, ‘Why am I so tired?’ ” she remembered.

Looking back, the New York City-based software specialist came to realize she was an emotional eater.

“It was easier for me to eat instead of tackling what was going on,” said McLaughlin. “It was easier to say, ‘I’ll feel better for 15 minutes while I’m eating a cheeseburger’ and not think about how bad I would feel afterwards.”

On top of that, she’d made a habit of skipping breakfast, or opt for a chocolate croissant, and then, come lunch time, would make up for the missed meal with a large taco bowl.

At her heaviest, McLaughlin weighed 270 pounds and felt self-conscious about the way she looked, so in 2016, she decided to try out Jenny Craig. Lucky for her, the nutrition program worked and she was able to lose about 60 pounds.

While she was proud of her achievement, she also felt bad watching her boyfriend, who was getting his MBA, “fend for himself” in the kitchen while she ate ready-made meals.

“I had some guilt about losing the weight while he had school going on, and I wanted us to spend more time together,” said McLaughlin. “So I lost a bunch of weight but then slid back.”

This was also around the time McLaughlin’s boyfriend started to become “distant”, often staying out after work. When she learned that he had feelings for someone else, she called it quits.

“At that point I’m like, ‘This is cheating, this is dumb, I can’t do this anymore,’ and I said I was leaving,” said McLaughlin.

Her heart was broken and suddenly, she needed to find a new apartment. Things were messy, but in retrospect, the breakup was the “best thing” that could happen to her.

“I literally got rid of every excuse that I’ve ever had,” McLaughlin said. “I never had a better opportunity to just focus on myself and build myself back up.”

Starting over with a clean slate, she went back to Jenny Craig in February 2017, and made it her goal to lose 100 pounds in a year.

She followed the meal plan and started taking evening walks home after work. As she began losing weight again, McLaughlin grew interested in weight training and fitness classes. Fast forward a year later: she had lost lost 100 pounds and celebrated her victory with a vacation to Cancun, Mexico.

Today, McLaughlin lost a total of 133 pounds and calls her weight loss life-changing.

“I think I’m more myself now, funnily enough, than I ever was the previous 30 years,” said McLaughlin.”I say yes to things now, I’m more outgoing, I’m more likely to be social. I think weight loss isn’t just physical or mental — it’s a whole spectrum of your life.”