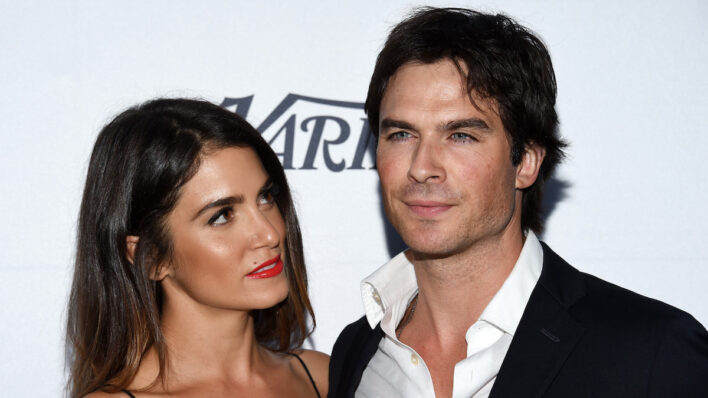 April 2021 marks Ian Somerhalder and Nikki Reed’s sixth wedding anniversary. The couple has enjoyed a drama-free union (they swear they never argue!) built on a shared passion for giving back and making the world a better place.

Taking to Instagram in 2019 to recall their very first date, Somerhalder shared how “five years ago today this amazing human being came over to my townhouse in Atlanta for tea. We’ve never been apart since,” he wrote. Calling their union “a magical journey,” he added, “Thank you [Nikki] for teaching me so much every day.”

It’s obvious that the actors have enjoyed a strong, loving union since saying “I do” in 2015 and it’s made all the more impressive by the fact that they only dated for six months before getting engaged.

Here’s what we can learn from Ian Somerhalder and Nikki Reed’s whirlwind romance:

A friendship can provide the ultimate foundation for love

Dating rumors began swirling around Ian Somerhalder and Nikki Reed back in July 2014 and by August 2014, the pair was pretty much official. The actors adopted a horse named Eagle that month and also moved in together after just a few weeks of dating. Jump to January 2015 and they got engaged.

It may sound like the ultimate whirlwind romance, but as a source told Us, Somerhalder and Reed felt confident jumping into marriage because they already had the ultimate foundation: friendship. “They were friends before, the groundwork had been laid,” the insider reasoned, saying, “It may seem quick, but they knew it was right. They believe in the same things. They are dedicated to their work and helping others.”

Not surprisingly, the Vampire Diaries star and Twilight actress didn’t waste any time walking down the aisle and exchanged vows in April 2015 at Topanga Canyon in California. Speaking with ET Canada soon after their wedding, Reed called Somerhalder “the most genuine man on the planet” and confirmed that it was a mix of friendship and a shared passion for giving back that helped their relationship evolve so quickly.

“We have a mutual friend who introduced us when I was very young and he just became my buddy,” she said, noting they’ve “been friends for like eight and a half or nine years now” and adding that having “such similar goals and passions” helped them connect. “I remember thinking, ‘Wow, I am so inspired by this human being,’” she recalled.

We were living parallel lives in a sense and now, being around this human being all the time and him being around me […] you feel sort of complete.

Ian Somerhalder and Nikki Reed bonded over helping others

Ian Somerhalder and Nikki Reed have more than acting and portraying vampires in common! While the actress has called helping animals her “passion” — “I’m so lucky that Ian and I are on the same page with animals,” she told People in 2015 — her beau has been working to “positively impact the planet and its creatures” through the Ian Somerhalder Foundation, which he started in 2010. As Reed told reporters in 2015, “What’s actually I think nurtured this long friendship that we’ve had is that we are passionate about similar things.”

We do wake up in the morning and talk about those things.

And it seems their devotion to animals may also have helped Somerhalder prep for fatherhood. Speaking with People in 2017 about fostering kittens, he said, “To get up in the middle of the night to bottle feed eight kittens that would die without you, it gives you a sense of what it’s like to care for something that depends on you for its survival.” Calling it “a great beginner’s course,” he joked.

I’ve learned to smile through cleaning endless amounts of poop and pee!

They put family (and themselves) first

The couple announced Nikki Reed’s pregnancy on Instagram in May 2017 with the Lost alum admitting they had kept the news secret for six months because “we wanted to keep it between the three of us for as long as possible so we could enjoy this time with each other and our little one who is growing so fast.”

It’s a sentiment they also indulged once the baby arrived. Daughter Bodhi Soleil Reed Somerhalder was born in August 2017 and, as Reed told Fit Pregnancy and Baby (via People), they had a unique plan that put their family first. “We’ll take the baby’s first month for ourselves,” she explained. “We’re doing one month of silence. Just the three of us, no visitors, and we’re turning off our phones too, so there’s no expectation for us to communicate. You don’t get those first 30 days back, and we want to be fully present,” she concluded.

Celebrating Reed’s first Mother’s Day in 2018, Somerhalder gushed over his wife on Instagram, writing, “I’m so profoundly grateful to you for the great sacrifice, patience, will and strength to grow, nurture and push this tiny little angel into the world. You inspire me every day to learn and alongside learning from you there is no doubt in my mind that we will be the parents we’ve always dreamed of being.”

Ian Somerhalder and Nikki Reed’s shared outlook on life also extends to their approach to relationships or, more specifically, the end of relationships. While Somerhalder previously dated Vampire Diaries costar Nina Dobrev (they called it quits in May 2013), Nikki Reed was married to American Idol alum Paul McDonald (they announced their divorce in March 2014) and both have remained friendly with their exes.

Reed reunited with McDonald in September 2014 so they could perform their song, “Honey,” on The Late Late Show with Craig Ferguson and the following month they attended a charity event together. She and Somerhalder have also been known to hang out with Nina Dobrev. In February 2017, Reed actually shared a snap of the trio and slammed critics, writing, “Here’s to putting an end to all those fake stories of on set jealousy, betrayal, made-up-friendships lost & women hating women.”

Meanwhile, when Dobrev was asked about the friendship on Watch What Happens Live in 2019, she said, “I don’t think that’s weird at all. I think that’s great. Why can’t everyone be friends? I think that they have a beautiful baby, and they are happy and so am I. And what’s bad about that?”

“Every day gets better” when they’re together

In addition to their solid friendship, numerous shared passions, and devotion to putting family first, Ian Somerhalder and Nikki Reed support each other in everything that they do and it’s helped their relationship succeed. As Reed told Us in April 2019, “We’re both really passionate people and we both have a lot going on all the time, so I think that being supportive of the other person’s dreams and aspirations and passions is important and it’s something that we practice.”

And they’re not shy about celebrating each other publicly. While Somerhalder has called his wife “the most amazing human in the world” and his “best friend,” Reed has dubbed her husband “my better half in every way” and gushed, “Navigating the waters of life with you is the greatest and most rewarding adventure I’ve ever known. We climb, we grow, and we laugh at all of it.” Somerhalder also told fans on Instagram how his wife inspires him, writing, “YOU have encouraged me and remained such a strong pillar of wisdom and power; I have such immense gratitude for YOU […] You are a maverick, a powerhouse and an inspiration.”

Despite breaking with convention and only dating for a few months before hitting the fast-track to marriage, Ian Somerhalder and Nikki Reed have enjoyed a successful union with no signs of faltering. As they’ve shown us, how long you date someone doesn’t predetermine marital success nor disaster. Rather, the success of a union relies on the foundation it’s being built on (in this case, years of friendship and shared passions) and the type of connection that exists between you and your partner — the more inspirational, the better!