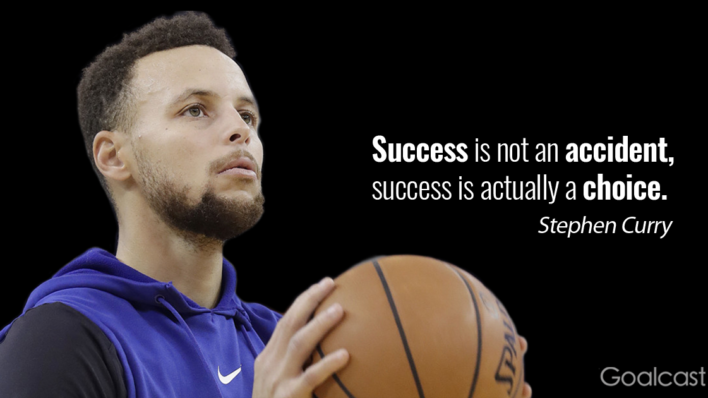 Representing the Golden State Warriors in NBA, Stephen Curry is an American professional basketball player renowned for his shooting accuracy.

The son of Dell Curry, one of the best 3-point shooters in NBA history, Stephen’s impressive skills were first noticed at national level when he led Davidson Wildcats to their first NCAA Tournament since 1969.

After he was selected by the Golden State Warriors, Curry became the leading three-pointer scorer and helped his team win 24 consecutive matches. On top of all this, in 2016 he was the first person to be named MVP by unanimous vote in NBA history, and one of the 11 players to win the MVP award in two consecutive seasons. His mother might be the one behind his success as she fines him 100$ every time he commits four turnovers.

Here are 15 Stephen Curry quotes to help you stay motivated: I’ve always believed that success for anyone is all about drive, dedication, and desire, but for me, it’s also been about confidence and faith. If you don’t fall how are you going to know what getting up is like?

I’ve never been afraid of big moments. I get butterflies… I get nervous and anxious, but I think those are all good signs that I’m ready for the moment. Success is not an accident, success is actually a choice.

I’m not the guy who’s afraid of failure. I like to take risks, take the big shot and all that.

To excel at the highest level – or any level, really – you need to believe in yourself.

I try to make it look easy, but the behind-the-scenes stuff is the challenge.

Be humble, and be grateful for all the blessings in your life.

Be the best version of yourself in anything that you do. You don’t have to live anybody else’s story.

Sometimes people make it seem like you have to have certain prerequisites or a crazy life story in order to be successful in this world. But the truth is you really don’t.

Every time I rise up, I have confidence that I’m going to make it.

Success is born out of faith, an undying passion, and a relentless drive.

The more years I go, the more experience I have, the more that nutrition and eating the right foods is important for recovery and things like that.

I always have an optimistic view, no matter what it is.