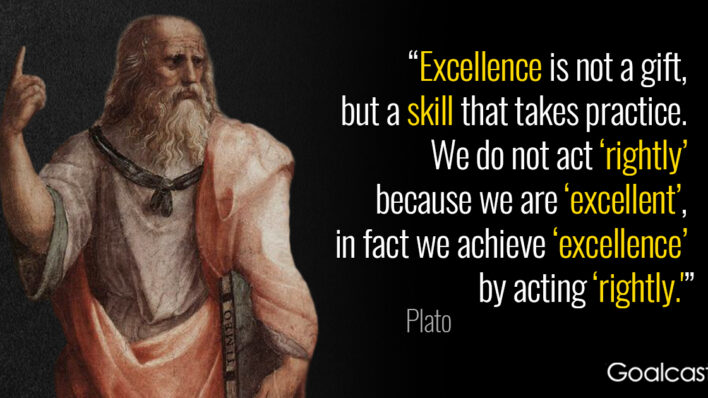 20 Plato Quotes to Freshen Up your Life Philosophy

Plato was a famous Greek philosopher and one of Socrates’ brightest students. Due to the fact that there are no
By Flavia Medrut    February 21, 2018 Plato was a famous Greek philosopher and one of Socrates’ brightest students. Due to the fact that there are no biographical accounts from his time, we have to rely on his writings and biographies written 500 years after his death to know more about him.

As a young man, Plato studied painting, wrote poems and wrestled, until he met Socrates. That’s when he became a philosopher and wanted to pursue a career in politics. He gave up on becoming a politician after Socrates was sentenced to death, and decided to travel and learn everything he could on philosophy, mathematics, science and religion.

RELATED: How the Ancient Greek Principle of Phronesis Helps Us Develop Practical Wisdom in Daily Life

After 12 years of traveling and gaining knowledge, Plato returned to Greece where he founded The Academy, the first organized school in Western civilization.

Plato’s teachings are a testament to the fact human behavior hasn’t changed much since 2,500 years ago. Here are 20 profound Plato quotes on life, love and human behavior. The greatest wealth is to live content with little.

Every heart sings a song, incomplete, until another heart whispers back. Those who wish to sing always find a song. At the touch of a lover, everyone becomes a poet. The price good men pay for indifference to public affairs is to be ruled by evil men.

Do not train a child to learn by force or harshness; but direct them to it by what amuses their minds, so that you may be better able to discover with accuracy the peculiar bent of the genius of each.

Never discourage anyone who continually makes progress, no matter how slow.

Good people do not need laws to tell them to act responsibly, while bad people will find a way around the laws.

If women are expected to do the same work as men, we must teach them the same things.

There is truth in wine and children.

Beauty lies in the eyes of the beholder.

Excellence is not a gift, but a skill that takes practice. We do not act ‘rightly’ because we are ‘excellent’, in fact we achieve ‘excellence’ by acting ‘rightly.’

People are like dirt. They can either nourish you and help you grow as a person or they can stunt your growth and make you wilt and die.

An empty vessel makes the loudest sound, so they that have the least wit are the greatest babblers.

Good actions give strength to ourselves and inspire good actions in others.

There is in every one of us, even those who seem to be most moderate, a type of desire that is terrible, wild, and lawless.

Love is born into every human being; it calls back the halves of our original nature together; it tries to make one out of two and heal the wound of human nature.

False words are not only evil in themselves, but they infect the soul with evil.

Everything that deceives may be said to enchant.