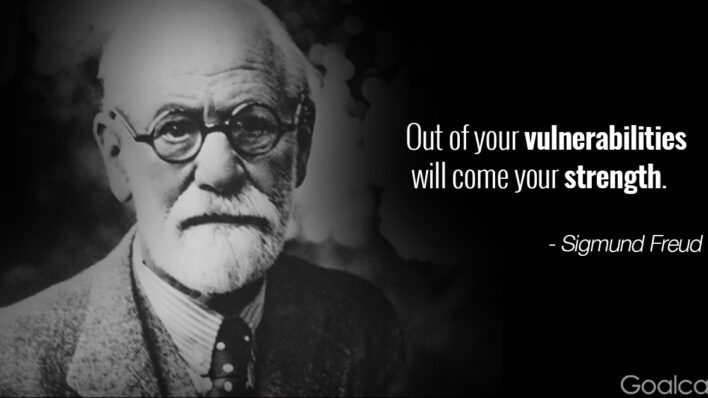 Sigmund Freud (6 May 1856 – 23 September 1939) was an Austrian neurologist and is widely known as being the founder of psychoanalysis. He dedicated his life to researching and writing groundbreaking papers about mental development and how our psychic works in various circumstances.

His work covers topics like the unconscious, religion, dreams, psychosexual development, life and death drives, femininity and female sexuality, melancholia, and theories on personality development. So buckle up because you have a lot to read about!

Freud points out some facts that most of us don’t really like to hear, but that doesn’t make them less real. What we actually know and are conscious about is merely the tip of the iceberg.

In 1938, he almost made it out of Vienna after the German Army entered the city and begun the Viennese Jews persecution. Sigmund managed to take some of his family members with him, but four of his sisters and his daughter, Anna, were left behind. Anna was arrested and interrogated and his sisters have died in the camps, either of starvation or in one of the gas chambers.

Tragedy made Freud strong and proud, above all. In his last hours, he reminded his doctor about their “contract”. The contract implied that he would not remain in lurch when the time arrived, so he left his daughter and doctor in charge of his end.

Written with wisdom and, sometimes, with a hint of irony, here are 20 Sigmund Freud quotes that will make you reconsider things, love life in its truthfulness, and build a stronger character.

One day, in retrospect, the years of struggle will strike you as the most beautiful. We are never so defenseless against suffering as when we love.

Unexpressed emotions will never die. They are buried alive and will come forth later in uglier ways. Out of your vulnerabilities will come your strength.

He that has eyes to see and ears to hear may convince himself that no mortal can keep a secret. If his lips are silent, he chatters with his fingertips; betrayal oozes out of him at every pore.

In the depths of my heart I can’t help being convinced that my dear fellow-men, with a few exceptions, are worthless.

It is impossible to escape the impression that people commonly use false standards of measurement — that they seek power, success and wealth for themselves and admire them in others, and that they underestimate what is of true value in life.

Immorality, no less than morality, has at all times found support in religion.

Whoever loves becomes humble. Those who love have , so to speak , pawned a part of their narcissism.

Everywhere I go I find a poet has been there before me.

Civilization began the first time an angry person cast a word instead of a rock.

The great question that has never been answered, and which I have not yet been able to answer, despite my thirty years of research into the feminine soul, is ‘What does a woman want?’

Dreams are often most profound when they seem the most crazy.
Children are completely egoistic; they feel their needs intensely and strive ruthlessly to satisfy them.

If youth knew; if age could.

Illusions commend themselves to us because they save us pain and allow us to enjoy pleasure instead. We must therefore accept it without complaint when they sometimes collide with a bit of reality against which they are dashed to pieces.

A civilization which leaves so large a number of its participants unsatisfied and drives them into revolt neither has nor deserves the prospect of a lasting existence.

A man who has been the indisputable favorite of his mother keeps for life the feeling of a conqueror.