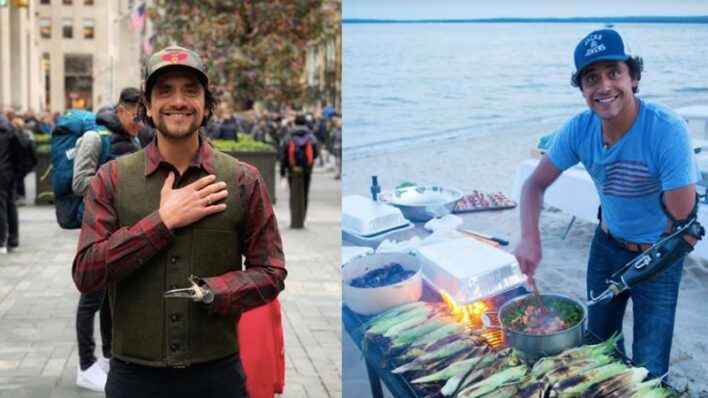 Culinary chef Eduardo Garcia lost his hand after being electrocuted in a hunting accident but he never lost his passion for cooking.
By Aly Walansky    January 3, 2020

Culinary chef Eduardo Garcia lost his hand after being electrocuted in a hunting accident but he never lost his passion for cooking.

Being a culinary chef is partly art and science. While success depends on the quality of ingredients, creativity and a great set of knives, a chef’s hands are also integral. They are crucial to every step of the process.

Chef Eduardo Garcia was well on his way to becoming a celebrity chef until a terrible accident in 2011 changed his life. While he was hiking, he saw what he believed to be  “dead bear cub in a large tin can.” He decided to investigate it by poking it with his hunting knife. He was instantly electrocuted.

“I remember the sensation of heat, I remember the ambient sounds of frequency being all-encompassing,” he told TODAY in an interview.

He survived but not without a terrible cost

Garcia was then brought to the University of Utah’s burn trauma center, where he went on to have a total of 18 surgeries in 48 days. But there was even more bad news: his left hand was badly infected and needed to be amputated.

At that point, a lot of people would have given up, or found a new career path. It’s easy to understand how a chef losing a hand could represent an unsurmountable obstacle. But Garcia got right back on his horse…or, to be more accurate, his chef’s block.

His perspective on cooking changed, but not his drive

Eduardo’s amputation was no insignificant barrier but his love for cooking was stronger. However, his journey back to his passion was not an easy one.

“I had a job to do, and my job was to be an active participant in my own recovery,” Garcia explained. “Relearning, it was everything … I’ve had to learn to say I don’t need to be a perfectionist in the kitchen.”

He had to shift his perspective on cooking from wanting to be perfect to simply enjoying the activity. This taught him to be less difficult on himself.

You’ve got a hook. How do you figure that out? And you’ve just got to step in, step up to the table, and just start participating, just say, ‘All right, one at a time,’ and it may be a failure or it may be a success — just step up.

He was back to cooking only 5 days after his surgeries

Eduardo did step up, and he’s back on top of his game. Five days after his treatments were over, he was already back to cooking for his friends. Now, he runs a food company called Montana Mex, which produces sauces, spices and oils.

He never lost sight of his passion, although he did require some adjustments. While he is known as the ‘bionic chef,’ due to the prosthetic arm he had to wear, Eduardo now prefers using his hook, as it makes cooking easier.

For him, it was a matter of staying true to his identity, as he explains: “Trying to pay attention and respect the recovery process, the emotional recovery process and also, professionally, just still be me, still be a chef and put myself into that. It’s been a funky balance, and I’m working to find that balance, still.”

No matter what the obstacle, there is always a way back

While the journey back to his passion and livelihood was not easy, Eduardo demonstrated that no matter what obstacles we face, we can always find the way back to what we love or envision for ourselves.

It may necessitate a change of perspective along the way but that is what enables us to adjust and prepare for future trials. By removing the pressure of perfection, we can simply take it step by step until we reach our goals.