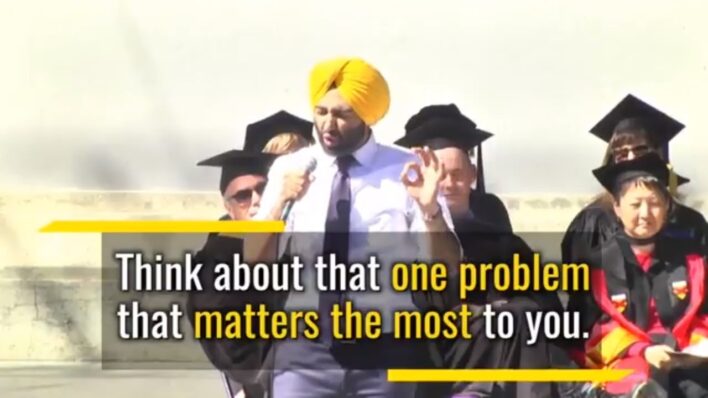 Angad Singh Padda | Be in the Business of Doing Good

In this powerful motivational speech, Angad Singh Padda shares how a remote Indian village, in the middle of nowhere, has the ability to solve all the world’s problems through generosity, real love, and doing more. “They say that dreams are not the ones that you have when you go to bed. Hell no! Dreams are the ones that don’t let you go to bed”

Think about that one problem that matters the most to you. That one issue you really need to resolve to make this world a better place, and open your eyes.

That right there, that right there is the core of my speech today. When I first came to the U.S, my only objective was to become successful, live the American Dream. So one day I could use that success to go back to my home state and fix the drug problem.

And so why am I talking about this, why? All of us, we all care about prosperity for everyone, to go beyond ourselves, to make this world a better place. We want to unify this world. That is who we are.

Many people are probably wondering, “that’s fine, but that’s also nonsense.” “That’s so impractical, because unifying the world has never been done before, what are you talking about?” There is no place in this world, some will say, where people have been unified like that. But what if I said that there was? What if I said that there was a place like that, where people are one?

There’s a village in India, I’m not kidding, called Shani Shingnapur, and in that village, not a single house has a door, and that’s because the villagers firmly believe that there is no need for borders or barriers or discrimination. They’re all one. And that is why, in that village, there has never been a theft, or a robbery, or a single incident of violence.

In the beginning of my speech today, every single person over here, from right there to right there, you all thought about that one problem that mattered the most to you, right? Now is the time to go out there and fix all of these problems. Every single one of them. And so, here’s my last sentence. My last sentence. Our legacy will be, we all not only did good business, no, no, no, we all engaged in the business of doing good.