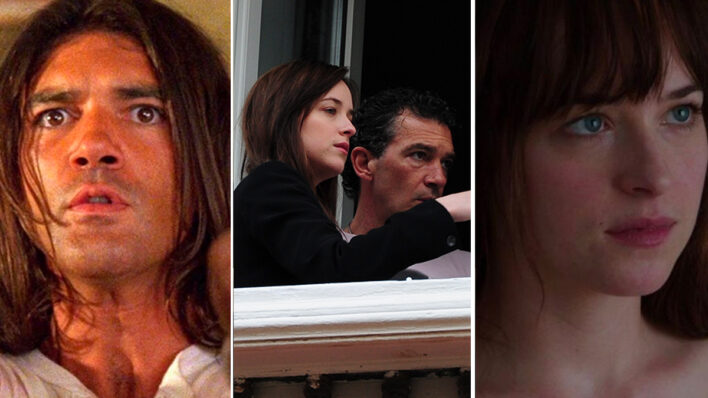 The Truth Behind Dakota Johnson and Antonio Banderas’ Heartwarming Relationship

Antonio Banderas is an incredible father figure to Dakota Johnson, despite Antonio’s marriage to Dakota’s mother having ended years ago.
By Shaoni Das    July 5, 2021

Antonio Banderas is an incredible father figure to Dakota Johnson, despite Antonio’s marriage to Dakota’s mother having ended years ago.

There’s something infinitely wholesome about a well-adjusted blended family.

The concept of the traditional nuclear family is perpetuated across the world as the ‘ideal,’ the one true outcome that every individual should aspire to in their life, whereas phenomena like divorce, step-families, and half-siblings have been touted as inherently wretched and unpleasant.

Divorce can be undoubtedly tricky and taxing for the parties involved, and of course, growing your family the unconventional way has its own share of risks and pains. But it’s critical to understand that it’s possible to develop strong ties with your step-family and love them as though they were related by birth.

Case in point: Antonio Banderas and Dakota Johnson. Here’s how they defy stereotypes through their unlikely but enduring rapport.

Antonio Banderas became acquainted with Dakota’s mother, Melanie Griffith, while shooting the film Too Much in the mid-nineties. It’s no secret that the Griffith-Johnson clan were a troublesome bunch, with alcoholism, drug addiction, and marital infidelities to boot. Dakota went on record to state how her childhood had been “unmoored and discombobulated” and that she didn’t really have an anchor growing up due to her volatile parentage.

Antonio had known about the landmine he was stepping on, but he’d fallen so hard for Melanie that he couldn’t help himself. They’d both been committed to other people at the time — Antonio to actress Ana Leza, and Melanie to actor Don Johnson — but realized over time that their attraction extended beyond infatuation. They married on 14 May 1996 and had their daughter Stella on 24 September 1996.

The Puss In Boots actor said that acclimating to step-fatherhood had been an uphill battle —Dakota and her brother Alexander were young, and he was “inexperienced” at parental responsibility. Yet, welcoming his daughter Stella immediately into his marriage empowered him to overcome his fears and embrace fatherhood in all its chaos and glory.

He said in an interview that once Dakota and Alexander figured out that Antonio would be a consistent fixture in their life, they let their guard down and started warming up to him. It helped that the children were craving normalcy and stability in their lives, and were growing increasingly tired of being shuffled back and forth between their parents. Antonio’s arrival proved to be a gift in disguise, as he offered a “solid ground in which they could grow” and blossom.

Suddenly I had a 6-year-old girl, a 10-year-old boy, and Stella came along almost immediately […] They needed solid ground in which they could grow. As soon as I realized that, I started establishing my relationship, giving them security, little by little doing the father thing.

While it’d been relatively painless to get in his stepchildren’s good graces, Antonio did struggle with navigating Melanie’s recurring substance abuse issues. She’d been in and out of her rehab throughout her marriage. Even though these stints inflicted a great deal of agony on Antonio, he persevered and put his mind to supporting Melanie through her recovery however he could. “She has overcome her problems beautifully,” adding that the entire family participated in her rehabilitation. “We did all the therapies together — the kids, everybody. It was a very unique experience, not only for Melanie. It was very rewarding at the end,” he said.

Dakota says Antonio changed all of their lives forever

While it’s unfortunate Antonio and Dakota aren’t technically related by marriage anymore, the love they demonstrate for each other continues to be unparalleled and boundless. As part of a deeply moving speech at the Hollywood Film Awards in 2009, she described how Antonio burst into their universe with “unbelievably bright light and a whole new world of creativity and culture.”

The Fifty Shades of Grey actress reiterated that Antonio loved the family with so much passion and purpose that it transformed their world inside out. She credits him for teaching her everything about “true passion and discipline,” and is glad to count him as a fierce and loyal companion to this date.

He loved my mother and my siblings and I so fiercely, and so big and so loud that it would change all of our lives forever.

Antonio, similarly, couldn’t be more ecstatic over the connection he shares with his former stepdaughter. He’s been an ardent follower of her career and told Vulture he’s “proud of her” every time he comes across a billboard or promotional material featuring her.

What’s most astounding about their relationship is that Antonio is no longer married to Melanie, so it certainly wouldn’t be the end of the world if Dakota decided to sever ties and go her separate way. However, Antonio Banderas is keen on maintaining amicable relations with his ex-wife and her family. The couple announced their decision to divorce in a public statement in June 2014, adding that they’re hoping to undergo this process in a “loving and friendly manner.”

They indeed stayed true to their word since Antonio told PEOPLE that he still considers Melanie his “best friend,” saying that he’ll love her till the day he dies. Likewise, Dakota and Alexander are still “family” to him, and he couldn’t be more grateful to have played a paternal role in their lives through their most impressionable years.

His unyielding appreciation and gratitude for his step-family exemplify what it’s like to find hope in the face of hardship. That’s not to say Dakota and her brother’s childhood had been miserable up to that point and that Antonio served as a miraculous guardian angel to cure them of their suffering. Of course, both of them love and adore their biological fathers, but it’s still safe to say that Antonio’s presence emboldened them to pursue magical new experiences and flourish in a way they hadn’t before.

I was there because I love their mother and I am totally taken with their mother and they were the most important part of what she came with. Very soon they understood that. They called me Paponio, a mixture between Papa and Antonio.

The idea of ‘blended’ or chosen families isn’t a concept exclusive to the entertainment industry. As time passes and people feel more inspired to restore control over their lives, you’ll likely find yourself as part of such an arrangement, where you’ll have to put aside your ego and assumptions to get along with a new, perhaps unexpected, family member.

Instead of turning away from such experiences — as awkward as they are — it might be beneficial for you to open your heart and begin getting to know the individual in question. Sometimes you’ll get along, sometimes you won’t, but the key is to understand that there’s always more space to let people in, to add more love into the mix. If Antonio hadn’t done the heavy lifting as a young father-of-three, he wouldn’t have been able to reap the rewards in his late fifties.