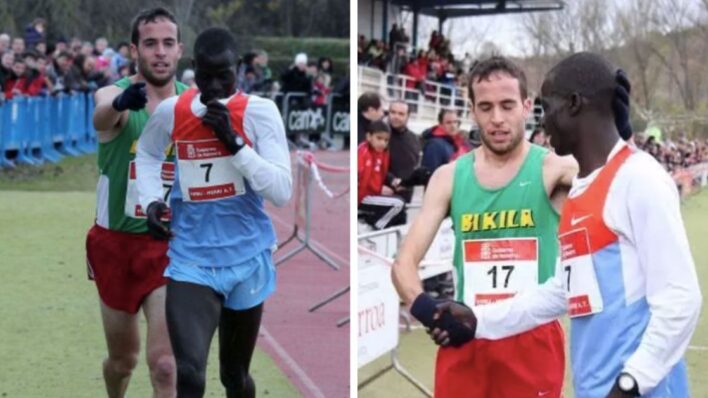 When athlete Iván Fernández Anaya realized his rival ahead had made a mistake, he decided to help him win rather than snag the first place.
By Kawter    August 3, 2020

When athlete Iván Fernández Anaya realized his rival ahead had made a mistake, he decided to help him win rather than snag the first place.

Many times, competitive sports can feel really, well, competitive. But seriously, athletes go through immense pressure both in their training and during performance, all to strive for that number one spot.

For one Spanish athlete, Iván Fernández Anaya, it was exactly that respect for the amount of hard work and dedication to the profession that made him lose–on purpose.

His adversary was well ahead

During a cross-country race in Burlada, Navarre, the Kenyan athlete Abel Mutai was well ahead of Iván. But then, thinking he had already reached the finish line, he started slowing down in his pace. He still had 10 meters ahead of him.

Anyone else in second position might have taken advantage of that mistake and snagged the first place but not Iván. Rather, he stayed behind Abel, and using hand signals, he guided him to the finish line.

It was a matter of honouring the man and effort

Later, Iván spoke about his decision, which may come as a shock to many people. However, to him, there was no question about who deserved the win.

I didn’t deserve to win it. I did what I had to do. He was the rightful winner. He created a gap that I couldn’t have closed if he hadn’t made a mistake. As soon as I saw he was stopping, I knew I wasn’t going to pass him.

Even his coach said he wouldn’t have done it

Iván’s coach, former Spanish distance runner Martín Fiz, said he would not have thought to do the same thing.

In the world of sports, Fiz said, “Winning always makes you more of an athlete. You have to go out to win.” But clearly, Iván cared about more than just winning. Indeed, even though the Burlada race was not significant and had nothing at stake for him as an athlete, he said he would have done it even if that were not the case.

But even if they had told me that winning would have earned me a place in the Spanish team for the European championships, I wouldn’t have done it either.

A final message of integrity and solidarity

For Iván, his selfless gesture was not limited to the track. He hoped it would spread a larger message about the importance of honesty.

“But I also think that I have earned more of a name having done what I did than if I had won,” he added. “And that is very important, because today, with the way things are in all circles, in soccer, in society, in politics, where it seems anything goes, a gesture of honesty goes down well.”

We can all learn from Iván’s inspiring and powerful gesture. Remember, when you prioritize honesty in your intentions and actions, you set out examples and standards for everyone around you. That’s how change happens!