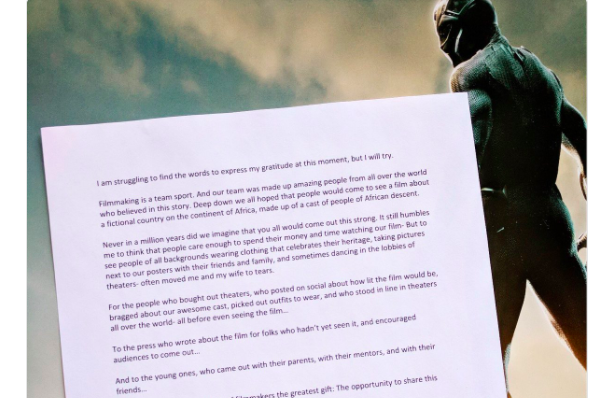 ‘Black Panther’ Director Shares Heartfelt Letter on Twitter, Gives Us All a Lesson in Positive Leadership

Unless you’ve been living under a rock, you’ve probably seen or are planning to see Black Panther, Marvel’s much talked about
By Anouare Abdou    February 21, 2018

Unless you’ve been living under a rock, you’ve probably seen or are planning to see Black Panther, Marvel’s much talked about recent release. The film is crushing box office records, earning $427 million worldwide and dethroning other Marvel titles in the process.

The superhero movie has also been praised for challenging racist narratives in Hollywood, and continuing conversations about what it means to be black in today’s America.

After a record-shattering opening weekend, Black Panther director Ryan Coogler took to Twitter to express his gratitude, demonstrating the power of effective leadership in the process:

Here’s the transcript of the heartfelt letter he posted:

I’m struggling to find the words to express my gratitude at this moment, but I will try.

Filmmaking is a team sport. And our team was made up [of] amazing people from all over the world who believed in this story. Deep down we all hoped that people would come to see a film about a fictional country on the continent of Africa, made up of a cast of people of African descent.

Never in a million years did we imagine that you would all come out this strong. It still humbles me to think that people care enough to spend their money and time watching our film — but to see people of all backgrounds wearing clothing that celebrates their heritage, taking pictures next to our posters with their friends and family, and sometimes dancing in the lobby of theaters — often moved me and my wife to tears.

For the people who bought out theaters, who posted on social about how lit the film would be, bragged about our awesome cast, picked out outfits to wear, and who stood in line in theaters all over the world — all before seeing even seen the film…

To the press who wrote about the film for folks who hadn’t yet seen it, and encouraged audiences to come out…

And to the young ones, who came out with their parents, with their mentors, and with their friends…

Thank you for giving our team of filmmakers the greatest gift: The opportunity to share this film, that we poured our hearts and souls into, with you.

Even though it’s not unusual for a film director to thank their team, writing a thoughtful letter and sharing it with the world wasn’t necessary. Coogler went out of his way to show extra love to all the people who worked hard behind the scenes.

This is a great lesson in positive leadership, as making team members feel valued is crucial to building a good group dynamic and, ultimately, good results.

A great leader is aware of the fact that he represents his team, and that he will most likely be getting a lot of credit for wins than some of his teammates who work just as hard without the same level of public recognition.

By taking the time to share the credit for Black Panther’s success, Coogler is reminding us all to stay humble, be grateful, and always appreciate the people who make our personal success story possible.