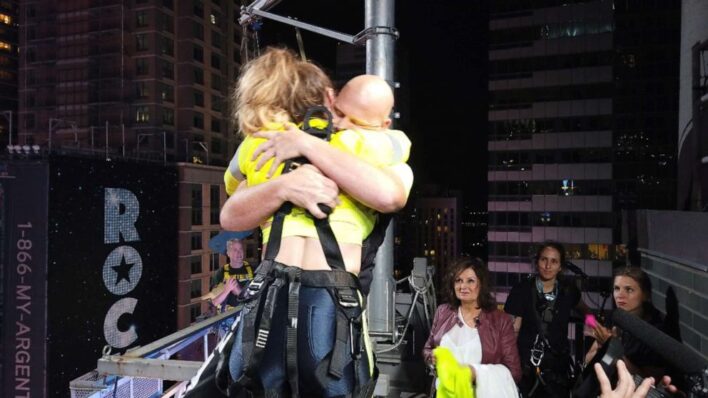 This past weekend, the Flying Wallendas defied death and shocked the world on live television, succeeding in being the first high

This past weekend, the Flying Wallendas defied death and shocked the world on live television, succeeding in being the first high

This past weekend, the Flying Wallendas defied death and shocked the world on live television, succeeding in being the first high wire team to cross New York’s Times Square on a tightrope 25 stories above the city streets.

They did it as a team, on live TV — that’s pretty exciting in its own right (and terrifying) but even more so based on what this team went through to get to this moment.

“This has been my life, longer than I’ve been alive,” Nik said at one point during the wire walk, overheard by millions on the live ABC broadcast. The Wallendas come from a long line of stunt performers who have performed iconic high-wire tricks throughout the years, and Nik was aware of his family’s legacy as he made his attempt.

The moment was made even more poignant because of what it took to get there. It was Lijana’s first time performing since a terrible 2017 fall that nearly killed her. It took her a long time to even be able to walk again, let alone walk a tight rope!

Before the performance, Lijana was interviewed on ABC, and shared she was really nervous because it’s so high up. Still, Lijana didn’t let it shake her: “I’ve got this,” she said. “I’ve got this.”

And she did! While Lijana visibly struggled at times and took a few minutes longer than her brother to complete the trek, they both did succeed in the end – as onlookers loudly encouraged them.

Nik and Lijana’s awesome feat is a lesson to us: never lead fear guide you, always strive for the impossible — because it is possible, no matter what seems to stand in our way.