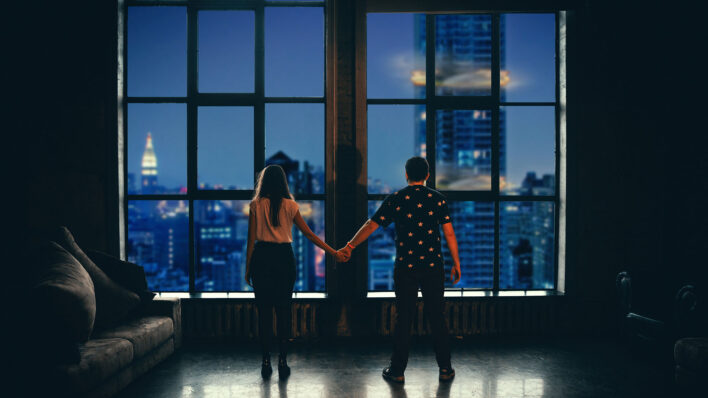 Can Your Relationship Survive Living With Your In-Laws?

Since I’ve had the “chance” to witness two solid marriages fall apart after those couples moved in with their in-laws,
By Flavia Medrut    July 30, 2019

Since I’ve had the “chance” to witness two solid marriages fall apart after those couples moved in with their in-laws,

Since I’ve had the “chance” to witness two solid marriages fall apart after those couples moved in with their in-laws, I promised myself that I would never live under the same roof with my partner’s parents — or even my own again. But you know what they say… “never say never”.

That’s not to say there was any tension — my boyfriend’s parents were the sweetest! They accepted me immediately and genuinely cared for me. That’s why, when my partner and I started discussing finances and the cuts we need to make if we someday want our own house, the inevitable solution (“we can live with my parents for a while”) came about.

I obviously rejected the idea at first, but then I seriously started to consider it. I loved my boyfriend’s parents and they loved me, right? Unlike the couples I’ve mentioned before, we’ve never had conflicts. Everyone seemed to know their place and this made me think that it could actually be a good idea for a short period of time.

In the first week everything seemed to be just fine. Everyone was responsible for cleaning their space. We were having dinners together and chatting after.

Then it hit me: my boyfriend’s mother would only let me help with cooking, like peeling or cutting some vegetables. Cooking had been the one activity me and my boyfriend would enjoy almost every evening. We loved cooking together while talking about our day at work, then eat while watching a favorite TV show.

No more of that! I had turned into a chef’s assistant while my partner was playing video games and his father was watching TV. I told myself that this wouldn’t last forever and continued chopping my onions.

While there were the inevitable arguments between family members, I would just shut up and pray they didn’t involve me. They had their own way of dealing with things. Not my circus!

Another few weeks passed and…

This man that I love used to leave his stuff all around the house. It took me three years of living with him to get it out of his system. But with his mama around, things got back to “normal” because she was more than accustomed to walking behind him and just picking up socks, pants, t-shirts, and whatever else he left on the floor.

Of course, I told him to put his clothes in the laundry basket and not wait for his mother to do it for him (thinking that she will appreciate it). But his mom told me to let him rest. Her son was tired after a day at work and she was more than happy to do it. Moreover, she started bringing him snacks while he was playing his video games.

I wanted a man, and his mother wanted her little boy back so…

Whatever we were talking about, his mother had a different opinion that was supported by her husband. We had to go out if we wanted to discuss certain matters, because inside the house there was no trace of intimacy and someone always knew “better”.

I didn’t ask for an interior designer for my future house, but there she was! I said I wanted a white bedroom, but she passionately disapproved because white gives the impression of being in a hospital. She decided what the color of my furniture should be, how I should paint my walls, and she had a “beautiful” rug that will perfectly go with my new living room… I was dying inside!

I was dying because right before we decided to move in, my boyfriend and I talked about boundaries and he said that I shouldn’t worry about anything. Still, I found myself in a situation where I had to politely say that I will decorate my house as me and her son please, because that’ll be the place we’ll live in and we want it to fit our taste and needs. As expected, my line was not well digested…

But I know someday I’ll have my white bedroom (which my partner agrees upon) so I tried to not take this chat too seriously. Let’s move to the next chapter…

While living alone, my boyfriend and I would constantly show affection. Of course, we let go of some of our “routines”; you just don’t have make out sessions in front of people – it’s distasteful at least. But in the bedroom, we needed our privacy.

But no! “Mama” would enter our room without knocking or anything, say what she had to say or just grab whatever she needed. She didn’t stop not even after she found me butt naked after taking a shower and begged her with my eyes to get out.

Our sex life you ask? Almost over! I was uncomfortable enough knowing that his parents are in the other room, but I was also terrified that they would burst in and find out that we’re not just holding hands. I was a 30 year old woman living with the fears of a 15 year old.

Things got even more personal

When I had to deal with “we want a nephew soon” and “maybe you should get a real job”, it was “game over” for me.

For them, the concept of “freelancing” is the equivalent of being jobless, although I’m perfectly able to sustain myself. I could brush that aside, but the pressure his parents began putting on me to have a baby became unbearable.

I didn’t want to respond aggressively even though I was enraged. I knew that at the core, these people only want the best for us. But that “best” that they had in mind simply didn’t match our lifestyle.

Finally, after a few nights of whispery talk under the blanket, we decided that we should go back to living by ourselves. Thank God, his parents understood and didn’t make a big fuss out of it.

I lived with my boyfriend’s parents for about five months and I haven’t gotten my medal yet.

Things are now back on track for us as a couple and we laugh at the experience, but back then, I was pissed off on a daily basis.

Each person and every couple is different. Living with your extended family might be part of your culture. If it didn’t work out for me, it doesn’t mean it won’t work out for you either. I’m just happy that at the end of the day, my relationship is still strong, and I still love my boyfriend’s parents. Besides, we’ve saved up some 5 months’ rent!