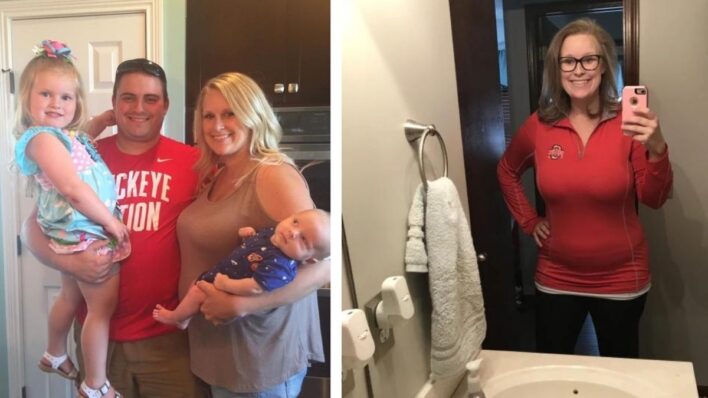 One mother defended herself againast a body-shaming stranger with a passionate message we all need to hear. Frozen section 27-year-old
By Bryan Liquor    June 22, 2021

One mother defended herself againast a body-shaming stranger with a passionate message we all need to hear.

27-year-old Charli Stevens of Columbus Ohio was at the grocery store with her five-month-old son
when she noticed a stranger staring at her, who appeared to be speaking to her.

Stevens explained that she assumed the stranger was saying “GO BUCKEYES!” since she was wearing the hometown college football team’s shirt and they were playing later that day.

However, nothing could have prepared her for what the woman was actually saying: “I think your clothes are a little too small on you.”

“I was completely shocked and so caught off guard that the only thing I could say was, ‘Excuse me?’”

The stranger followed with, “Well no offense, but you’re just a bit big to wear those types of clothes.”

When Stevens began to cry, the stranger didn’t let up.

“I’m not trying to be mean, but you should reconsider your outfit before leaving the house,” she said.

A shaken Stevens placed the items from her cart back on the shelf and retreated back to her car.

In a Facebook post that has since been removed, Stevens had some choice words for the insensitive stranger, starting with her story.

“How are people so rude? It’s no secret that I’ve gained weight throughout life. I’ve birthed two kids so it’s bound to happen. Do I realize I’m overweight? Yes. Do I want to be smaller? Yes. But am I okay with the way I look? Yes!!”

Stevens then continued by pointing out that the real damage from these types of mean comments is more than just skin deep.

“Why would a complete stranger go out of their way to insult someone? What if I was severely depressed? Or what if I was constantly made fun of for my weight and that one comment from that stranger pushed me over the edge.”

Supportive comments poured in, with many delivering a brutal reality-check to the cold stranger.

“When someone judges you. It says nothing about you. But it says everything about them!” commented one follower.

“You are beautiful. People who try to bring down others only do so because they hate their life and regret things they’ve done or didn’t do. When people are rude and hateful, usually it’s just a mirror of themselves. Don’t let anyone bring you down,” added another.

Stevens is quick to point out that her message has zero to do with clout and everything to do with compassion.

“I really hope those that read my post will just remember to instill kindness in their children’s lives, because our children are our future.”

While the commenters are likely right about the mean stranger’s own insecurities, the real power for change lies in us.

As Stevens mentioned, it’s the power of compassion, of recognizing that we can’t possibly know what someone is truly going through. By considering that, we can all be kinder with our words and more attentive with our actions so that we can all thrive.

What Is Emotional Blackmail? How to Spot It and How to Handle It