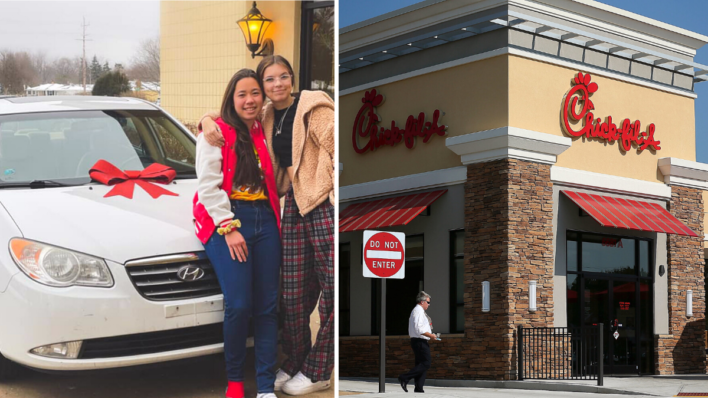 One teenager gave away the brand new car she won to her best friend, who needed it more.
By Lindsey Staub    March 28, 2022

One teenager gave away the brand new car she won to her best friend, who needed it more.

Inside the Grand Meridian in Appleton, Wisconsin, the room went quiet as a hand pulled out a raffle ticket. Whoever’s ticket corresponded with the numbers called would walk out of the Chick-fil-A Christmas party with a new car. Unless that ticket belonged to Haley Bridges. In that case, Haley’s best friend and coworker would get the car. And that’s exactly what happened.

Seventeen-year-old Haley Bridges started working at Chick-fil-A in late August after a classmate referred her to the job. She quickly bonded with her coworkers, but she got especially close to one friend in particular.

“I love working here. Not only are the people that work here amazing, but it has taught me so many new things,” Haley said. “I always look forward to going to work, I get to see my second family.”

Hokule’a Taniguchi, Haley’s 19-year-old coworker, met Haley through work. By September, Hoku and Haley would hang out frequently, even outside of work.

“What we do most of the time is chill at whoever’s house we choose,” said Haley. “We are very spontaneous, as well as our little close friend group we have.”

Hoku rode her bike to work every day, even in winter. Haley recognized that Hoku needed the car more than she did, and Haley and her friends decided that if one of them were to win the raffle, they would gift the car to Hoku.

Our friend group and some other friends decided to all put one in for her. We were all very nervous that someone else would get chosen, but we kept our hopes up.

The raffle was the main event of the Chick-fil-A Christmas party every year, with rumors circling that this year’s prize was a car. The rumors were verified when Haley walked into the Grand Meridian, where the party was taking place. Displayed in the banquet hall was a car.

Each employee was given raffle tickets that corresponded to the number of hours they worked. Haley had five tickets.

Luckily, those five tickets were enough: Haley was announced as the winner of the grand prize.

“My heart felt as if it was racing and we both stood up and ran to each other,” Haley said.

Everyone in the room felt like they were gone, it felt as if it was just us two in the moment. We hugged each other hard and cried so much. Everyone else was either crying or clapping. We all had a big group hug with everyone near us and it felt so unreal experiencing this.

One Teenager Proved the Importance of Being Selfless

Inspired by Haley’s kindness, strangers were moved to help. After Haley’s aunt organized a fundraiser, strangers donated to Haley so that she could pay off the car she already owned. As for Hoku, she is planning to move to an apartment closer to the Chick-fil-A where she works, and the car has been put to good use as Haley and Hoku have gone on many rides together in it.

Though any teenager would jump at the chance to win a new car, Haley put the needs of her friend in front of her own desires. Haley is an example of a true friend, someone who cares about you enough to commit selfless acts for your benefit. Anyone is lucky to have someone like Haley looking out for them.

be selfless
“There is nothing more beautiful than someone who goes out of their way to make life beautiful for others.” – Mandy Hale.
Tags
Share
← Prev Post Next Post →