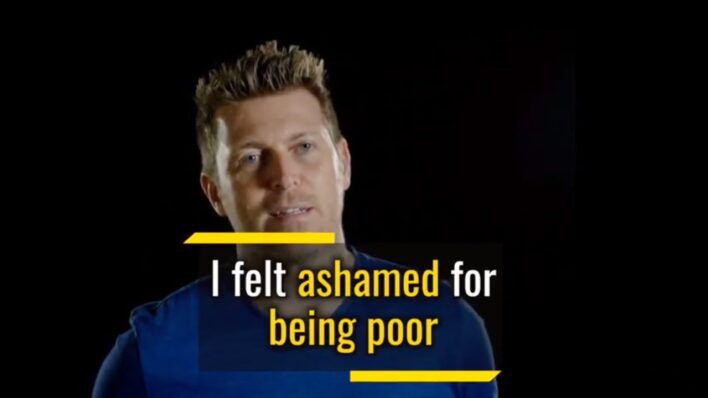 Christian Mickelsen | Why Poverty Does Not Define You

Life coach extraordinaire Christian Mickelsen shares how he overcame a life of bullying, poverty, and debt to find true wealth. He reveals how transforming your mindset from one of poverty to one of abundance and gratitude can lead to success.

When I was in fifth grade I felt ashamed for being poor. My parents had gotten divorced, my mom was a waitress and she was raising four kids on a waitress income. So I was wearing hand me downs from my brothers that were almost a decade older than I was. One of the most popular kids in school, he came up to me when I was wearing bell bottom jeans in the ’80s, which were not cool back then, and he pushed his shoe at the bottom of my flared out jeans and he said, “Ding dong.” And he rang the bell on my bell bottoms. All the kids laughed, and I wanted to shrink up and disappear. And I linked up in my mind that being poor meant people don’t like you. And being rich, having cool, nice things, people wanna be around you, people wanna be your friend.

I felt sick to my stomach every time I had to go to school. And I just wanted to be invisible. So elementary school was hard, junior high was even harder, high school kinda sucked too. And then I graduated college, and I got a job. And I knew the first day of that job that this was gonna be a job I didn’t like. But I had this idea for a business that I was going to start. And I thought you know what? I’m just gonna work here for maybe four months or so, just collecting a paycheck to support me while I get my business off the ground.

There was this guy that worked there, his name was Charles. And he was a short guy from the military. One day he just walked up to me and he started calling me a loser and giving me the L on his forehead. Every time he would see me at the office he would just come up to me and be like, “Loser,” in front of everybody. All of a sudden I didn’t know what to say, and I felt like I regressed all the way back to elementary school when I was getting teased back then.

And that was really the straw the broke the camel’s back. I just remember laying in bed one night next to my girlfriend thinking how did I end up in this life? Working at a job I hate in a company that sucks and having this dream for a business that was going nowhere, and a relationship that’s not working, completely out of shape and miserable? I felt like a stranger in my own life, and I felt alone and lonely laying right next to this woman that I loved.

I didn’t know what to do, but I had heard of personal coaching. And through a friend I was introduced to my first personal coach. I talked to her on the phone and for the first time ever I had somebody that I could talk to, that I could share the challenges I was going to that could challenge me and say, “Look, I believe in you, you can do more than this.” I started working out regularly, I started taking action to grow my business. My company was I would call big stores and restaurants to see if they would wanna sell their gift cards on my website. And then finally I got ahold of somebody at Borders Book Store, they were the first company to finally say, “Yes, we’ll partner with you. But you have to pay for them up front.”

So I said yes, and I bought $25,000 worth of gift cards. I got lots of stores and restaurants to say yes now since I was buying them up front. But as I started taking more action on my business and exercising again, I felt alive again. Eventually I quit that job and I was working for myself full-time. Even when my business was going good, I was constantly worrying about money. And in the first two years I struggled to pay my mortgage, I was constantly worrying about whether I could pay my bills. My income went up and down. I was maxed out on all my credit cards.

I remember I was taking out the garbage one day and I was thinking oh my God, it’s so hard working for myself and being my own boss. Maybe I should just go back to having a regular job. And since I was taking out the garbage I thought maybe I should become a garbage man, because maybe then I can get a steady paycheck and some benefits. And even thought it might be hard work physically, I just thought I wouldn’t have to think so hard. ‘Cause I was just feeling burned out from working so many hours, but not making a lot of money. And then I thought I’m just gonna quit. And that’s when I talked to one of my best friends, and he said, “Dude, you can’t quit.” And he challenged me to read a book a week.

So I read a book a week for 36 weeks in a row. One of the books was a book called ‘The Prophet’ by Kahlil Gibran. And in the book he talks about how if you do work you don’t love, if you bake bread with bitterness in your heart, you’ll bake a bitter bread. Now I realize that passion is everything when it comes to having your own business. It’s gotta be something you’re really interested in, it’s gotta be something you’re excited about. And I wasn’t super passionate about my business. I was excited to be able to work for myself, but ultimately I wasn’t super passionate about it. And I just said, “You know what if I lose my house, I lose my car, but I’m doing what I love then so be it.” And that’s when I thought well maybe I could be a personal coach.

So I started marketing myself as a coach, and I just started focusing on doing what I love, trying to help more people. And just being focused on helping people, eventually my business started taking off. Started getting more and more clients, helping more and more people. Eventually a handful of coaches asked me if I could help them share my secrets with them and help them grow their business. And that’s when I realized that all the things that I had to learn through trial and error, I could share with other coaches and they could become successful much faster than I did.

My company has made the Inc 5,000 list of fastest growing companies in North America, and we’ve done it for the last three years in a row. So my advice to anyone wanting to achieve high levels of success, don’t just hope to be a millionaire, don’t just dream to be a millionaire, decide to be a millionaire. Whatever it is that you wanna achieve, whatever goal you want, you can have it. All you have to do is decide to have it, and your success is inevitable if you’re willing to do the work. If you’re willing to take action to make it happen in the world, and if you’re willing to do the work on yourself. And work through your fears, you doubts, your limiting beliefs. Try something out and have it not work out. You gotta be willing to be criticized by other people. Even take risks, financial risks.

The most valuable things I learned were how to let go of the poverty mindset, the welfare mindset that I grew up in, and to have a much more abundant mindset. When I grew up feeling like I was poor, in reality I was even rich back then, I just didn’t realize it. But when you let go of the fear of not having enough, then you realize that there’s always been enough, and there always will be enough.