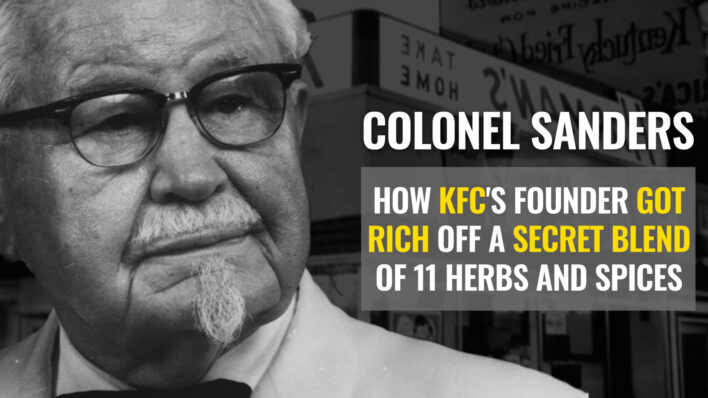 Colonel Sanders’ Life Story: How KFC’s Founder Got Rich Off a Secret Blend of 11 Herbs and Spices

We all know about KFC, the fast food chain that made the whole world fall in love with its recipe
By Lidiya K    January 19, 2018

We all know about KFC, the fast food chain that made the whole world fall in love with its recipe for fried chicken. Despite its ups and downs over the decades, it has remained one of the most popular restaurant chains in the US. Yet, little is known about its founder, Colonel Sanders.

He isn’t the average entrepreneurial success story. There was a lot going on before he considered himself successful. It all began by selling fried chicken from a roadside restaurant in Kentucky when he saw the interest in this type of business. Up until that point, however, there were plenty of challenges in his life.

Born into poverty, losing his father, working from a young age, and jumping from career to career, were all moments that shaped the future king of fried chicken. These moments led him to enter the fast food industry, run a service station at the age of 40, and then perfect his special recipe over the next decade. His early and later life is inspiring, and we can all learn from his failures and successes.

So, let’s dive into the man behind the brand, Colonel Sanders, and his journey to creating the most successful fried-chicken empire the world has ever seen:

The beginning was hard

Colonel Harland Sanders was born in 1890 on a farm outside Indiana. His father, a hard-working man, died when Colonel was just 5, leaving him to care for his 2 younger siblings while his mother worked to support them.

The children were raised in poverty, and that meant everyone had to work from a young age. Colonel’s first job was as a farmhand at the age of 10. Losing it soon after upset his mother so much so that she yelled at him for failing to impress his boss. Colonel recalls that experience as traumatic, yet that did not stop him from pursuing other jobs.

The determined boy quit school so he could work full-time. By the time he was 17, he had already had plenty of jobs, such as a painter, conductor and soldier. After that, he worked as a cleaner, fireman and blacksmith. He also studied law and worked briefly as a legal counsellor, representing railroad workers who had been injured on the job. But that did not last long, and soon he was selling insurance, then Michelin tires. He knew that his career was unstable, jumping from job to job. Yet some of those jumps were because he was let go.

Instead of giving up, though, that encouraged him to try harder.

“One has to remember that every failure can be a stepping stone to something better.” Embracing the entrepreneur within

Six years later, he opened a gas station, where he also sold fried chicken to hungry commuters along the highway.

Having cooked for his siblings growing up, he was a seasoned chef at this point, and had many delicious recipes under his belt; recipes hungry travellers were more than delighted to try. His Kentucky fried chicken, in particular, became so popular that he opened a restaurant across the street.

He now had more tables to serve and the chance to treat more customers to his food. He did this for years and became known for his delicious secret blend of seasoned chicken that could not be found anywhere else. As his popularity grew, he was named a Kentucky Colonel by the state governor, an honour only a rare few received. Not long after, the US started preparing for World War II. That led to fewer and fewer customers, and Colonel Sanders soon had to close the restaurant. Still, he was determined to make his recipe even more popular and decided to franchise it.

“I’ve only had two rules: Do all you can and do it the best you can. It’s the only way you ever get that feeling of accomplishing something.”

He was a visionary and his journey was just beginning. He believed his next big thing was the secret blend he had created, that people already liked so much. It was his only prized possession: a fried chicken recipe made up of 11 different herbs and spices.

By 50, he perfected his chicken recipe using a patented pressure fryer that reduced cooking time. He began traveling across the country, from one diner to the next, cooking and making just enough to continue doing it. He slept in the back of his car, was 60 years old, and found great pleasure in teaching customers how to make his recipe using his unique techniques.

“I was sixty-six years old. I still had to make a living. I looked at my social security check of 105 dollars and decided to use that to try to franchise my chicken recipe. Folks had always liked my chicken.”

It took a shocking 1009 rejections before he was given a chance. And as it usually happens in life, one chance is all we need. 1952 was the year when the “Kentucky Fried Chicken” recipe was franchised for the first time.

Colonel saw immediate success and the company soon grew to over 600 franchised outlets.

At 73, he sold KFC to investors for $2 million (which is more than 15 million today). He continued to visit KFC restaurants across the country and still remains on the logo to this day. More than a fast food chain

Today, KFC is the world’s fourth-largest restaurant chain with over 20,000 locations across the globe. In Japan, it has even become a Christmas tradition.

Colonel Sander’s secret chicken recipe remains safe in a vault in Louisville, Kentucky. But he was always willing to share the secret to his success. Aside from his blend, what he considers to be the foundation of creating a brand like KFC, is integrity.

“I’ve only had two rules. Do all you can and do it the best you can. It’s the only way you ever get that feeling of accomplishing something.”

Colonel Sander’s life story leaves us with this:

Your past does not define your future success. In fact, your childhood struggle, age, and failures can be stepping stones to a future beyond your wildest imagination.

Colonel never gave up. He was in business at the age of 40 after so many misfortunes. And it wasn’t until he was 60 that he started seeing some recognition and progress. His success came about during a period when many retire. But with determination, passion, and vision, he conquered the world.