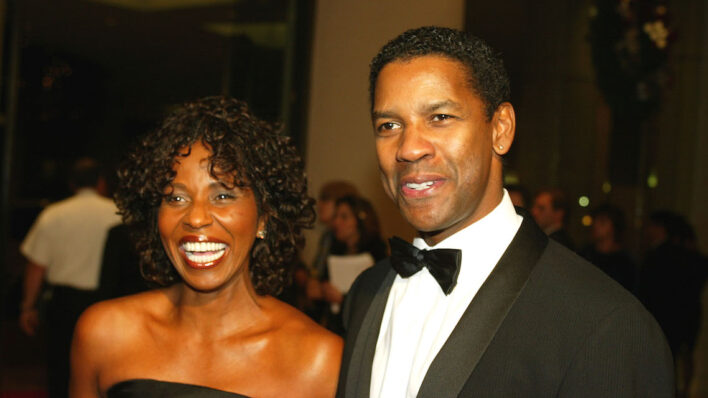 Denzel Washington and his wife Pauletta have been together for almost 40 years. What is the secret behind their long lasting-romance?
By Barbara Pavone    June 12, 2020

Denzel Washington and his wife Pauletta have been together for almost 40 years. What is the secret behind their long lasting-romance?

Denzel Washington and his wife, Pauletta Washington (née Pearson), have been married for nearly four decades. Four. Decades. It’s an impressive milestone for any couple, but it’s even more noteworthy in Hollywood. While the two actors have had their share of ups and downs, they’ve put in the work and it’s paid off, big time. These days, they’re the proud parents of four, are both still acting, and are as in love with each other as they’ve ever been.

Here’s what we can learn from Denzel and Pauletta Washington’s impressive four-decade romance:

People come in and out of your life for a reason

Denzel and Pauletta Washington first met on the set of the 1977 TV movie Wilma, but it wasn’t until circumstance and pure luck brought them together again a year later that they began laying the foundation for an impressive future together.

“The first movie I ever did — TV movie — was about Wilma Rudolph and I played Wilma Rudolph’s boyfriend,” Denzel Washington recalled on Live with Kelly and Ryan in 2018. “Pauletta was one of the track stars,” he continued. “I met her then, but I didn’t meet her then. I saw her then,” he explained.

Shooting wrapped and they went their separate ways. It wasn’t until months later that Denzel would actually meet Pauletta, proving that people come in and out of your life for a reason. And when they return, they can take on a completely different role.

Recalling their fateful second encounter, Pauletta told the Oprah Show in 1996, “A mutual friend of ours, who was also in the film, had given a party. And Denzel and his friends came at the very end of the party,” she remembered. “We spoke again. We were reintroduced.” Then something truly spectacular happened. “The next night, I attended a play,” Pauletta continued.

I got there late, so I snuck in and just sat down. I didn’t look at who was around me, then at intermission, the lights came up, and we were sitting next to each other.

Pauletta Pearson to The Oprah Show

Denzel remembers the accidental meeting a little differently. During his appearance on Live with Kelly and Ryan, he teased his wife, claiming that she had actually planned to meet him at the play. “I had talked at that party, I talked about going to see a play,” he explained. “I went to see the play and at intermission the lights came up and she was sitting [there]. She said she just happened to go see the play, but…” He laughed, “I’m getting in trouble as I speak!”

They tease each other in the best way possible

Being able to laugh together is key, but if you can tease each other without anyone’s feelings getting hurt, that’s even better! Denzel and Pauletta Washington are real pros when it comes to the latter — just ask them about their first date. More specifically, who paid for it.

The topic has come up during numerous interviews and, despite the fact that their first date happened back in the ‘70s, the pair still remember every detail and still like to tease each other about it in the cutest way. “I actually paid,” Denzel told Jimmy Kimmel in 2017 while Pauletta assured E! News in 2019 that it was her footing the bill.

“I paid for the cab ride,” she told the outlet, noting that it was the same as her paying for the entire date because “we went to a party [so] there was nothing to pay for after we got there.” Denzel tried to make his case, clarifying that he meant to pay, “but then I’m watching the meter and I’m running out of money!” Pauletta laughed, “He turns to me and says, ‘I have no money!’” The actor cheekily shot back, “I didn’t say that!”

The story of their engagement elicits a similar reaction. Speaking with Access Hollywood in 2013, Pauletta revealed that Denzel actually proposed to her three times before he got the answer he was looking for. “Twice!” Denzel interjected, but his love quickly set the record straight. “It was three times. I know with age sometimes things [go], the mind,” she joked. “I turned you down twice and the third time we did it.” Taking it all in good stride, Denzel laughed, “You heard it here first: She turned me down, she said no. And since it was three times, that means she turned me down twice.”

Give credit where credit is due

Regardless of how many proposals there actually were, the couple finally said “I do” in June 1983. As Pauletta told Oprah, she knew he was The One because of his spirit.

I thought he was cute, but I fell in love with his spirit, really. That I saw first. And then I thought, hm, not a bad package, you know?

Soon after tying the knot, the pair began to grow their family. In 1984, they had their first child, son John David, then daughter Katia arrived in 1987 and, in 1991, they had twins Olivia and Malcolm.

Asked about the strength of their family unit, Denzel isn’t shy about crediting his wife. As he told The Guardian in 2010, “My children are good people. They are not perfect, but they are generous and humble and kind. My wife did that.”

He shared a similar sentiment with Reader’s Digest, saying their parenting style was a “hybrid” of “what my wife and I learned from our parents,” but stressing that “my wife’s done a great job. She’s been the consistent one, just trying to give them a normal life.”

Giving up is easy — a strong union isn’t

Despite having a seemingly perfect relationship, Denzel and Pauletta Washington (who renewed their vows in 2002 in South Africa) will be the first to tell you that they’ve had plenty of ups and downs.

When rumors of infidelity and divorce plagued them in 2013, Denzel denied all cheating accusations but did admit that marriage is difficult. Responding to a fan during a reddit AMA, he wrote, “You have to work at it. Not give up on each other. It’s a commitment,” he proclaimed. “It’s not all the honeymoon, it doesn’t last forever, so you work at it. And hopefully you’re good friends first, that might help!”

Meanwhile, Pauletta appeared to share a cryptic message about working through infidelity when she told Ebony magazine, “I live with this man. I see the down part. I see the sad part. I see every part. He has and knows he has that stability in me as his wife,” she declared.

That gives him strength, regardless of if he misuses it. I can’t dwell on that.

Denzel added that they “go through ups and downs, like any couple” before pointing out that “we live in a time — and it’s not for me to judge anyone — when people give up too easy.”

The right partner turns a house into a home

While Denzel Washington is adamant that “there is no secret to the perfect marriage,” there are certain aspects of his relationship with Pauletta that have contributed to their long and happy life together. For one, “a spiritual foundation helps everything – marriage, work, peace of mind.”

Speaking with People in 2018, he joked, “I do what I’m told. I keep my mouth shut!” Getting serious, he added, “There’s too many things! What pops into my head: security, food, a beautiful home. The difference between a house and a home, it’s a big difference,” he explained.

You can buy a house, but that doesn’t make it a home – and not to say a man can’t make a home a home, but my wife has made our house a home, and raised these beautiful kids and protected them and sacrificed for them, she did the heavy-lifting.

So while there’s no such thing as a perfect relationship, a loving and fulfilling union is possible… if you put in the work. There are sure to be bumps in the road (even couples who have been together for decades experience them), but the outcome is entirely in your hands.

If there’s one overarching lesson we can learn from Denzel and Pauletta Washington’s marriage it’s that relationships require work — and plenty of laughs. That, and the importance of never forgetting to appreciate your partner, no matter how many years go by.