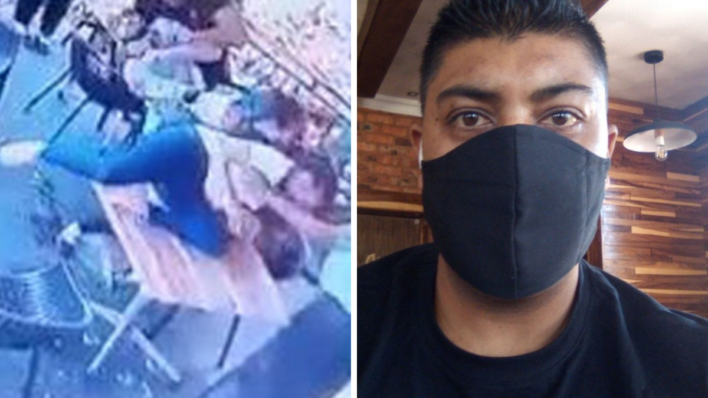 In a moment’s notice, a restaurant owner went from onlooker to hero when he saved a little girl from the
By Bryan Liquor    August 11, 2021

In a moment’s notice, a restaurant owner went from onlooker to hero when he saved a little girl from the clutches of a kidnapper.

Terror across the table

Most crazy events start as just a regular day, and this one was no different.

CCTV footage captured a woman sitting on the terrace of Bella Napoli pizza restaurant with her four-year-old daughter and another woman.

Meanwhile, restaurant owner Dishal Sooku had been sitting next to the family with his father when he alerted him to a man acting suspiciously in the mall.

Suddenly, the man raced towards the restaurant. Moments later, he jumped over the terrace rail and grabbed the woman’s four-year-old daughter by the neck.

Said one eyewitness to the Ridge Times, “It didn’t look like he was trying to take her, he was really trying to hurt her. His eyes were dead.”

In an instant, Sooku swooped in with only one goal, he told News24.

“At the time my only thought was ‘I need to save this child.'”

“The only thing to do was to restrain him in a way that he would let go of the child.”

Unfortunately for the madman, Sooku had been practicing jujitsu for years and knew exactly how to take the man down. He quickly took him to the floor and detained him until security came.

A getaway vehicle reportedly also fled the scene and the suspect is said to be a heavy drug user, reports SA People.

Fortunately, the girl was unharmed.

The video has since amassed millions of views and has turned Sooku into a hero. According to the Sun, a post with his picture by page SA Long Distance Truckers lauds his actions.

“Dishal you sir are a hero and a man in a million. Your act of bravery has not gone unnoticed. We wish you all thats good in this world.”

However, Sooku is quick to deflect any hero-talk, instead crediting his martial arts training for being ready.

” I don’t consider myself a hero. People say you’re at the right place at the right moment, and it all comes with preparation. I think the years experience in martial arts is what allowed me to react the way that I did.

For Sooku, the girl’s safety is reward enough.

“I just with her all the best and I’m glad I could have done what I did,” he said.

Sooku can say what he wants, but he definitely deserves all the praise he’s received. If Sooku wasn’t there, who knows what the title of this piece would be.

However, it’s a reminder that not all danger takes place after dark. The scariest part about this was it took place in a crowded mall in broad daylight.

Whether it’s at the park or going to school, a child’s path through life is only as safe as we make it. Like one brave man showed us, we can all contribute to keeping our children safe.