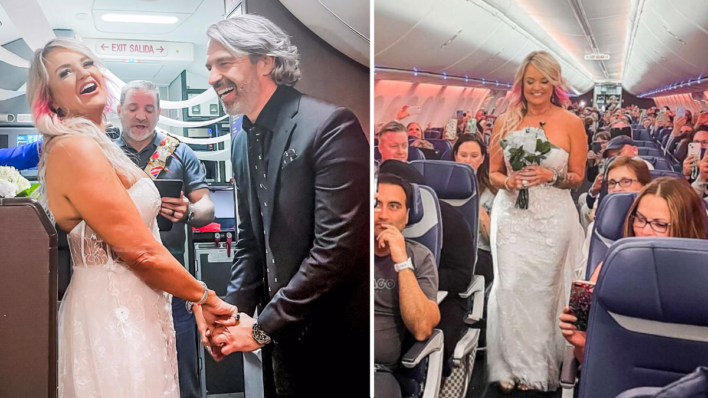 When a couple that was supposed to get married in Las Vegas found out their flight was cancelled, they took an unconventional approach.
By Lindsey Staub    May 17, 2022

When a couple that was supposed to get married in Las Vegas found out their flight was cancelled, they took an unconventional approach.

What was supposed to be a Las Vegas wedding turned into a Southwest one. For one Oklahoma couple, the wedding aisle was really an airplane aisle.

Pam and Jeremy Salda planned to tie the knot in Las Vegas on Sunday, April 24. They already reserved an appointment to sign a marriage license and booked a hotel on the Strip, and Pam even bought a wedding dress online. All that was left was their flight from Oklahoma City to Nevada.

Due to bad luck and turbulence, their original flight was canceled, and they were forced to book through a different airline. This sudden change meant that the couple was cutting it close, and worried that they would be late to the altar, they both wore their wedding attire to the airport.

It was at the Dallas-Forth Worth International Airport, where Pam and Jeremy were waiting for a connecting flight, that a man overheard their story and warned them that they might not make it in time. Soon after, Pam and Jeremy watched as their flight got delayed over and over again, until it was finally canceled.

But not all hope was lost. The soon-to-be Saldas found a Southwest flight to Vegas out of Love Field Airport and called an Uber to drive them to their new location. The man who overheard their story joined them in the Uber: He was an ordained minister, and he said he would marry them if all else failed.

It’s like a scene from a movie. I’m literally running through the airport, through security, in a wedding dress. People are shouting at us, ‘Congratulations! Yay!’”

After the trio arrived at the airport, they boarded their new plane. Once the flight crew was notified that a marriage would potentially take place onboard, they began to get creative. They decorated the cabin with toilet paper streamers and downloaded the song “Here Comes the Bride.” The flight took off with several bottles of champagne onboard.

How a Couple’s Marriage Was Literally Made in ‘Heaven‘

Once the seatbelt sign was turned off, the lights were dimmed and the minister officiated Pam and Jeremy’s wedding.

I can’t wait to be your co-pilot through life. I’ll be the check to your cross-check. And any turbulence I wanna weather it with you.

RELATED: She Can’t Form New Memories, So He Shows Her Pics Of Their Wedding Every Day

After the couple kissed, they danced up and down the aisle to Bruno Mars’ “Marry You.” “Walking down the aisle, literally everybody’s smiling, everybody was feeling it,” Pam said.

Though it wasn’t what the Saldas originally imagined for their wedding, the ceremony 37,000 feet in the air was a beautiful testament to their relationship. With the right person, a bit of turbulence just strengthens the bond.