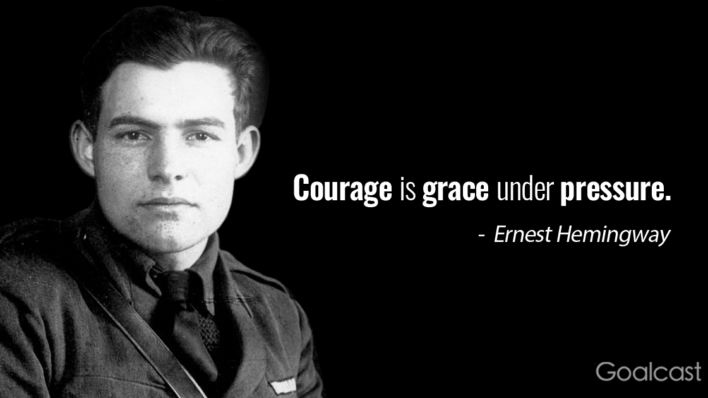 21 Ernest Hemingway Quotes to Use as Guiding Principles

Leaving behind an impressive body of work written in an iconic style, Nobel Prize winner Ernest Hemingway is one of
By Flavia Medrut    September 19, 2018

Leaving behind an impressive body of work written in an iconic style, Nobel Prize winner Ernest Hemingway is one of

Leaving behind an impressive body of work written in an iconic style, Nobel Prize winner Ernest Hemingway is one of America’s greatest writers.

Hemingway’s succinct and clean prose style was imitated by many other authors, especially in the 20th century. He used short and simple sentences, leaving aside any verbosity that would imply further interpretation or emotional rhetoric.

Much of Hemingway’s work was inspired by the war and his characters embody his own values and way of thinking — intense masculinity and confidence that harmoniously coexist with sensitivity. Based on this he created a set of principles known as the ‘Code Hero’ which he defined as ‘a man who lives correctly, following the ideals of honor, courage and endurance in a world that is sometimes chaotic, often stressful, and always painful.’

By writing masterpieces like ‘A Farewell to Arms‘ or ‘The Old Man and the Sea’ and by living an adventurous life, Hemingway earned himself a fame surpassed by few.

Here are 21 Ernest Hemingway quotes to help you become a more virtuous person. The best people possess a feeling for beauty, the courage to take risks, the discipline to tell the truth, the capacity for sacrifice. Ironically, their virtues make them vulnerable; they are often wounded, sometimes destroyed.

Let him think that I am more man than I am and I will be so. Courage is grace under pressure.

The best way to find out if you can trust somebody is to trust them.

The most painful thing is losing yourself in the process of loving someone too much, and forgetting that you are special too.

Never go on trips with anyone you do not love.

Every man’s life ends the same way. It is only the details of how he lived and how he died that distinguish one man from another.

No, that is the great fallacy: the wisdom of old men. They do not grow wise. They grow careful.

The first and final thing you have to do in this world is to last it and not be smashed by it.

The world breaks everyone, and afterward, some are strong at the broken places.

People were always the limiters of happiness except for the very few that were as good as spring itself. Happiness in intelligent people is the rarest thing I know.

There is nothing to writing. All you do is sit down at a typewriter and bleed.

Never think that war, no matter how necessary, nor how justified, is not a crime.

Worry a little bit every day and in a lifetime you will lose a couple of years. If something is wrong, fix it if you can. But train yourself not to worry: Worry never fixes anything.

It is good to have an end to journey toward; but it is the journey that matters, in the end.