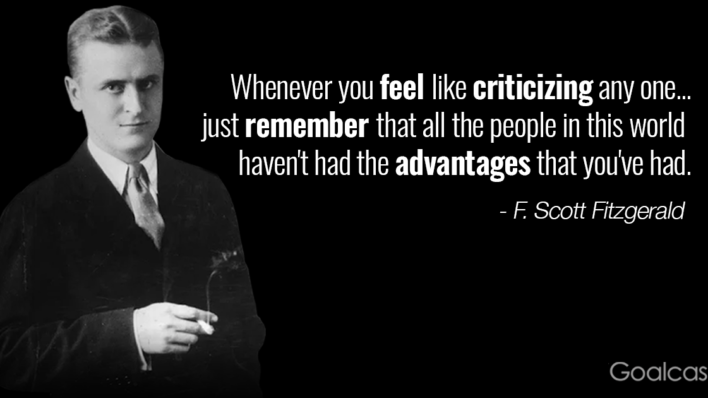 20 F. Scott Fitzgerald Quotes on Life and Matters of the Heart

While achieving limited success in his lifetime, F. Scott Fitzgerald is now regarded as one of the greatest American writers
By Flavia Medrut    September 6, 2018

While achieving limited success in his lifetime, F. Scott Fitzgerald is now regarded as one of the greatest American writers

While achieving limited success in his lifetime, F. Scott Fitzgerald is now regarded as one of the greatest American writers of the 20th century. He is renowned for his most brilliant novel The Great Gatsby and for his turbulent private life, with his wife, Zelda. Whatever the couple went through was almost as celebrated as the writer’s work.

Fitzgerald became famous at the age of 24 after publishing his first novel This Side of Paradise. Its success made it possible for him to marry his muse, Zelda Sayre, the daughter of an Alabama Supreme Court judge.

Sadly, at some point Fitzgerald descended into drinking and his wife suffered a mental breakdown from which she never recovered. The little roads to Zelda’s sanitarium and her struggle with mental illness inspired Fitzgerald’s fourth novel — Tender is the Night. This seems to be the author’s most moving book, even though it wasn’t a commercial success.

Fitzgerald’s last novel was only half-finished when he died of a heart attack at 44 years old. The Love of the Last Tycoon was published posthumously.

Enjoy the following 20 F. Scott Fitzgerald quotes on life and matters of the heart. Show me a hero, and I’ll write you a tragedy.

The loneliest moment in someone’s life is when they are watching their whole world fall apart, and all they can do is stare blankly.

Reserving judgments is a matter of infinite hope.

I don’t want to repeat my innocence. I want the pleasure of losing it again.

There are only the pursued, the pursuing, the busy and the tired. Whenever you feel like criticizing any one… just remember that all the people in this world haven’t had the advantages that you’ve had.

That is part of the beauty of all literature. You discover that your longings are universal longings, that you’re not lonely and isolated from anyone. You belong.

The idea, you know, is that the sentimental person thinks things will last – the romantic
person has a desperate confidence that they won’t.

I was within and without, simultaneously enchanted and repelled by the inexhaustible variety of life.

You see I usually find myself among strangers because I drift here and there trying to forget the sad things that happened to me.

I don’t want just words. If that’s all you have for me, you’d better go.

Actually that’s my secret — I can’t even talk about you to anybody because I don’t want any more people to know how wonderful you are.

There is no confusion like the confusion of a simple mind… Let us learn to show our friendship for a man when he is alive and not after he is dead.

There are all kinds of love in this world but never the same love twice.

Never confuse a single defeat with a final defeat.

No, she wasn’t beautiful for something as temporary as her looks. She was beautiful, deep down to her soul.

No amount of fire or freshness can challenge what a man will store up in his ghostly heart.

I’m a slave to my emotions, to my likes, to my hatred of boredom, to most of my desires.