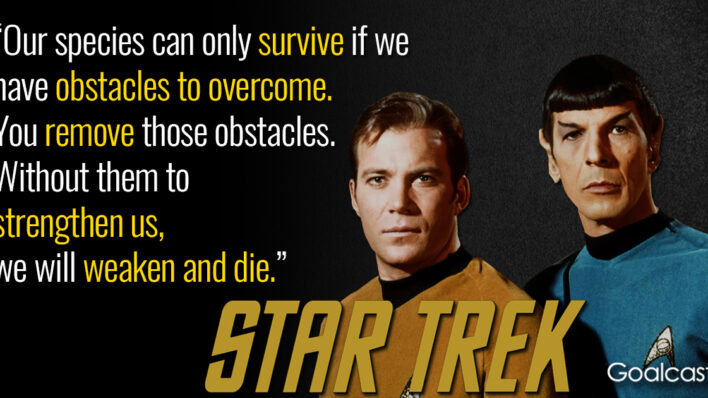 If you haven’t watched Star Trek, you’ve at least heard about it. The sci-fi television series created by Gene Roddenberry
By Flavia Medrut    March 9, 2018

If you haven’t watched Star Trek, you’ve at least heard about it. The sci-fi television series created by Gene Roddenberry has earned millions of fans over the years.

Roddenberry was allegedly inspired by Gulliver’s Travels and a TV series called Wagon Train to create Star Trek. Each episode of the series is built as an incredible adventure, but also as a morality tale, considering that the episodes depict cultural realities and conflicts like war and peace, sexism, human rights, religion, economics, loyalty, racism and technology.

Due to this approach, Star Trek is not only about space adventure and exploration. The franchise is also recognized for being one of the first TV series with a multiracial cast and applauded for its attitude toward civil rights. The Star Trek world was full of wisdom and great lines, but here are 22 of the most meaningful quotes from its characters.

A man either lives life as it happens to him, meets it head-on and licks it, or he turns his back on it and starts to wither away.

Logic is the beginning of wisdom, not the end.

You may find that having is not so pleasing a thing as wanting. This is not logical, but it is often true.

Sometimes a feeling is all we humans have to go on.

With the first link, the chain is forged. The first speech censored, the first thought forbidden, the first freedom denied, chains us all irrevocably.

The prejudices people feel about each other disappear when they get to know each other. — Captain Kirk If we’re going to be damned, let’s be damned for what we really are.

Perhaps man wasn’t meant for paradise. Maybe he was meant to claw, to scratch all the way.

In critical moments, men sometimes see exactly what they wish to see.

Change is the essential process of all existence.

Our species can only survive if we have obstacles to overcome. You remove those obstacles. Without them to strengthen us, we will weaken and die. Curious, how often you humans manage to obtain that which you do not want.

One man cannot summon the future. But one man can change the present!

To all mankind — may we never find space so vast, planets so cold, heart and mind so empty that we cannot fill them with love and warmth.

A species that enslaves other beings is hardly superior — mentally or otherwise.

Now, I don’t pretend to tell you how to find happiness and love, when every day is a struggle to survive. But I do insist that you do survive, because the days and the years ahead are worth living for!