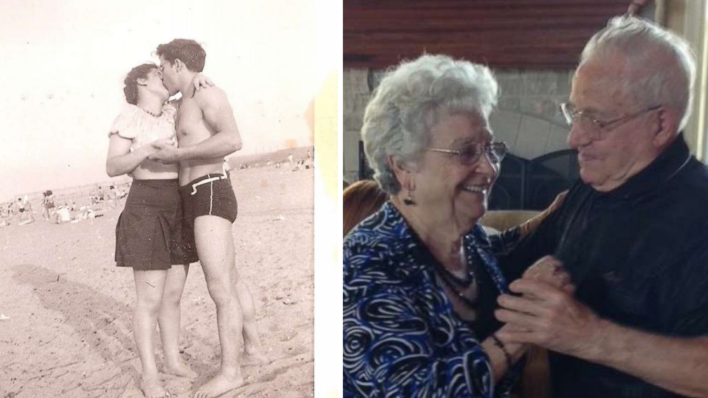 Day in and day out, healthcare workers have been on the front lines in the fight against coronavirus. And while
By Joel Balsam    December 1, 2020

Day in and day out, healthcare workers have been on the front lines in the fight against coronavirus. And while we might no longer see people cheering in the streets or putting signs up in their windows as much as we used to, that doesn’t mean we aren’t still thankful for the service of these brave warriors.

One family that is especially thankful is that of the late Carmen Siciliano, 98, and his wife Mary, 94. Frontline workers allowed the elderly couple, who had been married for 76 years, to stay in the same hospital room while they were both sick with COVID-19.

A symbol of true love

It was Mary who was first diagnosed with coronavirus on October 23. Two weeks later, Carmen got sick as well and the two were admitted to Advocate Good Samaritan Hospital in Downers Grove, Illinois on the same day.

Gail Grazian and Joyce Andringa, the couple’s daughters, had a special request for the hospital’s staff. They wanted to know if their parents could stay in the same room as they knew that they’d be much happier side by side. Anyone who knew the Sicilianos could see how they were still in love.

“We had a wonderful childhood and my parents inspired us with their 76 years of marriage and with their love,” Grazian told “Good Morning America.”

“[They] taught us the meaning of true love and commitment and devotion towards one another.”

The hospital made an exception

Advocate Good Samaritan Hospital doesn’t usually put two patients in one room, but they decided to make an exception.

“It’s extremely important for us to have holistic care and treat the whole patient,” said Renee Scheier, the interim manager of Good Samaritan’s clinic resource unit.

“We know putting the couple together would provide emotional support to the family quarantining at home as well.”

As a matter of fact, it did, and the Sicilianos were together until Carmen died on November 12. Mary is now recovering at home from both the loss of her husband and COVID-19.

“It provided us with a sense of comfort. They’re our angels on earth and they’re our heroes… My sister and I do not say that lightly.”

Joyce Andringa said of the doctors and nurses at Good Samaritan.

Along with their two daughters, Carmen and Mary had a son, Frankie, who died at the age of 67, as well as four grandchildren and four great-grandchildren.

When their kids were young, Mary worked in retail and Carmen was a World War II veteran who worked as a contractor. One job involved painting the numbers on the seats at Wrigley Field.

The couple loved ballroom dancing and Carmen played the harmonica, their daughters recounted to GMA.

“My father would fill his pockets with change and do handstands for the kids on the block,” Grazian said.

“I loved the fact that they were devoted to one another and always having fun,” Andringa added. “When [local news] featured their 75th anniversary story, my mom said, ‘We always kiss each other goodnight … we never went to bed angry.'”

Scheier at Good Samaritan said getting to know the Sicilianos and seeing their persisting love was not only a pleasure, but it raised the spirits of those in the hospital.

“They brought a lot of inspiration and comfort to Good Sam,” she said.

“Watching their love story play out brought a lot of smiles to our team members’ faces. They were often referred to as the real-life ‘Notebook’ story.”

Hearing about the Sicilianos and their long-lasting love is a poignant reminder of what’s at stake. It’s important to remain cautious, wear masks and wash our hands so we don’t infect at-risk people.

It also reminds us to appreciate hospital workers and their dedication — even when they have to make tough calls. These frontline workers are true heroes and the ones that will carry us through. We must be grateful for their tireless efforts.