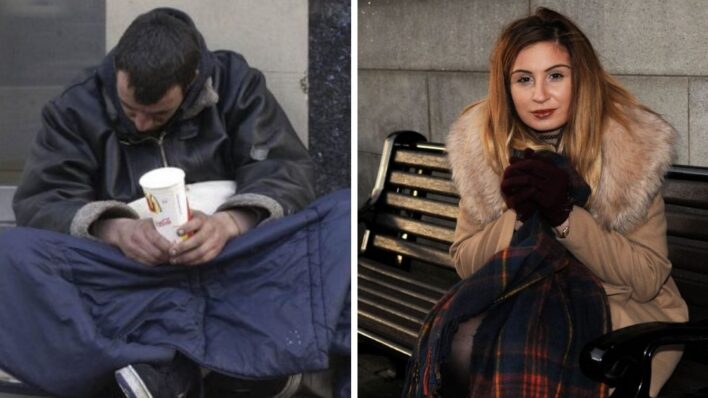 When Dominique Harrison-Bentzen, at the time 22, found herself stranded in the streets, she was saved by a homeless man. In an incredible act of selflessness, he offered her his last remaining £3 so she could pay for a taxi to get home safely.
By Aly Walansky    September 8, 2020

When Dominique Harrison-Bentzen, at the time 22, found herself stranded in the streets, she was saved by a homeless man. In an incredible act of selflessness, he offered her his last remaining £3 so she could pay for a taxi to get home safely.

Homelessness is a tragic reality of the world we live in. While many believe that the people who live on the streets are there because of lack of effort on their part, the truth is much more complex. And it is important to be aware of that.

When Dominique Harrison-Bentzen, at the time 22, found herself stranded in the streets, she was saved by a homeless man. In an incredible act of selflessness, he offered her his last remaining £3 so she could pay for a taxi to get home safely.

He found himself homeless

Only 7 months before she met him, the man, Robbie, had not been homeless. As it happens in many cases, circumstances put him in the streets.

He has been homeless for seven months through no fault of his own and he can’t get work due to having no address.

The conditions of homelessness make it even more difficult to find stable employment and get out of the streets. Despite it all, Robbie never lost his kindness. Many remember that he has come to their help in Preston city centre, returning lost wallets to walkers and offering his own scarf to keep others warm.

If you want to make a positive change in the world, watch this Goalcast video:

He noticed that she was in distress

The unlikely friends met when Dominique was trying to get home and realized she had no money. She had lost her bank card after a night out.

I suddenly realised that I had no money and a homeless man approached me with his only change of £3. He insisted I took it to pay for a taxi to make sure I got home safe.

Dominique didn’t take his money but his kindness left a lasting mark on her. She vowed she would help him back.

She set out on a mission to help him

As it turns out, Robbie’s incredible kindness had left a mark on many others, which helped Dominique in finding him again after that fateful meeting.

I ended up posting a status on Facebook to try and find him the next day and it turns out I’m not the only person he has helped.

Even though finding him was not easy, Dominique never gave up.

It took me four nights of driving round Preston to find him and I was beginning to lose hope that I would see him again, to thank him personally for his kindness.

“Luckily I had my mum and her car to help me,” she added.

She vowed to help him get back on his feet–by spending 24 hours as a homeless person.

Dominique voluntarily stranded herself in the street trying to raise money so that Robbie, can have enough to get a flat to sleep in. For her, it was important to truly understand the struggles homeless people face on the daily. “And I simply can’t just give him the money, I have to go through the right channels so I will be spending 24 hours through the day and night as a homeless person to understand the difficulties they face each day,” Dominique said.

“If people can sponsor me £3 – as Robbie attempted to give me his only £3 – in the hope of collecting enough to get Robbie a flat deposit so that he can be safe and warm.”

At first, the goal was to raise £500 for Robbie–but the results were mind blowing. “I just set a target of £500 which seems small now but at the time it seemed massive – I gave myself a week to do it and my mum said ‘That’s a bit ambitious’.”

They ended up raising £42k to a charity

Though the goal of her fundraising started small, Dominique had no idea that it would yield such incredible results. Teaming up with the Knowsley Street-based Foxton Centre, Dominique ended up raising over £42k.

Throughout it all, Robbie’s selflessness shines through.

Robbie was very keen right from the start that any money over his need would go to help other people.

Dominique has one lasting message for everyone:

If people can see what I am doing then maybe they can take the time to just stop and talk to a homeless person, hear their story.