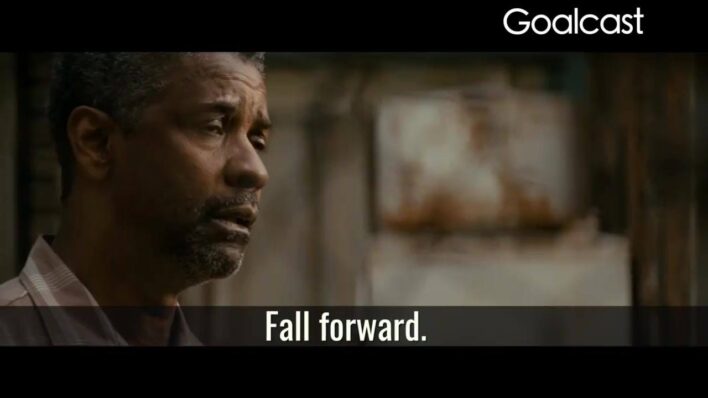 How Denzel Washington Failed His Way To Success

In this moving and personal speech, Academy Award-winner Denzel Washington reminds us that sometimes you need to fall down a thousand times before you can soar.

“You will fail at some point in your life, accept it. You will lose, you will embarrass yourself, you will suck at something, there’s no doubt about it. I was a 1.8 GPA one semester, and the university very politely suggested that it might be better to take some time off.

“I was 20 years old, I was at my lowest point, but here’s the thing, I didn’t quit. I didn’t fall back, but I continued to fail, and fail, and fail, but it didn’t matter, because you know what? There’s an old saying, ‘You hang around the barbershop long enough, sooner or later you’re going to get a haircut.’ So you will catch a break, and I did catch a break.

“Last year, I did a play called Fences, on Broadway. It was at the same theater that I’d failed at first audition 30 years prior. Thomas Edison conducted 1000 failed experiments. Did you know that? I didn’t know that, because the 1001st was the light bulb.

“Fall forward. Sometimes, it’s the best way to figure out where you’re going. Never be discouraged, never hold back, give everything you got, and when you fall throughout life remember this: fall forward.”