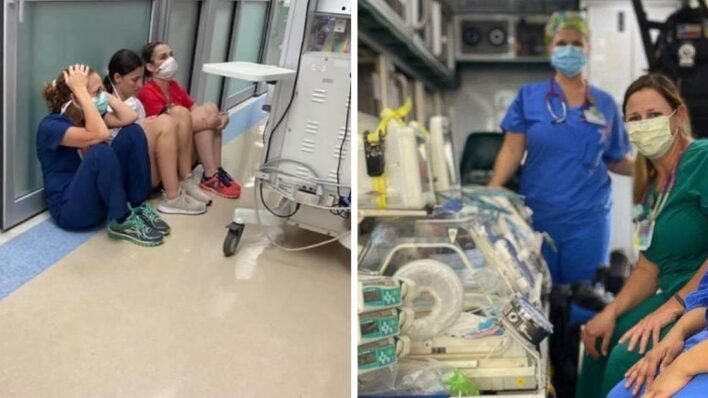 The heroic staff at Lake Charles Memorial Hospital did everything to make sure their most vulnerable patients–19 babies, some born prematurely–would have every chance to survive the long night as Hurricane Laura hit the city.
By Kawter    August 28, 2020

The heroic staff at Lake Charles Memorial Hospital did everything to make sure their most vulnerable patients–19 babies, some born prematurely–would have every chance to survive the long night as Hurricane Laura hit the city.

One of the most powerful storms in American history, Hurricane Laura hit Louisiana on Thursday the 27th of August 2020. A category 4 storm, it caused considerable damage and took the lives of 6 people so far, including a 14-year-old girl.

And while evacuation was mandatory, with winds of 120-135 mph that lasted an hour, the staff at the Lake Charles Memorial Hospital could not leave their most vulnerable patients behind.

The heroic nurses stayed behind

As the hurricane hit the hospital, the staff were confronted to howling winds and water leaking through windows. The generators were hard at work, to keep the power steady.

Even in these frightening conditions, the courageous staff could not leave behind the 19 babies in the Neonatal intensive care unit.

“It’s important to know the dedication of all the nurses and the respiratory therapists to keep taking care of the babies when they don’t even know the condition of their homes,” Dr. Juan Bossano told CNN on Thursday.

In a small town like this, people have to pull together. I’m proud of them.

First, they moved the babies to a safer place

Anticipating the threat of flooding, they evacuated the babies from Lake Charles Memorial Hospital for Women to the main hospital.

They did it in record time, 19 babies across the city in under two hours.

Everyone pulled in together to make sure the little ones would be safe. Doctors, residents, the sheriff’s department and other helpers assisted with the transportation of all the precious equipment and supplies needed by the staff to keep the babies safe.

We had 19 NICU babies with four on ventilators, some of them very sick, and we were out in 2 hours. I have never seen something work so quick and so smooth for something that was unexpected.

It was a difficult night to say the least

Dr. Bossano, a neonatalogist stayed behind along with a team of 14 nurses, 2 neonatal nurse practitioners and 3 respiratory therapists. They separated in two teams and took turn to take care of the babies, while the other half would get some rest, as best as they could considering the threatening storm that raged outside.

They had to stay behind because some of the babies had been born premature at just 23 weeks, weighing as little as one or two pounds. Some of them also had to be on ventilators and respirators and needed supervision.

Working under hurricane conditions was not easy. In the middle of the night, the water went out. And they had no air conditioning.

“It was scary for everyone,” Alesha Alford told CNN.

When the winds got so bad, we had to move our patients into the hallways. Staff were sleeping in the hallways with patients.

Watch this Goalcast video if you need strength after trauma:

They kept the parents updated–even through the storm

During the crazy night, they found a way to keep the parents of these babies updated. One could only imagine how worried they were, not being able to be physically there with their child.

But Dr. Bossano anticipated their needs, and kept the parents updated on the babies on his Facebook page. He wrote that the little ones “were doing better than all of us.” In fact, as Bossano said, “the tiny patients had already had a wild ride before the hurricane blew through.”

They are in for yet another ambulance ride

Hurricane Laura cut off the water service in the main hospital. While they survived the terrifying night, the babies will have to be transferred to other hospitals in the state, as Lake Charles only has two NICUs.

And after the storm, the courageous staff was able to take some time to rest–although the work is far from over.

This morning because the babies were stable, I got a couple of hours of sleep — we are still in the hospital.

Dr. Bossano will coordinate the transfers of all the 19 babies to make sure it goes smoothly and safely.

Recognize the power of community

Despite the dangers of a category 4 hurricane, the community at Lake Charles pulled together to make sure the most vulnerable would have every chance to survive.

It testifies to the power of community. Not only did the staff put themselves in the way of potential danger, the rest of the community also helped in securing the little angels. Their story proves that together, we can overcome even the scariest of challenges.