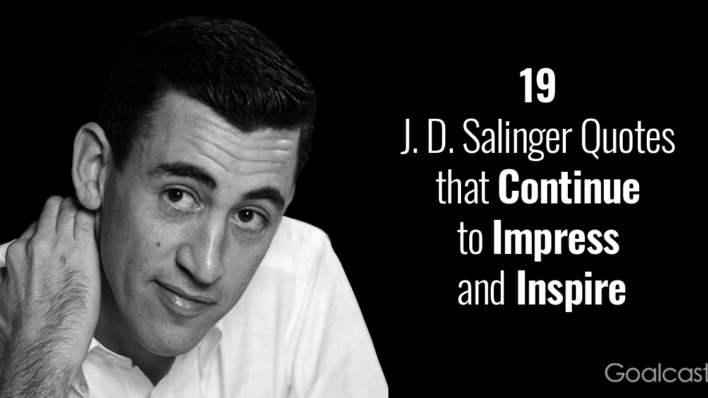 19 J. D. Salinger Quotes that Continue to Impress and Inspire

J.D. Salinger, in full Jerome David Salinger, was a reclusive American writer, widely recognized for his groundbreaking novel The Catcher

J.D. Salinger, in full Jerome David Salinger, was a reclusive American writer, widely recognized for his groundbreaking novel The Catcher in the Rye.

Salinger fell in love with literature and writing at a young age, but since his father didn’t approve of his passion, he used to write short stories at night, under his blanket with the help of a flashlight.

Even though he had a certain dislike for formal education, Salinger attended New York and Columbia universities for a brief period then decided to devote his entire time to writing. Even while serving the army he carried a portable typewriter and kept on doing what he loved the most.

Salinger’s career took off when The New Yorker magazine started publishing his stories. Some of the best rely on the author’s wartime experiences. But while he wanted his work to be known by many, Salinger himself remained a mystery. After The Catcher in the Rye was out, the author became reclusive, struggled with unwanted attention and did his best to stay away from those who constantly tried to pry into his personal life.

Here are 19 J. D. Salinger quotes that continue to impress and inspire. I think that one of these days, you’re going to have to find out where you want to go. And then you’ve got to start going there. But immediately. You can’t afford to lose a minute. Not you.

I’m sick of just liking people. I wish to God I could meet somebody I could respect.

Certain things, they should stay the way they are. You ought to be able to stick them in one of those big glass cases and just leave them alone.

I have scars on my hands from touching certain people… Certain heads, certain colors and textures of human hair leave permanent marks on me.

All morons hate it when you call them a moron.

It’s funny. All you have to do is say something nobody understands and they’ll do practically anything you want them to.

There are still a few men who love desperately.

I’m a kind of paranoiac in reverse. I suspect people of plotting to make me happy.

Who wants flowers when you’re dead? Nobody. Make sure you marry someone who laughs at the same things you do.

I’m just sick of ego, ego, ego. My own and everybody else’s.

She wasn’t doing a thing that I could see, except standing there leaning on the balcony railing, holding the universe together.

If you do something too good, then, after a while, if you don’t watch it, you start showing off. And then you’re not as good anymore.

If a girl looks swell when she meets you, who gives a damn if she’s late?

Goddam money. It always ends up making you blue as hell.

The fact is always obvious much too late, but the most singular difference between happiness and joy is that happiness is a solid and joy a liquid.

I don’t know what good it is to know so much and be smart as whips and all if it doesn’t make you happy.