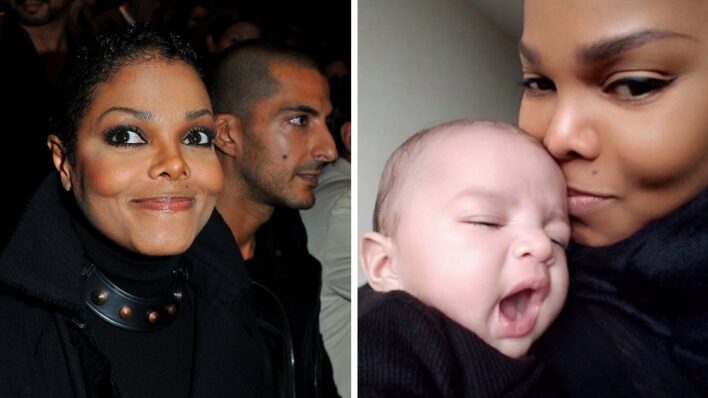 At 50, Janet Jackson gave birth to her son Eissa, which prompted a lot of questions and conclusions from the public. So what is the truth?
By Shaoni Das    December 9, 2020

At 50, Janet Jackson gave birth to her son Eissa, which prompted a lot of questions and conclusions from the public. So what is the truth?

Though Janet Jackson isn’t a hot topic of discussion these days, no one can deny that she’s one of the most famous pop singers of all time. People forget that she’s still a thriving artist who’s continuing to release singles, produce albums, and perform for her fans whenever she has the chance. Instead of cherishing her artistry and dynamic stage presence, the media and the public continue to put her through the wringer.

Janet’s public reputation is mostly dominated by her controversial performance at the Superbowl 2004 half-time show — an incident that spoke to the double standards prevalent in society and the entertainment industry. Yet the singer also grabbed headlines in 2017 when it was announced that she’d become a mother to her son Eissa.

Celebrities having babies is hardly a newsworthy item, but Janet’s age made her pregnancy a subject of intense discussion and speculation. Instead of celebrating a woman’s journey through pregnancy and motherhood, the media chose to sensationalize the story, which, in turn, had adverse effects of its own.

This is why it’s crucial to examine Janet Jackson’s evolution over the last few years and take notes on how the media portrayed a massive chapter in her life.

Janet did what many think it’s impossible — conceive at nearly fifty years old. At the time, she was married to businessman Wissam Al Mana and, by all public accounts, was able to get pregnant naturally. She never divulged to the media whether she had been on any kind of fertility treatment but as far as one can tell, the pregnancy was smooth. Janet’s representatives also confirmed shortly after Eissa’s birth that the delivery was “stress-free.”

Though the whole situation was as simple as it could, it didn’t stop the tabloids from jumping into conclusions and cooking up crazy theories about her pregnancy. But Janet herself has never concerned herself with revealing the truth or dismissing the information. To her, it’s God’s greatest gift that she was able to get pregnant at such an age.

When asked about when she feels the most beautiful, Janet said:

I feel most beautiful when I’m with my son, because of the gift that God has given me and that he allowed me to do so at that age.

Janet also credited her trainer for helping her body adapt to a pregnancy at her age. Janet is someone who achieved fame as a teenager, and therefore had to spend the majority of her life in the public eye. It’s not a surprise that she got caught up in body image issues and began to feel self-conscious about most of her features. But welcoming a baby into the world reiterated what truly mattered and that she couldn’t afford to waste even a second on these trivial details.

Shortly after Eissa’s birth, Janet separated from her husband. Being a working single mother meant that she had to find time for her child no matter what. Janet said the hectic showbiz life can become overwhelming for any artist but being able to hold her son at the end of the day makes everything just a little better. She added:

love is limitless […] day after day and night after night, holding my baby in my arms, i am at peace. i am blessed. i feel bliss. in those moments, all is right with the world.

Yet the media made a mess of the whole pregnancy

Janet’s pregnancy may have brought a world of joy into her life but the media’s approach to covering this news story has been riddled with missteps. From the onset, they’ve been treating the pregnancy as some sort of a massive mystery that needs to be dissected to no end. Articles were written about the various scenarios that could’ve been made the pregnancy possible. Doctors were called, fertility experts weighed in, and women were told that anything was possible as long as they believed.

The problem with such immense and fruitless speculation is that, ultimately, that’s all it is. Speculation doesn’t lead to any concrete evidence or answers. Janet herself has chosen not to share how she was able to get pregnant at 49, and she’s entitled to maintaining her privacy. Given that the media didn’t have any hard proof over how this pregnancy took place, they should’ve dropped it and let Janet be.

Instead, they pushed hard at the story, coming up with theories, drawing up hypotheticals, and offering false hope to other women desperately hoping to get pregnant. Women struggling with fertility would read the story and begin to wonder a range of things. Starting from “Is there something wrong with my body that Janet could get pregnant and I couldn’t?” to “It’s going to happen to me as well.”

The first thought reflects shame, something that exacerbates the stigma around older moms, whereas the second feeling of confidence might be setting you up for failure. Both shame and confidence can have a negative affect here, so it’s key to offer no certainties when covering such sensitive stories.

At the end of the day, it’s about having realistic expectations when looking at celebrities. Janet very well may have frozen her eggs or gone through IVF but it’s not for the public or the media to speculate. If she’s not choosing to share it, then there must be a reason behind that.  We can’t dictate our own lives based on what celebrities may or may not have done.

Be practical about life’s biggest decisions

Janet’s lucky enough to be experiencing young motherhood in her fifties; most women are not going to be as fortunate as her. Some might strike lightning but many are going to fail and will have to look through alternative options. Such is this thing we call life.

But what’s important to remember is that we cannot sensationalize celebrities and their life stories. We can try to emulate their courage, their determination, and passion, but when it comes to life’s biggest decisions, you’re going to have to be cautious and practical. Just because something’s worked for someone else doesn’t mean it’s going to work for you, and vice versa: just because something hasn’t worked for someone else doesn’t mean it’s not going work for you. You’re your own person, and your most significant moments cannot be boiled down to a tabloid article. So the next time you hear opinions about Janet’s pregnancy, just be happy for the woman and carry on.