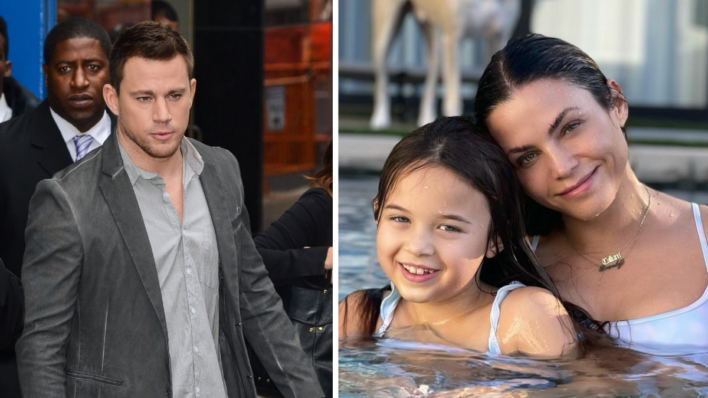 Jenna Dewan comments on her mental health post-partum and ex Channing Tatum’s absence in their daughter’s life due to work commitments.
By Shaoni Das    August 6, 2021

Jenna Dewan comments on her mental health post-partum and ex Channing Tatum’s absence in their daughter’s life due to work commitments.

At their pinnacle, Channing Tatum and Jenna Dewan were one of the most fabulous, amusing, and charming couples around. They were glamorous, they were fun, they took part in exhilarating lip-sync battles with Beyonce — everything was as rosy and carefree as anyone could imagine.

However, the dream died, the love faded, and the couple decided to end their marriage. There’s always a collective sense of heartbreak when one of Hollywood’s most beloved pairings heads towards splitsville, as if we’re personally living through the motions of a disintegrating marriage; as if we understand what it’s like to have our complete lives up for public consumption.

In such a case, the masses are known for jumping to conclusions and forging baseless narratives. That’s exactly what happened over the past week as Jenna opened up about her life on the podcast Dear Gabby. The episode was supposed to delve into the actress’s complex, fragile emotions surrounding motherhood, but instead, it ended up causing quite the ruckus over Channing’s parenting choices.

So what did Jenna say about Channing’s approach to fatherhood, and what does the larger controversy convey about our culture?

In the podcast, Jenna revealed how challenging it had been to balance her newfound motherhood duties against her work responsibilities. Both she and Channing were busy, in-demand actors at the time of their daughter Everly’s birth and their schedules were jam-packed with a series of projects one after the other. The Step Up actress shared how she spent the bulk of the pregnancy without Channing as he was busy filming movies all across the world. Experiencing the pains and fears of pregnancy is daunting enough as it is, but to do so without your partner by your side is a whole another battle. “At the time, Chan wasn’t available to be with us, for the most part,” she said.

I had a lot of postpartum anxiety. It was like I just never stopped. You know, you’re up a couple times in the night, and you’re working all day. I was breastfeeding, I was pumping, I was without a partner. I mean, it was just craziness.

Jenna eventually traveled to London to have Channing attend the delivery. Everly was born May 30, 2018, and while her arrival brought tremendous bliss to mom and dad, they couldn’t savor the moment in all its glory. Both returned to work almost immediately, and Jenna flew to Vancouver, with her week-old child in tow, for her next professional commitment.

The weeks leading up to and following the birth of your child are absolutely crucial to your preparation for parenthood, so when these circumstances are lacking in some way, they’re bound to impact your perception and how you acclimate to the role. While Jenna was fortunate enough to have her baby on-set, it wasn’t the same as getting one-on-one time in the comfort of her own home. She was getting pulled in too many directions, and it made her doubt her own abilities as a mother. The dancer developed post-partum anxiety and couldn’t cope with the pressures of juggling all these obligations at once.

She slammed baseless assumptions about her ex- husband

While some perceived Jenna’s account as heartfelt, honest, and valuable, others decided to interpret her personal admission as some sort of an attack on Channing. Just because he had been working through his baby’s birth doesn’t mean he’s any less capable as a father or that he doesn’t prioritize his daughter. Perhaps he is overcome with regret about the situation but understands that it’s not always possible to drop everything to support your partner through a terrifying pregnancy and the post-birth phase. Sometimes it’s an uphill struggle to even determine whether your partner needs hands-on care or if they prefer tackling their predicament on their own.

Yet, the keyboard warriors decided to spam Jenna’s social media, attributing her difficulties to Channing’s supposed lack of concern for his family. They painted him as the traditional, selfish breadwinner who couldn’t bother himself with domestic duties or backing his partner at her most vulnerable.

The pushback became so intense Jenna herself had to come online and defend her ex-husband against the trolls. She urged her followers to recenter the conversation and focus on the primary issue being discussed – postpartum anxiety and depression. She wrote that the media simply “pulled” select quotes to make it appear she was disparaging Channing, something she stated she would “never do.”

As two working parents, we both faced challenges at the time, but I speak only for myself and not about him.

The 41-year-old added she was only speaking for herself and her own perspective. Never did she intend to depict Channing as someone he was not; she only wanted to establish the reality of parenthood in this day and age and how it is influenced by individual careers. Jenna’s words were “distorted for clicks” and “salacious gossip” and don’t even come close to addressing the heart of the matter.

Jenna’s defense of Channing highlights the value and beauty of an amicable divorce. Not everything is going to run according to plan, and a lot of outsiders are going to develop harsh, unjustifiable opinions that don’t have a single basis in truth, but as long as you and your ex-partner are on the same page and have adequate respect for each other, you will be able to ride out the storm. It’s unclear where Channing and Jenna stand as co-parents, but there’s no doubt both are equally close to their daughter Everly and are trying their best to raise her with compassion, stability, and understanding.

When I became a single father, I had a lot of fear about connecting to Everly in every way that a little girl might want […] I didn’t wear nail polish or know how to braid hair. But now I do both. I jumped with both feet into this magical world, and I was rewarded with a kind of love that I don’t think I would have ever been able to have otherwise.

Additionally, for all of Channing’s blunders, he’s done an exceptional job developing a tight, affectionate bond with his daughter. The 21 Jump Street star even authored a children’s picture book during quarantine called The One and Only Sparkella, inspired by his adventures with young Everly. He urges all “girl dads” to venture into their child’s universe and try to understand them and their vivid imaginations.

It’s always threatening to dismantle your nuclear family and proceed toward the world of single parenthood. However, as we’re seen with celebrities over and over again, divorce isn’t the end of the world. In fact, it can promote a beautiful partnership that’s built off mutual trust, respect, and empathy but without the pressure of romance or long-term togetherness. The ultimate goal is to ensure your child receives the utmost care and love, so if you have to put your own pains and discomfort aside, you will do it. Moreover, you have the advance of getting to know your ex-partner as someone completely different, someone thriving and flourishing on their own, that that in itself can be quite rewarding.