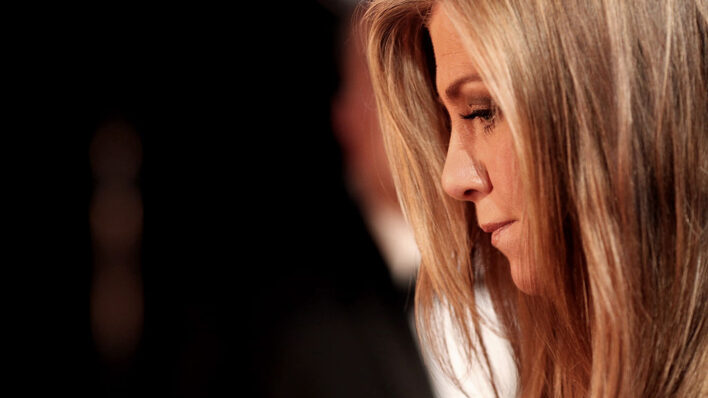 As far as women’s empowerment and equality has come in this world — and it’s come pretty far. We’re able
By Aly Walansky    July 17, 2019

As far as women’s empowerment and equality has come in this world — and it’s come pretty far. We’re able to vote, wear pants (believe it or not, that was a thing until fairly recently), serve in the military, and work many jobs once reserved as “men’s” jobs — there’s still an archaic belief that a woman’s only real role of importance is to be a wife and mother, and without that role, her life is meaningless.

I know it from my personal life. No matter what personal career achievements I make, my parents are constantly putting me down for not yet being married and making them grandparents. To them, nothing else matters, and so nothing I do really matters. Because I haven’t done that one thing, I am a failure.

Jennifer Aniston, rich, famous, and talented as she is, knows this struggle as well — she’s fought against gendered expectations of how she lives her life for the better part of 20 years now.

Famously married to Brad Pitt in the early 2000s, their marriage fell apart when he left her for Angelina Jolie, whom he met on a movie set. The tabloids framed Jolie as the temptress who lured Pitt away from the spurned Aniston.

To the media, Jennifer was a helpless victim who couldn’t move on

Throughout the next 15 years of “Brangelina,” Aniston was frequently cast as the wrench in the super-couple’s romance, forever on the verge of breaking them up, of welcoming a fleeing Pitt back with open arms.

Her marriage to Theroux lasted two years before the media was given a chance to spurn their “Aniston abandoned” narrative again. Now that Pitt’s marriage to Jolie has ended, the rumors are swirling that “Brad and Jen” could reunite.

“There is more to me than just a tabloid girl. This whole ‘Poor lonely Jen’ thing, this idea that I’m so unlucky in love? I actually feel I’ve been unbelievably lucky in love.”

For the past two decades, the media has given Jennifer Aniston hell for being “unlucky” in love and for not becoming a mom, even though she’s always maintained she is neither of those things.

We see that in a very public eye, as the world continues to pity Jennifer Aniston — a beautiful, healthy, and incredibly successful actress — because she too has not “yet” become a mother. Even as she’s constantly said she’s very happy with her life, people seem unable to accept that’s possible.

But it’s also very possible, and it’s the reality for many women.

I think people maybe want me to have a kid now… If it happens, it happens. I’m calm and peaceful with whatever the plan is.

Bringing life into the world is a wonderful thing. Many women find having children to be extremely fulfilling for themselves personally.

There is more than one way to be fulfilled

In fact, at times, women temporarily lose their identity while throwing their life into their children.

“It is true that if a woman holds a core belief that a woman must have children to feel fulfilled, then it can have a powerfully negative affect on her,” said Kim Chronister, PsyD, a licensed clinical psychologist.

However, if a woman does not subscribe to this myth and holds the perception that they do not need children to be happy, then they likely will be unphased.

The three magic ingredients for fulfillment

“We know from research that we need three ingredients to be tended to for a full identity and contentment,” said  Chronister.

These factors are: connection, meaning and purpose, and activity.

It can also be found when we are engaging in philanthropy. Tending to adult family members can be a hugely fulfilling of making or rediscovering connection.

As Aniston once said: “Where would you be without friends? The people to pick you up when you need lifting? We come from homes far from perfect, so you end up almost parent and sibling to your friends – your own chosen family. There’s nothing like a really loyal, dependable, good friend. Nothing.”

Meaning and purpose can be found in also be found through volunteer work, along with engaging in the arts, expressing yourself creatively, and excelling at work in your chosen field.

With an iconic TV career under her belt, Aniston has now turned her attention to film, where her career is thriving as well.

Lastly, having a very active lifestyle can be a major protective factor while also being a major pillar for identity and contentment.

Thus: “It is absolutely possible that Jennifer Aniston is fulfilled without children based on what we know from positive psychology research,” said Chronister.

“Our society has yet to expand its visions of what a fulfilling life can look like, and unfortunately one of the more common misconceptions is that women need to be married with kids to be happy,” says sex expert and author Antonia Hall. “Science backs up that not only are single, childless women happy, they live longer, have less illness and are happier than the rest of the population.”

And Aniston — gorgeous and fit and looking younger than ever in her 50s — is proof positive that we can forge our own paths to fulfillment with connection, purpose, and activity, rather than following the path set out for us by others.