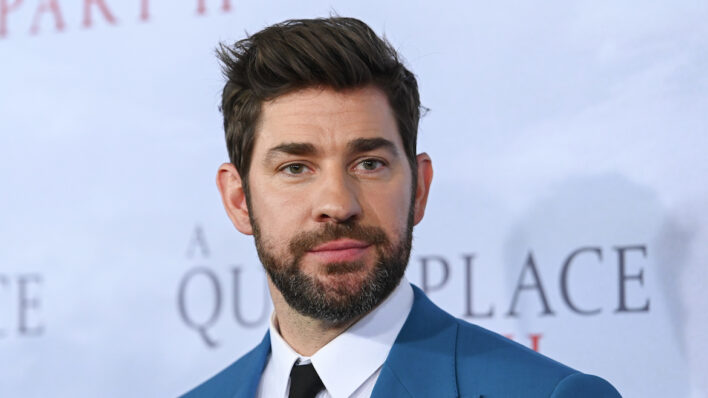 How John Krasinski Channeled His Parenting Fears Into His Craft

John Krasinski’s inspiring trajectory from actor to director takes a new meaning as he revealed what made his first directorial endeavor so poignant. He was able to channel his parenting fears into the making of A Quiet Place, which has made the movie resonate with many.
By Shaoni Das    March 24, 2020

John Krasinski’s inspiring trajectory from actor to director takes a new meaning as he revealed what made his first directorial endeavor so poignant. He was able to channel his parenting fears into the making of A Quiet Place, which has made the movie resonate with many.

A lot of us might not know him by name but if you happen to be a fan of The Office, you will absolutely recognize him by his face. John Krasinski may have gotten his footing in the acting industry by playing Jim in hit mockumentary-style TV show but as recent years have spelled out for us, he is a man of many immeasurable talents.

We know he can sell those awkward camera cutaways, as seen in the likes of The Office, and he is a fine romantic lead, both on and off the screen, but we would have never been able to guess that he would turn out to be proficient, innovative writer and director. His film A Quiet Place has gained a reputation for being one of the inventive, thoughtful horror movies in recent times, and rightfully so.

For those who haven’t had the pleasure of watching it just yet (and you really should get on board, by the way), it’s about a family navigating a post-apocalyptic universe in which alien monsters have wiped out most of civilization. And how do these monsters track down humans? Sound. Yup, that’s the catch. If the characters are caught making the slightest audible sound, the monsters hunt them down and presumably kill them.

The plot is simple but the execution much less so. In fact, it would have been a considerable challenge for any veteran director so we couldn’t imagine how John approached it. Thankfully, John Krasinski has since revealed how he was able to get rid of those newcomer jitters to craft a solid, engaging and ultimately intimate story about survival and family. As it happens, in this case, mixing the personal and the professional worked out for him after all.

He didn’t know how to keep his family safe

When the script for A Quiet Place, originally written by Bryan Woods and Scott Beck came into John’s attention, his wife and fellow actress Emily Blunt has just given birth to their youngest daughter Violet. They were already parents to their daughter, Hazel, who was two at the time.

As the father of two young daughters, he was naturally consumed by fears about fatherhood and how he could keep his children safe in what can be a very chaotic and cruel world.

Since the script features a father who would do anything to ensure the survival of his kids, John was able to put himself in that headspace and found that themes of the script hit much closer to home than he’d have expected.

The fact that it resonated with him so strongly left him with no doubt; he knew right there and then that he would do it. That’s when he began to make the rewrites to the script so that it could match much more closely to his interpretations.

In an interview with Deadline, John mentioned that he hadn’t initially wanted to cast his wife Emily into the film but once the suggestion was made, he’d basically thought there was “something elemental” about casting his actual wife to play his fictional wife in the film.

And that’s how I felt. The personal aspect to this was the driving engine that I couldn’t stop. Obviously, it’s every parent’s greatest fear; not creatures in the dark, but the idea that you can only protect your kids so much.

The familiarity of the script themes as well as the casting of his wife amounted to a surreal, life-changing experience for John in which he could practically see vivid and intense experiences and emotions from his own life reflected on the screen.

It was a huge gamble on his part, something that could make or break his directing career, but he knew that it was too personal to sacrifice. He decided to go all-in, and the results, if we can say so ourselves, have proved to be terrific.

He focused on humanity through and through

John Krasinski had never directed a horror film before; he’d actually been apprehensive about taking on such a feature as he had the deepest respect for horror films and their fans. But he told himself that the objective should never be about scaring viewers or baiting them with the usual jump scares.

He wanted to make a movie in which the characters spoke truthfully, where the characters made significant decisions for themselves and their loved ones — that is what would appeal to the viewers and make them connect to the story, not meaningless thrills or gore.

Even some of the visuals of the film emerged from his emotions regarding fatherhood, such as the scene with sand paths. He wanted to sketch a visual metaphor describing how much he loves his kids, and how much he was willing to give up for his kids.

Furthermore, the young daughter being the savior and superhero at the end of the film wasn’t written into the original script. That was one of John’s many creative decisions, and according to him, it was the most personal thing he’d ever done, as he told The Black List.

It’s been two years since A Quiet Place was released, and its sequel A Quiet Place Part II was just released last weekend. John Krasinski’s directing style has evolved alongside the plotline and themes of the sequel. Whereas the first film was declared by John as a love letter to his kids, the second film deals with growing up and learning to live without the safety net of our own parents; it’s about finding community in the worst of times and surviving in the face of destruction.

The power of looking inward

We’re all drawn by art in some way or the other. For some people, being able to create art is what drives them. For others, getting to cherish it in any form is what makes life worth living. A lot of us are envisioning how we can make art of our own, how we can pull together the distinct ideas and emotions whirling around in our heads.

Much like John Krasinski, we also doubt how we can get those raw ideas and turn them into finished products worthy of being savored and enjoyed by others.

John Krasinski’s directorial efforts have shown us that we only have to look inward to find the impulses, fears and emotions that drive us. If we can tap into those feelings and take the time to express them through a healthy outlet, then we have the potential to truly connect with others.

The most brilliant, unforgettable works of art are a result of authentic human experiences and emotions, so we have to remember it’s those primal emotions that lend meaning to our art as well as our lives. And if we can emulate that, then we’ll be able to achieve great things.

Looking for a fun resource for you and your children? Check out our article on quotes from Winnie the Pooh.