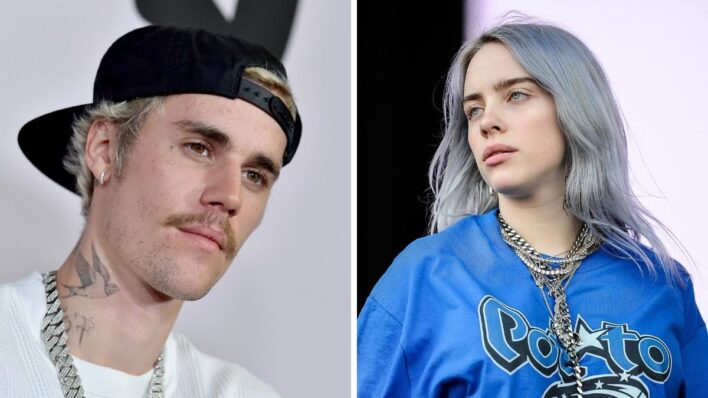 Justin Bieber has been a driving inspiration for Billie Eilish, who had massive crush on him growing up. What was it like to finally meet her idol?
By Shaoni Das    March 1, 2021

Justin Bieber has been a driving inspiration for Billie Eilish, who had massive crush on him growing up. What was it like to finally meet her idol?

In just a few short years, Billie Eilish has become a Gen-Z favorite.

Whether it’s her mumblecore vocals, her unconventional style of clothing or her ability to speak honestly about mental health and her experience of Tourette’s syndrome, something about her has clearly struck a chord with millions of young people across the world.

The recent documentary Billie Eilish: The World’s a Little Blurry chronicles the artist’s swift rise to fame and depicts the highs and lows that have been taking place behind the scenes. As one can imagine, you could be the hottest, most beloved pop star in the world, but that doesn’t protect you from internal struggles, insecurities, or pains. And if the artist isn’t careful enough, the same challenges could spill over into their career and topple them over just as rapidly.

Justin Bieber is a classic example of a young artist who went off the rails at the height of his fame, but he was able to recuperate and build his reputation back up from the ground. Oddly enough, Justin has been the driving inspiration for Billie herself, and the documentary sheds light on their evolving relationship over the years. Here’s what we can learn from their friendship:

When Bieber fever swept over across the world in the early 2010s, Billie never thought that she’d one day meet her idol in person. Billie was one among thousands, if not millions, of fans who had Bieber’s posters plastered all over her wall. She knew his birthdate, his place of birth, his hometown, and pretty much every single detail about his career and personal life. Indeed, she had confidently conceived of an entire relationship with Justin Bieber, where he knew of her existence and was equally in love with her as she had been with him, even though Billie was nowhere near stardom at that point.

Her obsession with Bieber had been so intense that Billie’s folks considered sending her to therapy at one point. Her mom, Maggie Baird, shared in the documentary that they witnessed Billie’s overwhelming adoration for Bieber and wondered, “How are we going to cope with this?” To give an example, Billie would actively break down in tears while listening to Justin’s song ‘As Long As You Love Me,’ released in 2012. She would cry in the car, at the dining table, or wherever her emotions overcame her.

I just want to say we did consider taking you to therapy for how incredibly…you were in so much pain over Justin Bieber.

To no one’s surprise, Billie’s first meeting with Justin Bieber was a total emotional rollercoaster. Thanks to the age of social media and 24/7, Billie’s reaction is available online for everyone’s viewing pleasure.

The interaction was prompted by Justin Bieber’s DM to Billie, sent during Coachella 2019. He actually resent a DM that Billie had sent him in the first place when she was a diehard fan. The two met during Ariana Grande’s headlining set, and you can tell from Billie’s flustered body language that the moment meant everything to her.

Billie’s parents discussed this moment in the documentary, saying, “she sobbed in his arms. He was so sweet to her, and it meant so much to her. And it seemed to have meant a lot to him.”

On the very same day, Justin posted a photo of himself and Billie, the caption reading, “So, this happened… Long and bright future ahead for you.” Billie also discussed the weekend in an Instagram story the same evening, saying, “Some of the most life-changing things I’ll ever experience happened over the weekend.” She said that she was completely “moved” by the moment and still hadn’t processed it.

It’s safe to say that Billie’s long-awaited first meeting with her idol had gone better than she could have ever hoped for. What’s different for her is that she wasn’t just any old fan that Bieber would likely never meet again. He kept checking in on her throughout the year and even Facetimed her when she historically won five Grammys in February 2019. He told her that he’s “proud” of her, to which she replied, “thanks to you.”

In an interview with Apple Music, Justin teared up while talking about Billie Eilish and his need to protect her. Having experienced stardom at a shockingly young age, Justin knows all too well about being careful of not only others, but yourself. In some way or the other, he played a role in Billie’s journey thus far, so it’s not too surprising that he feels somewhat responsible for whatever she may or may not go through.

He spoke about the deceptive nature of fame in that people can be shouting out their love for you in one second, but they “turn their back on you” in the next. You don’t know who to trust, and you feel broken, lonely, and hopeless, which becomes an impetus for bad decisions all over the place.

Their young but powerful friendship proves that Justin has been more than willing to follow through on his promise. Billie’s reaction to seeing the emotional video also reiterates how much she values his presence in her life. She posted a bunch of photos of her childhood bedroom wall decked out in Bieber merchandise and captioned “Stream changes,” referring to Bieber’s latest album.

Justin could have very well taken a few photos with Billie and left her alone for good following their viral interaction. Yet, he decided to strike up a friendship and undertake the role of a mentor. He has experienced some horrific things in the industry and has made mistakes of his own as well. Rather than locking those memories up in a box, he has decided to protect Billie and watch her back as she explores this wild world out there by herself.

The darkest moments of your life can be a learning lesson for someone else. You can actively make a difference in someone else’s life if you decide to direct your pain for good — for the purpose of creating love and friendship. Justin might have never expected one of his screaming young fans to become a contemporary, but now that she has, he’s chosen to take the more responsible route and keep her safe.